Check out the rumored specs for what could be HTC’s newest Windows Phone 8 model.

HTC got off to a good start with Windows Phone 8, releasing the Windows Phone 8S and 8X (above), but while we’ve seen Nokia take the platform and positively run with it, HTC hasn’t given us anything new since then. It sounds like that’s all about to change, as a leaked spec sheet reveals a new HTC WP8 model, while some comments by a company exec cement its dedication to the OS.

The HTC Tiara appears to be a mid-range WP8 smartphone. Spec-wise, it falls somewhere between the 8S and 8X, having a 4.3inch screen that’s only WVGA, but also getting a full 1GB of RAM and an eight-megapixel camera. Similarly, its rumored 1.2GHz dual-core Snapdragon splits the difference between the SoC in the 8S and 8X. Maybe HTC will choose a retail name for the phone that fits this pattern – something like the 8V.

It’s also interesting to note that the phone is slated to arrive running Windows Phone 8 GDR2, a forthcoming WP8 update from Microsoft. Unwired View, which uncovered this info, believes that Tiara will launch sometime around the middle of May.

Separately, HTC’s Vice President for Global Product Planning, Tai Ito, had a little to say about Windows Phone at the MWC, addressing some of the struggles the platform has faced but making it clear, “we are actually fully committed to our Windows Phone business. We do have good collaboration with Microsoft for a future release this year.” The question now is if he was talking about Tiara, or if there will possibly be another WP8 model from HTC later in the year. 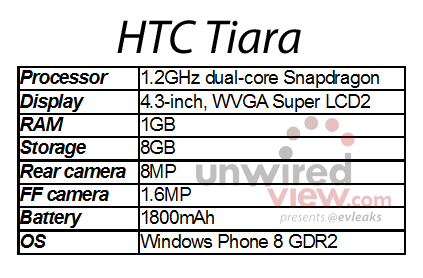