Ultrapixel versus Pureview. HTC decided to go with a combination of lower overall image size but larger pixels on its sensor. Is it enough when compared to the Nokia 808 PureView? Check it out!
Published 16 March 2013, 06:11 EDTUpdated 01 April 2021, 14:06 EDT

Update: By popular demand we added a side-by-side video comparison at the bottom of this post; you can check it out in addition to the raw video files.

We’ve recently compared the camera performance on the new HTC One with the imaging capabilities of the Verizon HTC Droid DNA, as well as the PureView on the Nokia Lumia 920. However, the Lumia 920 features a completely different PureView technology than the one on the 808 PureView; the Lumia 920’s imaging capabilities are focused mainly on low-light performance and optical-image-stabilization, while the 808 PureView is all about oversampling and creation of “superpixels”. To find out more about how the Nokia 808 does that, make sure to read this article about the PureView technology, in its first iteration.

HTC chose to be different from everybody out there: the Taiwanese company decided that they will no longer participate in the megapixel race and instead, they invented the “ultrapixel”. Basically the sensor on the HTC One features larger pixels for better low light sensitivity and, on paper, better overall camera performance. Clarity, contrast, detail, and light, these are the advantages called out by HTC on their official camera feature presentations. The downside? Images max out at four megapixels which is more than enough for most users out there — even if you consider printing the images; however, for certain users’ specific needs and usage scenarios, these “smaller” images are not enough, especially if you want to zoom in on the picture for crops and details.

We have to understand that “ultrapixel” is just HTC’s marketing team saying that the pixels on the HTC One’s sensor are larger. Here’s how it works: the sensor on the HTC One isn’t larger than the sensors on other modern phones: 1/3.2-inch is what HTC used in the One and the same size is also present on the iPhone 5, Galaxy S III, or Lumia 920. A larger sensor means having something like the Nokia 808 PureView has with its 1/1.2 inch sensor. 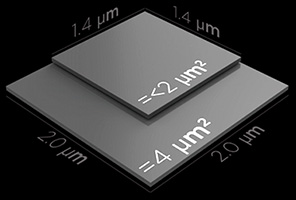 Nothing extraordinary so far. However, while other 1/3.2-inch sensors pack eight-ish-megapixels on the surface, HTC only packed four-megapixels (ahem ultrapixels) there. Think of it as population density for two cities which are exactly the same in terms of surface but twice as more people live in one compared to the other.

Having less pixels per the same surface, HTC’s pixels are larger, thus, according to HTC, allowing for better light sensitivity. Just how large an ultrapixel is compared to a “regular pixel? Two-micrometers (compared to 1.4-micrometers on  the iPhone 5, Galaxy S III, or Lumia 920). That’s two-thousandth of a millimeter (0.002 mm, or about 0.0000787 inches).

However, logic dictates that you sacrifice something for something in return; HTC sacrificed image size, going for a lower overall output and they hope to get the perfect still in return. Is this the case? We’re stacking the HTC One against the best camera-phone out there, Nokia’s proof-of-concept phone, the 808 PureView.

Note: PureView, in the 808 sense, means taking advantage of oversampling to generate “superpixels”. The images below are PureView images and not full-resolution 38-megapixel images (which are not PureView stills).

We could be closer to getting better periscope cameras in future iPhone models, thanks to Apple’s latest “Folded Camera” system

Recent reports claim that Honor could be very close to launching a new foldable smartphone that would be very similar to Huawei’s Mate X series.

Apple is reportedly working on bringing Face ID to Mac computers, MacBook Pros, and cheaper iPhones and iPad models within the next “couple of years”,