HTC One mini 2 is a pint-sized One M8, launching in June

The HTC One mini 2 is a pint-sized aluminum smartphone meant to bring the high-end experience of the One M8 to a more compact form factor.

While it’s suffered nowhere near as much early exposure as its higher-end sibling, HTC’s newest product has been breaking cover in bits and pieces since earlier this month. Today, the company finally took the wraps off of the “lite” version of its well-received HTC One M8, this time eschewing the latter’s esoteric codename for the more straightforward “HTC One mini 2.”

Like its 2013 predecessor, the One mini 2 more closely resembles its big brother in looks than in specs. As we expected, a 1.2GHz quad-core Snapdragon 400 sits under the hood, backed up by 1GB of RAM and 16GB of storage (about 10.5GB of which is available to the user out of the box). The MicroSD slot has made the jump from the larger One, supporting the same 128GB maximum card size, and the phone’s battery tops out at 2100 mAh.

If you sense something missing from the title image above, congratulations on a sharp eye. Those rumors we heard about the One mini 2 dropping the Duo Camera were spot-on; HTC has ditched the One M8’s twin-sensor setup for a more conventional 13MP primary camera on the smaller device, while the front-facing shooter remains a 5MP sensor mated to a wide-angle lens. 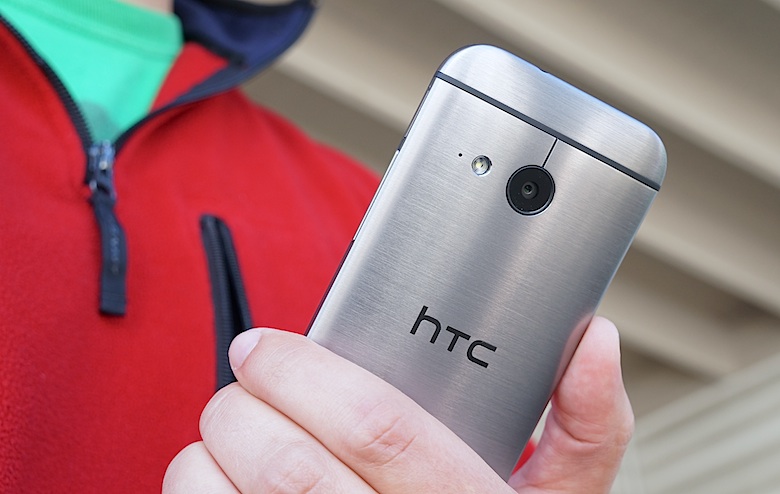 It’s all wrapped up in a 10.6mm-thick aluminum casing that masses 137g and comes in a choice of three colors – the same Amber Gold, Glacial Silver, and Gunmetal Gray of the One M8. The display around front is a 4.5-inch, 720p LCD, and waking it requires a button press: there’s no “sensor hub” here as on the M8, eliminating the possibility of gesture-based unlocks. Speaking of buttons, a fun tidbit of trivia for the collectors in the audience: HTC informs us that the volume rocker on the first production run of Gunmetal Gray units is silver, while devices in follow-on batches will feature volume keys that better match the phone’s casing.

If you’re already wondering how to get your hands on an HTC One mini 2 of your own, you’d better live in Europe, the Middle East, Asia, or Northern Asia, as those are the markets HTC is targeting with its initial rollout in June. HTC wouldn’t comment on plans for other markets or pricing details, but if rumors from some Finnish retailers turn out to be true, we could be looking at a price point around $700.

HTC has loaned us a pre-production One mini 2 unit, which we’ll be reviewing in the coming weeks. Until then, check out Pocketnow’s first hands-on video below, and leave us a comment letting us know what you think about the device – and what you’d most like to see us cover in our full review!