HTC One max review rebuttal: it’s bigger than you imagined

It’s been a couple of months since we first looked at the HTC One max. Now that the Sprint version has been released, let’s take another look.

As efforts like After The Buzz, the Pocketnow U-Review, and Empty Nest demonstrate, we’re constantly searching for fresh ways to review mobile technology. The newest product of those efforts is Pocketnow’s “Review Rebuttal” series, in which a member of our team is assigned to test a smartphone or tablet that’s already gone through our standard review process. While the resulting video or editorial doesn’t affect the “official” Pocketnow review score, we hope it provides added context by showcasing an editor’s personal opinion, rather than a teamwide consensus.

We call it the “rebuttal” because the new opinion often differs significantly from the thrust of the original review. Rather than reject or bury that, we think the dissenting opinion is valuable -– and we present it for your evaluation alongside select product reviews.

Almost two months ago we gave the HTC One max its 15 minutes of fame in our review of this behemoth. Not long after, we were given the opportunity to go hands on with the Sprint version of the phone, and along with it the chance to take a second look at the One max, and see how it stacks up now that it’s had a little time to mature.

As you might expect, from the outside the Sprint version isn’t significantly different than all the other versions of the One max on the market today. Luckily, it’s constructed just as well as you might expect, and Sprint didn’t “graffiti” their logo all over the place like some other carriers are known for doing. On the inside, Sprint made their mark, but we’ll get into that a little later.

Before we jump in, let me note a few items for the record. First off, I really don’t like HTC Sense. I’ve kept an eye on it since its early days on Windows Mobile, but other than its animated flip-clock, I haven’t had many nice things to say about it. Secondly, I love HTC. I’m saddened by the struggles the company has experienced recently and want nothing more than for HTC to succeed. Both are biases that I want to make sure you’re aware of — not so you’ll know the “slant” of this rebuttal, rather so you can know the full weight of how the HTC One max changed my long-held opinions.

Many people that you come into contact with have never seen a “phablet” before. They won’t know that there is some mystical hybrid between a smartphone and a tablet that many claim gives you the best of both worlds. Those people, when they see your One max, may simply think it’s an HTC One — until they pick it up.

Saying the One max is “big” is a grotesque understatement, and Michael Fisher’s application of the “behemoth” label is completely accurate. When someone picks up your One max for the first time they’ll be overwhelmed by its enormity. It’s bigger than you ever imagined a phone could be. Perhaps even bigger than a phone should be. Preconceptions aside, it is very much a phablet, and as such is entitled to its “mini-tablet” place in life. Once that initial reaction wears off, people seem to be right at home with the size and heft of the HTC One max.

Want to see something funny? Set Fingerprint scanning as your screen security method, then give your One max to a friend and have them try and unlock your phone. After swiping the screen in an attempt to unlock it they’ll eventually see the “Swipe finger to confirm” message, along with a box with a fingerprint it it. Every single person has put their finger in that box and pressed, with the animated blue arrows giving them the impression that the device is actually scanning their fingerprint. It’s comical because we all know how it’s supposed to work, but disappointing because HTC got fingerprint scanning so horribly wrong. Not only did HTC put the scanner in the wrong place and require you to swipe over (rather than press on) the reader, HTC also put it too close to the camera, ensuring that every picture you take will be blurry — thanks to a finger-smudge over the lens. 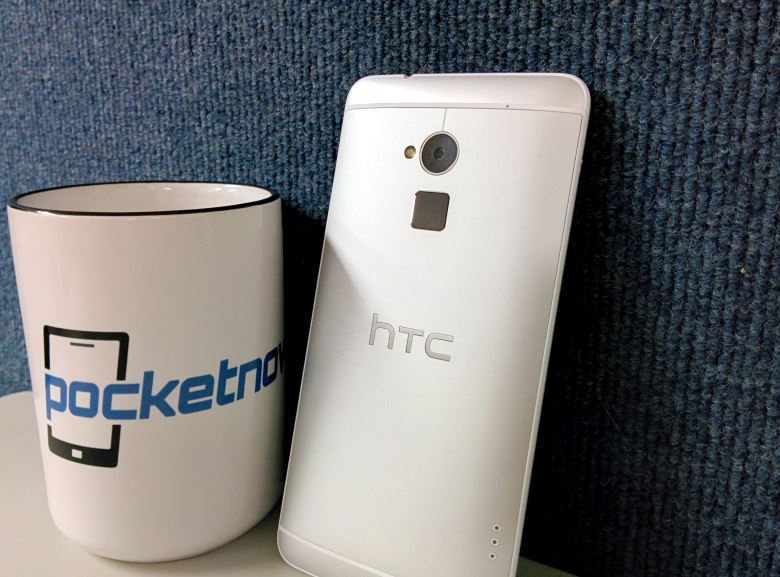 Bizarro-world fingerprint scanning aside, the HTC One max is a beautiful example of why I love HTC so much. Although not “light” by any stretch of the imagination, the One max doesn’t feel heavy, it isn’t slippery, and it doesn’t feel “cheap”. Every detail says “quality” and makes the phone feel wonderful in-hand — as long as your hands are big enough to hold it.

The front-firing speakers are huge and loud and glorious. If you watch video on your smartphone you’re going to love the experience the One max provides. The display is big and bright, the speakers are wonderful and pointed in the right direction. There’s only one problem…

The Sprint edition of the One max supports CDMA on 800 and 1900MHz, as well as LTE on 800, 1900, and 2600MHz. This new, tri-band LTE goes by the name of “Spark LTE” and can theoretically reach speeds of 60Mbps down. Notably missing is WiMax support. In any other phone on any other carrier this wouldn’t be a problem. The One max on Sprint, however, is crippled without it.

The speeds I typically got during my week with the Sprint One max weren’t terrible, they’re just weren’t particularly good. For a device with a big screen and such wonderful speakers, I was very excited to try out some streaming video. It was terrible. Sprint gambled on WiMax, then decided to switch over to the more popular technology (LTE) late in the game. What this means is that people who were enjoying 4G via WiMax are going to be stuck with 3G speeds until Spark LTE has been deployed to more locations. Spark LTE is very hard to find for most customers, and will cover less than 30% of Americans by the end of 2014.  Unless you’re under a WiFi bubble or are lucky enough to have Sprint LTE in your neck of the woods, your video watching experience is going to be less than ideal. 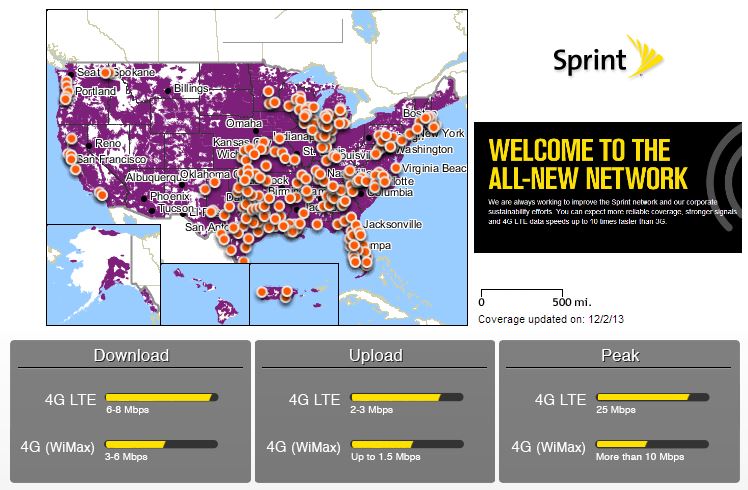 Oh, and if you think you’re being smart and want to pop the T-Mobile SIM out of your Nexus 5 and into your Sprint HTC One max just to see if it works, let me save you the trouble: it doesn’t. 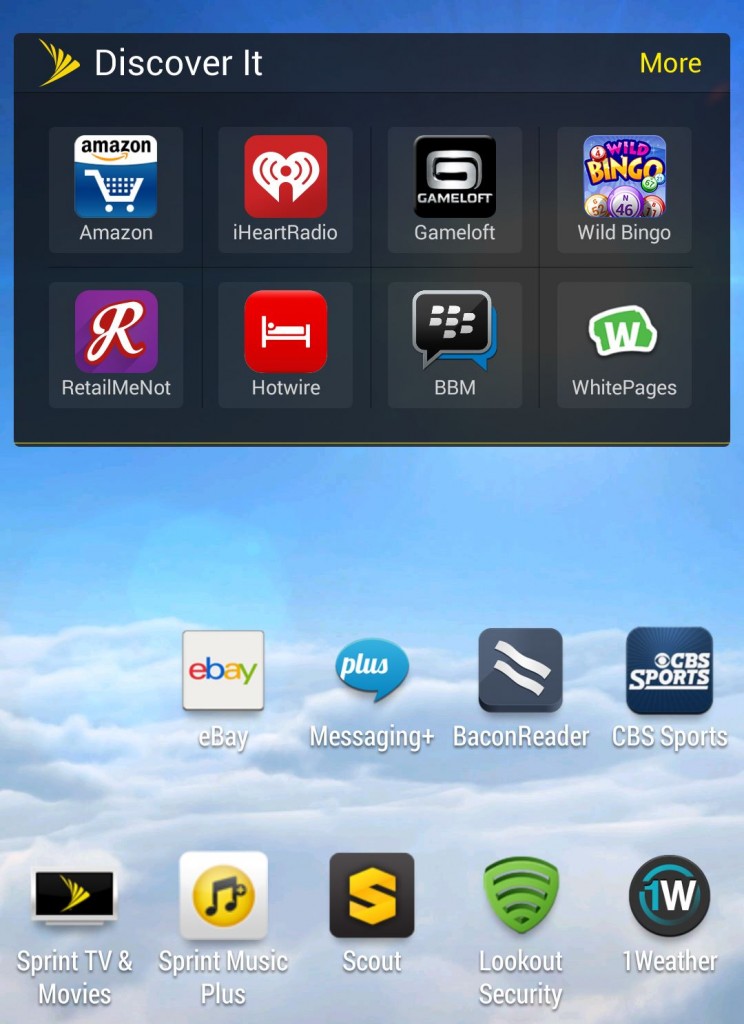 “Software” and “user experience” are often-times lumped into one. In this case I’m talking about the apps that come pre-loaded on the One Max rather than the version of Android or Sense. We’ll cover those as “user experience” later on.

Sprint is well known for filling up their devices with bloatware. A lot of bloatware. The One max is no different — or one would think by looking at it. Apps like CBS Sports, eBay, Lookout, Messaging+, NextRadio, Scout, Sprint Music Plus, Sprint TV & Movies, Sprint Zone, and more all come pre-loaded on the phone. Icons for the apps are pre-positioned on the home screen and in the app drawer, but tapping on many of them takes you to the Play Store instead of opening the app. Once the Play Store has been summoned you’ll be met with two options: Update or Uninstall. This gives me the impression that the apps themselves aren’t really loaded, just a shell that calls upon the Play Store to “update” the version on the device with the actual bits.

This is strange, to say the least, but at least users are given the opportunity to “uninstall” the app and hopefully liberate some storage space.

Unless you’re lucky enough to be covered by Sprint’s LTE, you may want to wait until you’re under a WiFi bubble before you start “updating” apps. This process took a very, very long time over 3G.

To sum up, we like the camera in the HTC One max, but it’s not going to win any awards. That said, if you’re just looking for a decent point-and-shoot, it will get the job done in most lighting conditions.

The bottom line when it comes down to rating any smartphone should be heavily weighted toward its user experience. All the components, hardware, software, operating system version, and apps, when working together comprise the totality of the experience. Any shortcoming along the way presents itself as the proverbial “weak link” and the whole thing falls apart. 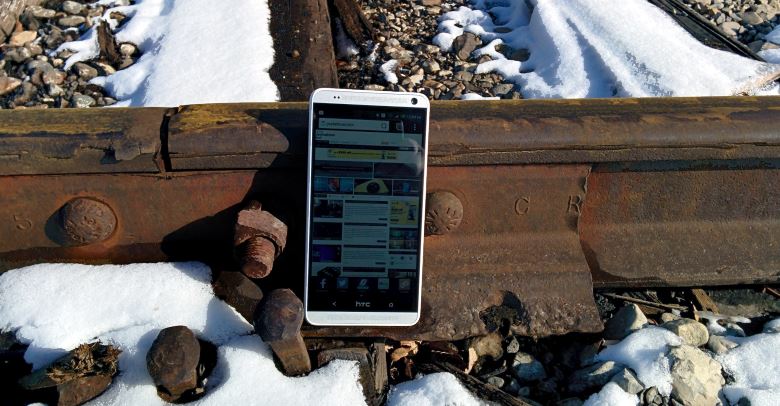 HTC picked the Snapdragon 600, with its four cores clocked at 1.7Ghz, which might seem underpowered by today’s standards. Other flagships have the Snapdragon 800 and are clocked above 2GHz, so the One max simply must be underpowered, right? Luckily, that’s not the case here. The One max powered through every task I could throw at it. Nothing seemed to hang or lag, and the overall experience was smooth.

HTC Sense, unlike older versions, isn’t “in your face” or distracting. It’s lightened up and now highlights Android rather than trying to force it to the background. Never once did I feel like I was being made to endure a cartoony, half-baked “skin” running on top of Android. Instead, Sense felt finished and as if it added to the experience instead of interfering with it. Even Blinkfeed now gives you the ability to turn it off — not that you’d want to, but you can.

If you want a phablet, and not just a “big phone”, you shouldn’t discount the HTC One max very quickly. It’s big. Very big. Perhaps too big for most people, but if that’s your thing, give the One max a try. Sure, its fingerprint reader is placed unfortunately. Yes, it’s hard to take a screenshot with the volume-down and power buttons so close to each other. But when considered as a whole, the only thing that should sway you away from the Sprint version of the HTC One max is Sprint’s relatively small LTE coverage at the time of this writing. If you’re within reach of Wi-Fi, or have never known LTE or WiMax, you won’t care, but if you’re going from a Sprint WiMax phone to the One max, you may want to stick with WiMax as long as you can — at least until Sprint LTE makes it to your neighborhood.

All in all, the Sprint version of the One max (and the One max in general) still ranks highly in my mind, and it should in yours as well.

I know you want even more Review Rebuttals, lucky for you Pocketnow’s got them! Check out Michael Fisher’s preceding installment where he lets us know his thoughts on the Galaxy S4 Zoom!