HTC One M8 for Windows first impressions: a needed boost for Big Red

HTC’s flagship smartphone just got a Microsoft makeover. Join us for our first impressions from our hands-on time with the HTC One M8 for Windows!

The HTC One M8 for Windows is official as of this morning, and we’re right this very minute getting some video coverage of the device for those of you who value sweaty, jittery hands-on phone footage above all else. But we also managed to snag a few minutes with the device formerly known as the HTC One W8 prior to this morning’s festivities, and we’ve prepared some first impressions for those who prefer the written word to the spoken one.

First the basics, in case you missed the official news post in this morning’s flurry of releases. The HTC One M8 for Windows is a carbon copy of the One M8 for Android, with one crucial difference: it runs Windows Phone 8.1.1, and it’s exclusive to Verizon Wireless. It’s available for order as of noon Eastern today straight from Verizon’s online storefront, and it competes directly with that carrier’s other Windows Phone high-ender, Nokia’s Lumia Icon. The One M8 for Windows sells for $99.99 on a two-year contract, or $29.99 per month on Verizon Edge.

After just a few minutes with the world’s newest Windows Phone flagship, here’s what we think so far. 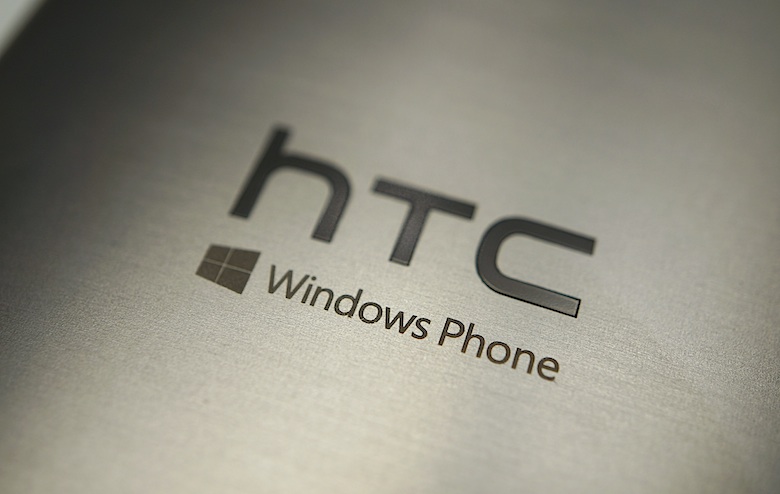 Okay, that subhead is misleading: from a hardware perspective, the HTC One M8 for Windows is 99% same, 1% different – and that’s only if you count the silkscreened decals. The way HTC put it to us, finished One M8 devices basically roll down the assembly line and are partitioned into two inventories: one for Android and one for Windows Phone. Then the latter batch is stamped with Microsoft and Verizon 4GLTE logos and sent to the Department of Cortana and Live Tiles to get all squared away.

While that’s probably not an accurate explanation of the actual manufacturing process inside HTC’s facilities, it might as well be. In the hand, the Microsoft-powered M8 is utterly indistinguishable from its Android counterpart, right down to the brush pattern on the gunmetal aluminum casing (gray being the only color this particular model is offered in). Everything from the BoomSound speakers to the Duo Camera to the 5-inch SLCD3 display is accounted for on the surface, and down below sits the familiar Snapdragon 801 processor backed up by the same 2GB of RAM. If you know the One M8, then you know the One W8 (which we still think could’ve been a really cool name, but we understand HTC’s desire to push the “One M8” brand instead). 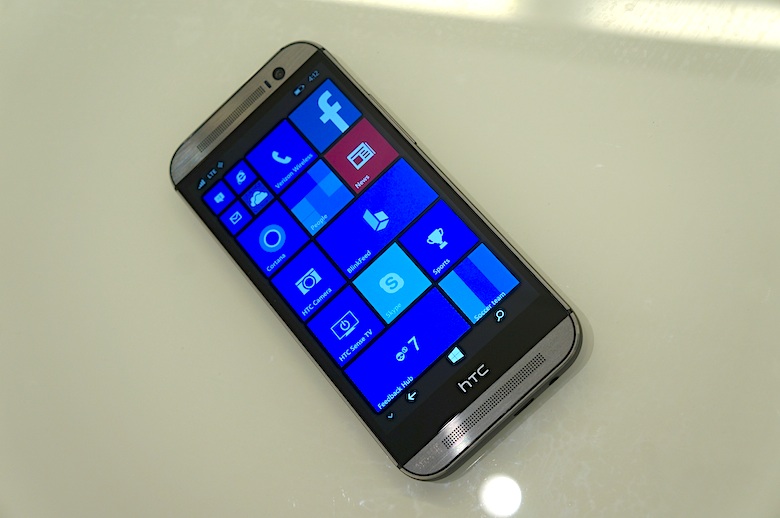 Shipping as it does with Windows Phone 8.1, HTC’s new offering includes all the goodies we outlined in our Windows Phone 8.1 Developer Preview review a few months back – and then some. Cortana is here in all her silky-toned holo-assistant glory, and other fundamental enhancements to Windows Phone like the Action Center, smaller home screen tiles, and global sharing support across apps are here as well. Also, the recent “platformization” of formerly integrated components like Messenger is complete in the full 8.1 release, for better or worse.

We still don’t like Microsoft’s decision to retire the hardware camera key requirement for the new Windows Phone, but we’ll admit it probably made the process of porting Redmond’s OS to the One M8 easier. Ditto for Windows Phone’s new software home row, which annoyingly takes up a few pixels’ worth of screen real estate. Fortunately, it’s hide-able with a quick tap of the tiny down arrow at lower left, and you can re-summon it with a simple upswipe.

Speaking of gestures: those annoyed with HTC’s insistence on placing power/standby keys atop very tall phones will be happy to know that double-tap-to-wake is here, and it works wonderfully.

Not just a Windows Phone – an HTC phone 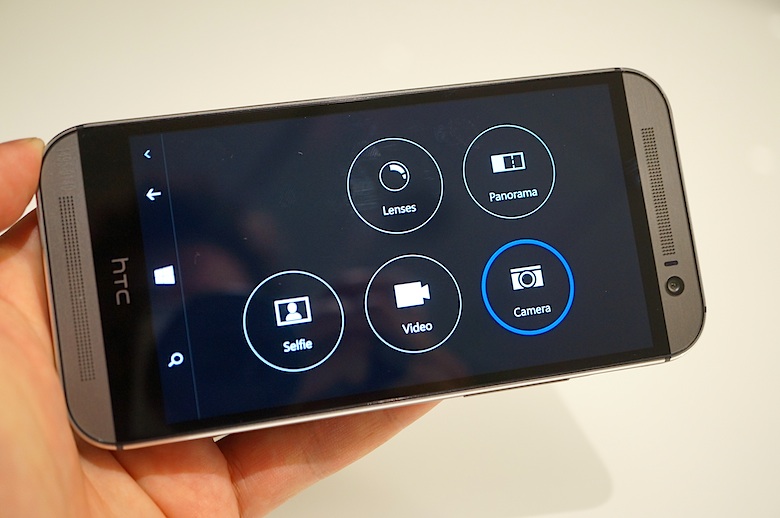 HTC didn’t just build an aluminum Cadillac for a bone-stock version of Microsoft’s OS, though. While both the HTC Hub and HTC’s special section of the Windows Store may have sailed off into retirement, this new One M8 comes out of the box with at least two compelling apps that help it stand apart from the competition.

The first is BlinkFeed, the social- and news-streaming app that first galled then enchanted users of the HTC One M7 last year. We’ve always thought BlinkFeed’s aesthetics strongly resemble Microsoft’s Modern design language anyway, but there’s a more important reason it’s included here. HTC’s data suggests a significantly lower return rate for devices on which customers have set up BlinkFeed, so it’s understandable that the company chose to bundle the app with its new halo Windows Phone. Rather than occupying the (still unused) left pane of the home screen, BlinkFeed on WP8.1 manifests as a Live Tile like any other news app, occasionally flashing headlines and other items of immediate interest.

The second, arguably more important software add-on is another HTC staple: a custom viewfinder for the camera. HTC worked with Microsoft to install the deep hooks necessary for this customized experience, which works almost exactly as it does on the Android M8. A few features have been sacrificed –Dual Capture is gone, as are some of the more elaborate Foregrounder effects– but elsewhere the shooting experience is a carbon copy of the earlier phone’s.

A compelling addition to a thin lineup 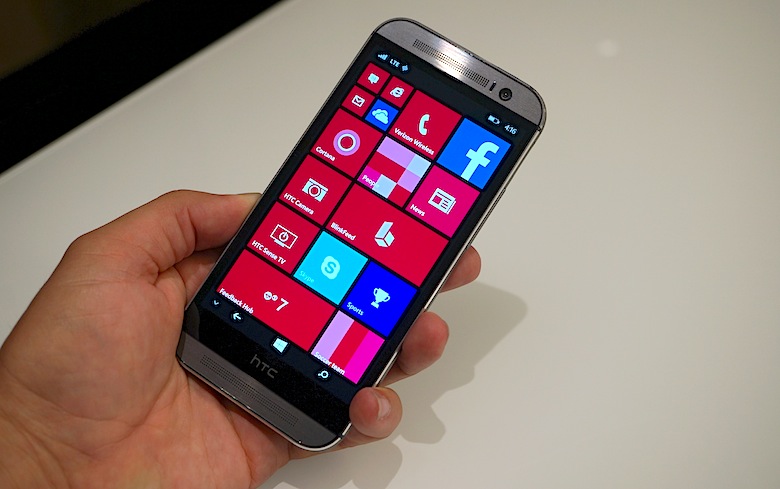 The Nokia Lumia Icon and Samsung ATIV SE are fine devices (I even nominated the former my choice for smartphone of the Spring), but as the lone representatives of the modern Windows Phone portfolio on America’s largest network, these two extremes don’t quite do the platform justice. The space between Nokia’s brick-like super-shooter and Samsung’s lightweight plastic handheld was crying out for something like HTC’s aluminum BoomSound finesse, and the One M8 for Windows may just be the perfect fit.

How it stacks up on the whole will of course depend on how it behaves in the hand, and we’ll know that only after our full review (where we’ll also explore how well hardware features like the IR blaster work with Microsoft’s platform). Stay tuned for that, but in the meantime, let us know what you think of the planet’s newest Windows Phone in the comments below!