Here’s what the HTC One E8 camera can do

Compared to the 4-UltraPixel oddity on its One M8 sibling, the HTC One E8 camera is a more traditional 13MP shooter. What does that mean? Come find out!

HTC built the One E8 as a companion device to its One M8 flagship, intending it as a more flamboyant, slightly cheaper version of the same. It’s a phone for markets where dual-SIM support matters, a phone for folks who prefer flashy polycarbonate over brushed aluminum … and most importantly for our purposes: it’s a smartphone that places resolution above creative design when it comes to its camera.

With its high-end One M8, HTC opted for an unconventional optical arrangement: a 4MP “UltraPixel” camera working in tandem with a dedicated depth-finding sensor to enable some faux bokeh effects which were (and remain) inferior to the competition. This, combined with the One M8’s low resolution and lack of optical stabilization, led to our calling the M8’s camera “just all right” in our full review, despite its excellent low-light performance. 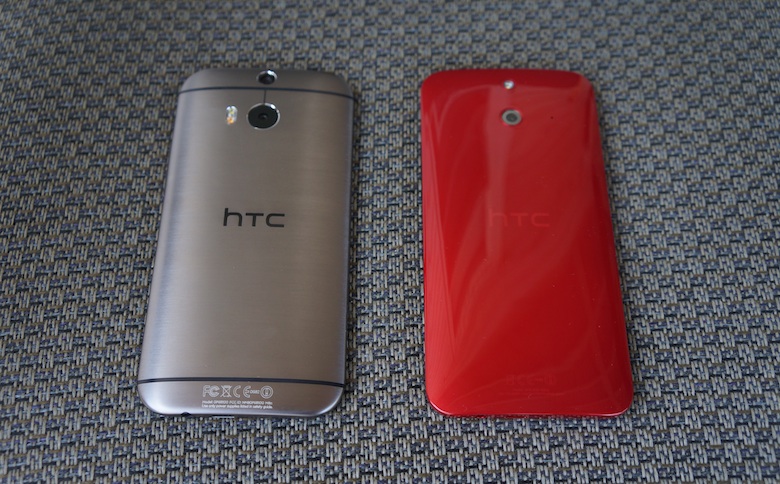 For those irritated with HTC’s compromise in the M8’s optics, the E8 must seem a breath of fresh air: its 13MP BSI sensor bears no fancy UltraPixel branding, the f/2.2 module also capable of 1080p video recording and HTC’s trademark Zoes. There’s no optical image stabilization, but also no depth sensor to muck up the phone’s looks: instead, a simple LED flash sits above the camera lens. It is, at least in part, the camera many people wanted the One M8 to have.

But this story is eerily similar to that of HTC’s One mini 2, the shrunken M8 we reviewed back in May. That device bore the same 13MP camera module as found in our One E8 here, and aroused much of the same hope in our comment sections of an HTC camera superior in performance to the UltraPixel shooter. Sadly, that didn’t prove to be the case.

So it’s with a degree of caution that we upload the results of a day’s worth of shooting with the One E8 camera, in both bright and dim environments. You’ll find our detailed impressions below, but first take a second to familiarize yourself with the One E8 itself in our quick first-impressions video.

With smartphone shooters cameras, outdoor scenes in good lighting generally make for much better photos. The more light, the easier it is to process the image and create a proper exposure. But with the HTC One E8, we’ve noticed that the red channel isn’t processed too well. Reds, as seen in the photo of the flowers and the photo of the wall mural below, tend to get oversaturated and completely blown out. Most of detail in the red color areas gets lost. If you change the angle to get some softer light as in the Charlie’s Kitchen photo, you’ll get more contrast in the red areas – but there’s still a noticeable loss of detail. 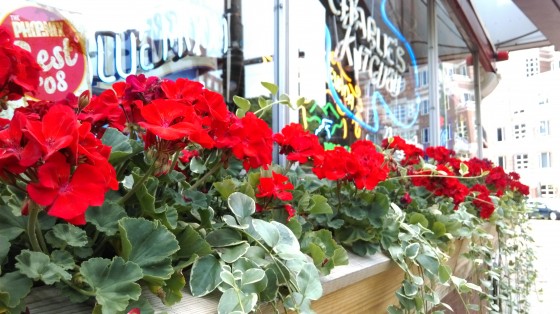 In the HDR samples of the clock tower images, you can see a bright halo around the shadow areas (the trees). This makes it obvious that HTC is using a filter that simply adjusts highlight and shadow areas with a blend between the edges as opposed to combining multiple photos for a real high dynamic range. This is something we’re used to seeing from HTC: the company’s Droid Incredible 4G LTE, tested in the same area two years ago, exhibits nearly identical “HDR” failings. 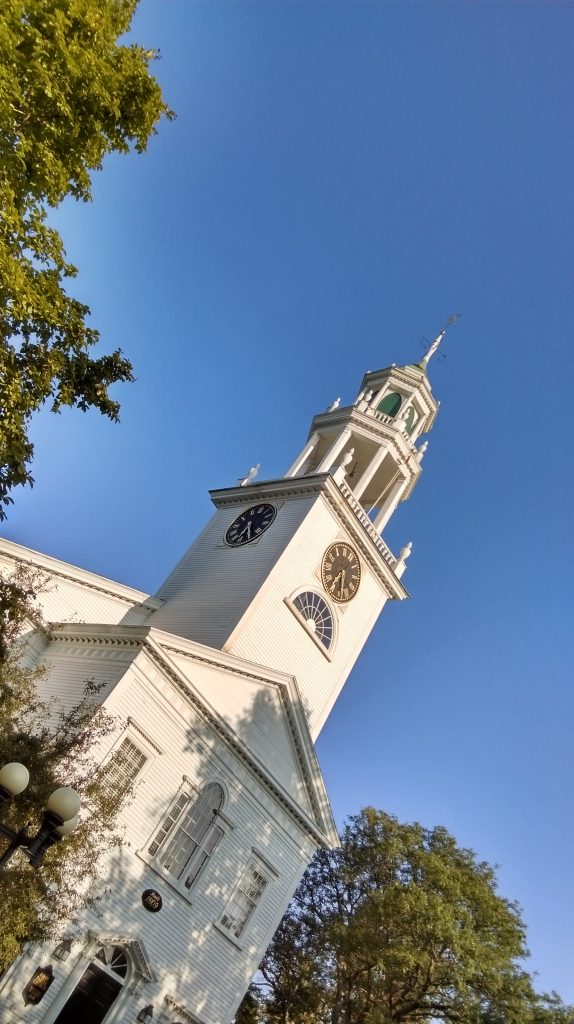 In terms of sharpness, the E8 does pretty well … as long as you only look at the center of the image. If you look at the photo of the golden statue, the textures look very crisp in the center of the frame, but towards the edges the sharpness falls off. We can probably attribute that to an inexpensive lens. You can also see a subtle bit of artificial sharpening, but it doesn’t seem as obvious as some of HTC’s other cameras.

With the wide f2.2 aperture, you can get some nice bokeh effects with a narrow depth of field (and all without a Duo Camera!). This is most noticeable in macro images like the bicycle lock. The blurred bokeh areas do reveal a bit of noise though, and even the high-contrast in-focus areas can get a little blotchy.

Low light photos are the real test of any camera, and the HTC One E8 naturally has trouble with these. You can see a significant increase in noise, blotchy areas, and a difficulty to render detail. While the center part of the lens is best for sharpness, you can see in the bar photo below that it doesn’t help much in dimly lit areas. The center area is still noisy and blotchy with washed out highlights and very little detail – a problem which plagues most of the low-light photos in the gallery below. The One M8 this is not.

Without optical stabilization, handheld video footage shot with the One E8 isn’t the smoothest: we continue to miss the OIS rig HTC built into the One M7, variations of which can be found on other Android and Windows Phone devices. The problem with blown-out highlights and inaccurate colors is just as evident on video as well, with a tendency toward the yellow-green side of the spectrum. On the bright side: nighttime video is noisy but pulls in more light than we expected, and audio capture seems solid.

HTC One E8: 1080p video sample from Pocketnow on Vimeo.

The up-sides: the bump in resolution is nice, it’s plenty capable of rendering beautiful shots in the right lighting (that photo of the peeling tree bark above sure is pretty), and HTC’s camera software remains among the most fun and useful with its Zoe Highlights feature. On the flip side, the One E8 camera’s middling performance in low-light and saturation/contrast problems in daylight make it pretty mediocre on the whole, and HTC’s characteristic super-sensitive exposure controls make using it more frustrating than it needs to be.

We’ll revisit the question of how well the One E8’s camera performs against the One M8’s in our head-to-head comparison coming later this week. For now, we’ll just say that (despite HTC’s excellent Gallery, special effects, and the ever-lovely Zoe feature) the One E8’s shooter wouldn’t be our first choice for a smartphone camera. Given our experience with the One mini 2 and Desire 816 cameras, that should come as no surprise. Megapixels continue to mean very little in the quest for smartphone camera clarity.