Learn what the new HTC One is doing to manipulate its performance, and why that’s being seen as HTC One benchmark cheating.

Tale as old as time, true as it can be, someone writes a benchmark, then someone goes and cheats.

Last year, a minor scandal swept over the smartphone industry, with the discovery that certain smartphones were going out of their way to score highly on benchmark tests. Basically, rather than naturally governing performance (CPU core speed and task distribution between cores) in a way that would reflect real-world operation, manufacturers were hard-coding their phones with lists of known benchmark apps, and triggering their handsets to dial-up performance artificially. It’s not that the scores didn’t show what these phones were technically capable of, but that this same performance wouldn’t be seen across non-benchmark apps. Some OEMs have made efforts to clean up their acts, but it looks like HTC couldn’t resist the temptation to game the system a little with the new One, as tests reveal benchmark manipulation.

What the new One is doing is a little more subtle than things we saw in the past: it’s not immediately going crazy with CPU performance when you first pull up a benchmark app, but as the benchmark runs, speeds are dialed-up much higher than they would be normally.

AnandTech verified this effect by running 3DMark both as its stock APK, and as a specially renamed version (but functionally identical) designed to avoid triggering the phone’s internal benchmark app whitelist. Sure enough, there’s a clear difference in CPU clock speed between the two.

There’s a setting for the new One tucked away in its developer settings that enables this full-tilt CPU mode to be permanently on, letting this same benchmark-dominating performance be enjoyed by all apps, and not just those on the whitelist. Does that ameliorate the problem? Well, it’s a step in the right direction, yes, but there’s still something deceitful about selectively engaging this mode, even when it hasn’t been deliberately activated, whenever specific benchmark apps are detected. 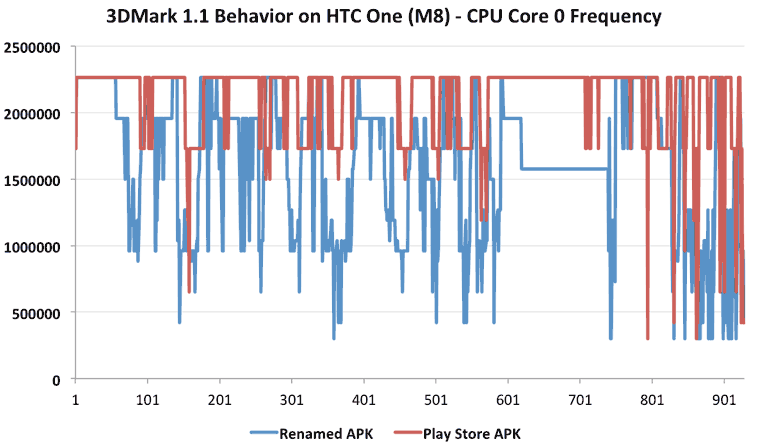