After initially hearing quite a lot about a certain upcoming HTC phone, codenamed Aero, said device is now being referred to as the HTC One A9. Said device will likely be announced later in the year, though some rumors have suggested dates that are already behind us. That didn’t stop the device from allegedly being pictured next to the iPhone 6.

The image you see below is allegedly a screenshot representing benchmark results of a certain HTC One A9. We advise you to remain skeptical about this, as there’s no way in verifying the veracity of the information below.

At the end of August there was some chatter indicating that the HTC One A9 might be powered by a deca-core (ten-core) SoC, specifically the MediaTek Helio X20. If you look closely at the image below, it seems to confirm the aforementioned information as the processor listed is the MT6797, which is indeed the ten-core Helio X20, identified as clocking at 1.96GHz.

In addition to that, there’s also 3864MB of RAM, which clearly testifies to the fact that, if this leak is legit, the HTC One A9 will pack 4GB of RAM.

No additional information is revealed, aside from single-core and multi-core benchmark scores, which we all know very well are not so relevant at this point. The device seems to be powered by Android 5.1.1 Lollipop and the test itself was allegedly conducted on September 8.

If this is indeed the upcoming HTC One A9, let us know of your thoughts on the specs leaked so far. Let’s not forget that, while some rumors talked about a Full HD screen, other reports are talking about a 5.5-inch WQHD display with a resolution of 2560×1440 pixels. 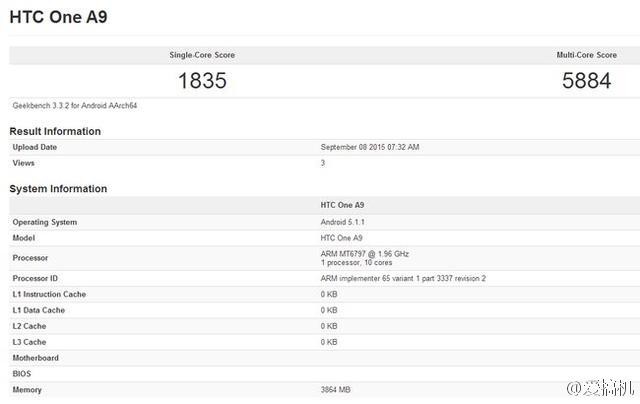 Source: GeekBench
Via: Juggly
Device image is a concept render

Google I/O 2021 May 18, and will go through May 20. More importantly, it will be free for everyone to attend virtually this year.

It could have a a standard wide angle camera, an ultrawide, and a telephoto (non-periscope) lens.