Is the new HTC M8 image fake? Hear why it might be, and check out a couple additional images, themselves rather suspect.

Overnight, we saw the arrival of an image claiming to reveal the HTC M8, showing off the weird dual-camera configuration previously mentioned in leaks and hinted at by way of case designs. But is this really the M8 we’re looking at? A couple new developments cross our desk this evening, with an HTC executive casting doubt on that earlier find, and a couple new pics surfacing – though ones that are already attracting some criticism themselves.

Mark Moons is HTC’s regional director for the Benelux area of Europe, and he took to Twitter this morning – just hours after that “M8” image surfaced – to post “somebody has been photo shopping….” He doesn’t go into more detail nor specifically address the M8 (though we suppose even acknowledging the model publicly would be risky in his position), but given the timing and the content of his message, it’s difficult to believe he’s talking about anything else.

We also get a couple additional “M8” pics, this time showing the phone’s front. The problem is, while this could be viewed as a black HTC One that’s had a larger screen Photoshopped in, the rumors we’ve heard of the M8 largely mirroring the One have us wondering if this could actually be how the phone might appear.

One curious aspect of this set is how the phones’ virtual buttons seem like they can disappear from the home screen. We suppose that could be a possible software feature, but we still have concerns that these might be fakes. Note, for instance, how the background image isn’t just covered-up by the Android buttons when they slide into place, but the entire picture scales to accommodate them – that would look quite odd to see happening in action. As such, treat these shots with an abundance of caution until we have something to back them up. 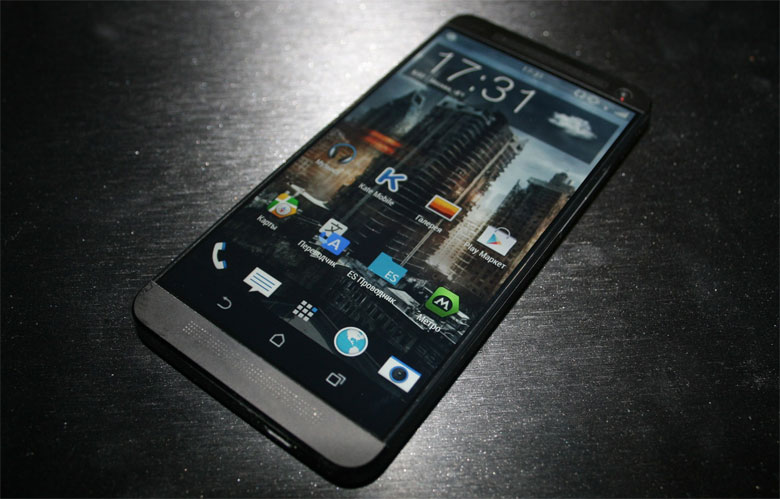