Last year Sprint and HTC introduced the first 4G smartphone available in the United States, the EVO 4G. Now Sprint and HTC have come up with another innovation, the EVO 3D, the first glasses-free 3D Android powered smartphone to land in the US. With its high resolution 3D screen and dual cameras the EVO 3D will surely wow anyone looking for a 3D experience. With all the hype surrounding 3D will the HTC EVO 3D be able to impress with this gimmick alone? Read on for our full review of the HTC EVO 3D to see if this is the next smartphone for you!

The EVO 3D includes everything essential to get up and running. The box comes with a USB wall charger, a microUSB charging/sync cable, an 8GB microSD Card, and a get started guide. Unfortunately there are a couple of items missing that would make the EVO 3D more usable such as a stereo headset and the MHL cable that will deliver HD content through the microUSB port.

The biggest selling feature is of course the glasses-free 3D display and even with the 3D turned off the screen is still impressive. The 4.3 inch qHD 960×540 LCD is behind a glass capacitive multi-touch digitizer. Giving life to the EVO 3D is a 1.2GHz dual-core Snapdragon processor that HTC has combined with a capacious 1GB of RAM. The internal ROM is 4GB and the auxiliary memory comes from the 8GB microSD card which is expandable up to 32GB. Combined to make the EVO 3D truly 3D is the dual 5MP cameras on the rear with dual LED flash, capturing 3D stills at 2MP resolution and 3D video at 720p HD. The front facing camera is able to snap still photos up to 1.3MP and record video at VGA resolution. The battery is a 1730mAh lithium-ion that Sprint states will provide up to 450 minutes of usage time.

As for wireless radios, you’ll find CDMA 800/1900 along with the ability to connect to Sprint’s WiMax 4G service, Wi-Fi b/g/n, Bluetooth 3.0, assisted GPS, and an FM radio. The sensors include a light, proximity, accelerometer, and a digital compass. Dual microphones provide noise cancellation for the stereo speakerphone. The EVO 3D also has a microUSB 2.0 port that doubles as MHL video out (720p HD), and also has a 3.5mm headset jack.

The EVO 3D has some of the best software available for any Android smartphone. Running Android 2.3 Gingerbread along with the latest version of HTC Sense 3.0, the EVO 3D delivers an impeccable user experience that any smartphone connoisseur will enjoy. While the EVO 3D does include a little bit of proprietary software the majority of it is quite useful. The best apps included are Media Share, Mirror, Reader, Sprint Hotspot, Qik, Transfer, and Watch. Some users may find the bundled apps appealing, while most would consider them obnoxious. The good thing about these less than desired apps is that a majority of them can be removed without rooting.

In terms of 3D apps, the EVO 3D has a limited selection of 3D games and movie titles. The device comes with a full version of Spiderman 3D and the movie The Green Hornet.

Here is where the EVO 3D stands out from any other smartphone available in the States. With its dual 5-megapixel cameras on the rear the EVO 3D captures lifelike 3D images and video. The photos are literally jaw-dropping, while showing the EVO 3D to a few associates, they were mesmerized when the pictures jumped out of the screen. Many had never seen a 3D movie in the theaters, which was quite surprising, and it was difficult to pry their hands from the EVO 3D.

The dual cameras certainly provide a unique experience that any snap-happy photographer will appreciate. The quality of the photos in 3D is adequate for any HD display around 2MP. Some may wonder why only capture at 2MP and the reason for this is that to view a 3D photo it must be viewed on either a 3D televisions or monitor that will usually max out at 1080p resolution (~2MP). So unless printer manufactures develop a way to print 3D photos anytime soon, 2MP is just enough.

For regular two-dimensional photos the EVO 3D is still moderately impressive. Capturing still photos at 5MP resolution is ample enough for sharing through social networks, email, and SMS. The photo quality is good and the device provides many settings in the software to customize shooting styles, layers, and effects. In low light situations the EVO 3D will employ its dual LED flash. The 1.3MP front-facing camera is good for both video chat and as a simple mirror.

The video quality of the EVO 3D is good at 720p HD. It would have been nice if HTC had bumped up that resolution to 1080p especially since this smartphone has more than enough power to handle it. Shooting a 3D video is a great experience as long as the scene doesn’t move much. The camera gets confused with reference points and how to render the 3D displaying slight glitches. For 2D video the EVO 3D records 720p candid scenes well. Video recording using the front facing camera is fair at a maxed VGA resolution.

The HTC EVO 3D and its 1.2GHz dual core processor is quite smooth and responsive. There was little lag experienced with the exception of loading a 3D games or movies, only a few seconds of delay though. The device is both fast and stable with sufficient benchmark speeds.

HTC and Sprint state that the EVO 3D should be able to provide around 450 minutes of usage and 355 hours of standby time. The actual usage time experienced was very similar to the projected estimate. The battery is a 1730mAh lithium-ion.

The audio quality of the ear speaker was clear with little distortion. Having the speaker on back of the phone made the speakerphone difficult to hear while using the EVO 3D, thankfully there are two microphones for noise cancellation to help eliminate background or highway racket. There were a couple of dropped calls in the Seattle metropolitan area, but other than that the calls were consistently good.

Sprint must have revamped their network in the area because while on 4G the EVO 3D was able to provide around 12Mbps download and 1.4Mbps upload. Testing other WiMax devices in the past only yielded around 5Mbps down and 1Mbps up. The 4G connections are still spotty and temperamental to repositioning or handling the phone (death grip perhaps). 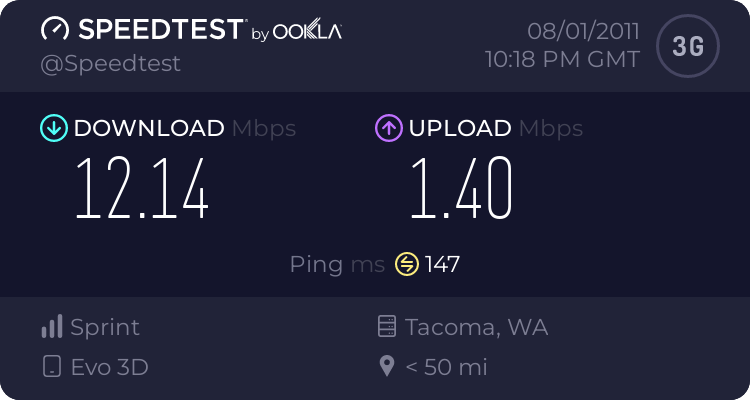 The HTC EVO 3D is available from Sprint for $199.99 after a qualifying two-year agreement and $100 mail-in rebate. The non-subsidized price has been set at $549.99 and will usually arrive within two to five business days.

+ Able to delete most trial software

– No headset or MHL cable included

Sprint has been ahead of the curve when it comes to bringing forth innovative smartphones over the past couple of years, and the HTC EVO 3D is no exception. Even if the device didn’t have the glasses-free 3D display, it would still be able to stand up to the competition.

Love it or hate it, 3D is here to stay and the HTC EVO 3D has set a precedence that other smartphone manufacturers should aspire too; great build quality, great software, and a great experience with 3D content creation and viewing.