AT&T’s got a ton of new phones arriving; learn about the start of HTC Desire Eye sales, as well as those for the Lumia 830, WP One M8, and more.

We just got finished telling you about AT&T’s plan to welcome Samsung’s Galaxy Note Edge into its stores on November 7, with sales beginning shortly thereafter, but that’s far from the only new entry into the carrier’s stable of device. In addition to that wrap-around phablet, this morning we catch wind of release announcements concerning an Android with a front-facer to die for, a couple Windows Phone models, and more.

First up is the HTC Desire Eye, the company’s new “selfie” phone that pairs a 13MP main camera with another 13MP shooter around front, complete with its own flash. It goes up for sale both online and in the carrier’s stores on November 7, where it will sell for about $150 on contract, or $550 full-price. AT&T is also getting the RE Camera at the same time, and it will knock $50 off the price if you also grab a Desire Eye at the same time.

Keeping in HTC territory, we’re about to see the One M8 for Windows end its carrier exclusivity and hop the fence over to AT&T. Sales begin November 7 for nearly $200 on contract, or $670 free-and-clear. 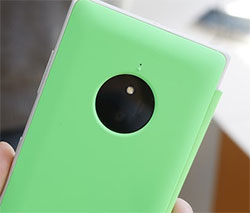 We’re keeping that WP ball rolling with the latest Lumia handset from Microsoft, as the Nokia Lumia 830 lands at AT&T on -you guessed it- November 7. The “affordable flagship” will sell for $100 on a two-year contract, or $450 outright. To help sweeten the deal, while supplies last the carrier is giving away a free Fitbit Flex to shoppers picking up the Lumia 830 – a $100 value itself.

Finally, we circle back around to Android for one more AT&T launch, with the Kyocera DuraForce hitting the network on November 7. This one’s got a 4.5-inch 720p display, 3100mAh battery, and runs a Snapdragon 400. It has a hardware button for push-to-talk, and is IP68-certified for dust- and waterproof operation. The DuraForce will sell for about $50 on contract, or $390 without.