See the invitation the company has been distributing for its HTC Butterfly S launch event.
Published 10 June 2013, 11:59 EDT

Last week, we fielded a rumor that HTC wasn’t quite done with its Butterfly line of Androids, and was planning to release a new Butterfly S as soon as sometime later this month. That’s already looking like it could be confirmed, as HTC has apparently begun distributing invitations to a Taiwan launch event scheduled for June 19, a week from Wednesday.

It’s nice to know that we’ll soon get the full story on this phone, because for the moment it’s really just one big mystery. At least, from what little we’ve heard about the hardware, it doesn’t sound all that different from the original Butterfly – same basic look, same five-inch 1080p display. Considering how its predecessor is many months old by the point, it might make sense to give the phone a new SoC, and we’re expecting an UltraPixel camera, but we’re hard-pressed to identify other changes that might be in store for this refresh.

We also don’t know if this model will lead to the release of another Droid DNA, though confirmation of the HTC One for Verizon has us doubting that there’s a need for such a model.

Alongside the Butterfly S, HTC also plans to share news of the Desire 600, but with that one already official, we’re only likely to get regional availability details. 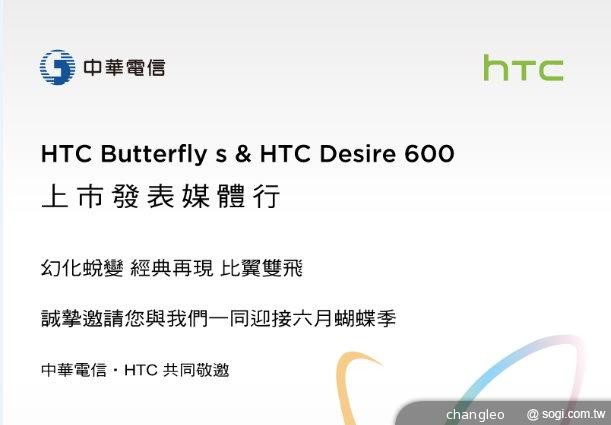