What happened to HTC’s advertising ambush?

Read why we expected so much more from HTC advertising this year, and how the company’s let itself down.
Published 30 May 2013, 07:05 EDT

Companies make mistakes. It’s part of doing business: if you want to win big, you might have to put yourself in a position where you’re open to failure. Smart companies keep their offerings diversified enough not to let one misstep send them spiraling out of control, and most importantly, learn from their mistakes. That’s absolutely vital, and lets companies approach new challenges without repeating past errors.

This issue seems be at the heart of what’s so infuriating about HTC and its approach to its smartphone business. As the One struggles to overcome the might of Samsung’s Galaxy S 4, and the First tries to just keep its head above water, HTC doesn’t look like it’s doing so much better than it had been a year ago. How did all this happen? After all, we’ve heard company executives talk about how they’re aware of where HTC has been weak in the past, and they really seemed committed to doing something about it.

Specifically, back in January CEO Peter Chou gave an interview with The Wall Street Journal where he singled-out advertising as one area where HTC really needed to place a strong new focus. Likely referencing Samsung and its sky-high marketing budget, Chou told the paper, “our competitors were too strong and very resourceful, pouring in lots of money into marketing. We haven’t done enough on the marketing front.” 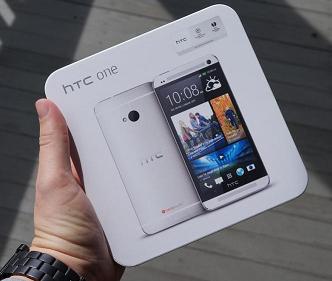 While Chou made it clear that HTC doesn’t have the funds to compete on a level playing field with Apple or Samsung, the sense we got from all of this was that HTC was aware that insufficient promotion was hurting its sales, and that it wanted to do something about it. After all, Chou talked about the company’s plans for “constantly fine-tuning our sales plans and position in various markets” and was optimistic for the future, insisting that “the worst for HTC has probably passed” and predicting “2013 will not be too bad.”

More recently, HTC Marketing Chief Benjamin Ho talked to the WSJ and continued this dialogue of awareness of past marketing failures and a desire to correct them. He talked about the need to be bolder, lamenting that “we haven’t been loud enough” in years past. With news that the company was retiring its “Quietly Brilliant” slogan, we were all ready for some grand reinvention of HTC’s marketing engine… and we’re still waiting.

So, where are all these HTC ads? The One sure seemed like it might get this revamped Samsung-style approach to promotion – heck, we first started feeling confident about the name One in the first place when we saw it pop up a little prematurely in signage at a football (the real kind) match. And since then, yes, HTC has been putting the phone’s name out there, but not even remotely in the sort of over-the-top marketing blast we were expecting.

Think about it: where do you see HTC advertisements? Maybe in a magazine? Online? Occasionally on TV? It still feels like HTC hasn’t learned a thing and is just going through its old paces for this year’s advertising efforts. It’s all very conventional, and not nearly engaging nor pervasive enough to help build-up consumer desire in the way HTC would like.

Contrast that with Samsung, king of the smartphone promotion game. Between old media, new media, TV, radio, and all, Samsung is practically shoving its smartphones down your throat. The Galaxy S 4 launch was so over-the-top that it came off as a bit silly at times, but there’s little denying how successful it was. Samsung even took the show outside, with dancers, billboards, and a Times Square simulcast. That public bit is key – while HTC had its own launch event for the press to see the One, Samsung made sure to put on a show for the smartphone-buying public. 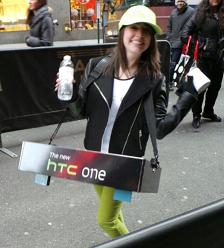 To its credit, HTC did crash Samsung’s party, sending a cadre of girls dressed in HTC lime and white to hand out snacks to those waiting to enter Samsung’s event. At the time, it seemed like a fun, cheeky way to remind us of the One, but we were kind of expecting HTC to follow that up with a heavy marketing blitz. In retrospect, it just fits a general pattern of doing things a little half-assed.

Like Peter Chou said, HTC doesn’t have the deepest pockets, but come on, guys: it is rapidly coming up on the point where it’s critical for you to stop coasting-by on auto-pilot. Take the risk and pour money – even if that means taking on new debt – to positively flood a phone you’re confident in, a phone like the One, with the marketing it needs in order to get the attention that will ultimately lead to sales. The crux of the matter is that for as much as we love the One, when compared to the Galaxy S 4 it’s practically unidentifiable by the public at large. If they don’t even recognize your phone, why are they going to want to buy it?

Don’t look at advertising as an expense. It’s an investment that, if done right, will come right back to you in sales many times over. Samsung’s not throwing all this money at promotion because it’s stupid – that cash drives sales, and it’s getting every penny back.

The year’s not over. You can salvage this. But you’re going to have to stop just talking a big game, and actually make this promotional push happen.

It seems that we won’t have to wait that long the new iPhone 12 series to arrive, as new rumors suggest that they will launch in October
YouTube 1.8M
Facebook 569K
Twitter 196K
Instagram 133K
RSS