HTC Volantis tablet rumored to get obscene amount of RAM

Will Volantis really be an HTC 5GB RAM tablet? Get the latest leaked details on its top-shelf hardware configuration.

For several months now, rumors have been growing persistent with claims that HTC is renewing its interest in tablets and that a new Android model is on its way. Last month we shared the latest talk about an HTC Nexus tablet, taking the codename Volantis, and its very unusual hardware. Unlike most every Android tablet out there, Volantis was said to employ a display taking a 4:3 aspect ratio, as Apple uses with its iPad models. But now we’ve got a new set of Volantis leaks to check out today, and in addition to refuting that 4:3 rumor, they make a few new wild claims of their own.

According to @evleaks, the 8.9-inch Volantis is under testing with a 1680 x 1050 display, but would ship with a 2560 x 1600 panel just like in recent Samsung tablets – and all of these are 16:10 widescreen layouts, not 4:3. The idea of a 64-bit NVIDIA Tegra K1 is repeated (though it’s being tested with a Snapdragon 810), but instead of the 2GB of RAM mentioned before, @evleaks indicates that Volantis could get a whopping 5GB. He’s quick to clarify that the figure isn’t necessarily final, but HTC even evaluating a tablet with that much RAM is pretty interesting.

Other uncertainty lies with whether the tablet would get a 5MP or 8MP main camera, but the presence of 64GB flash storage sounds more certain.

Then we have this image down below, supposedly a macro shot of the tablet’s “silver aluminum unibody.” It’s hard to say just what we’re seeing here, but those text strings the arrow point to mentioning Flounder and Android Silver are some high-test rumor fuel.

Update: Looks like @evleaks got duped, and none of this new info is to be trusted. 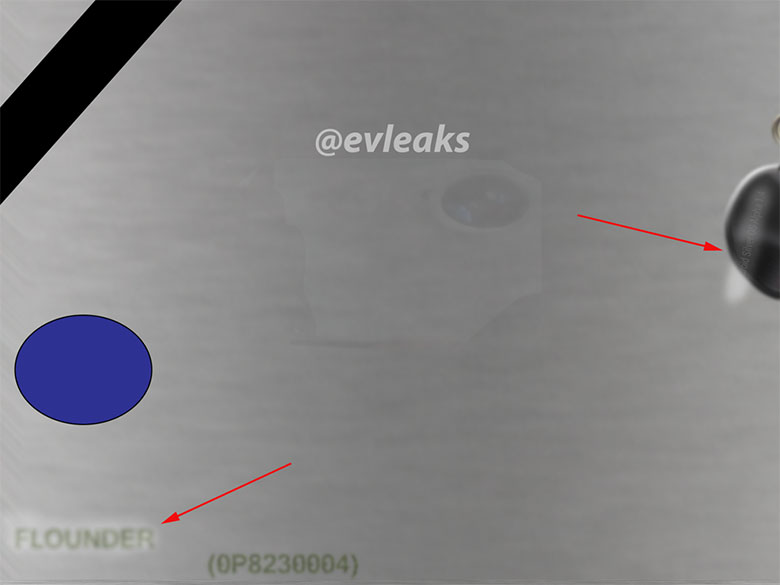