Android’s latest flagship smartphone goes official, as we get full details from the HTC 10 debut.

Every year, smartphone fans look forward to the spring season of new Android devices, with models landing from some of their favorite big-name manufacturers: Samsung, HTC, LG. Samsung led the pack with its Galaxy S7, and found LG making an early appearance alongside it with its own G5. That’s left HTC, and for weeks now we’ve been watching the rumors really heat up about its plans for its own 2016 flagship. A bumper crop of leaks this time around have managed to leave us with some pretty high expectations for HTC’s handset, from some new branding, to some boastful features, to a controversial shift in design. Today HTC finally steps up to show us what we’ve been waiting for, as it introduces the new HTC 10.

Just as we heard might happen, HTC’s dropping the One name from this year’s flagship, but the HTC 10 is still very much a model up to meeting the demands of a top-tier smartphone. That includes being powered by a Snapdragon 820 SoC *, featuring 4GB of RAM, and interacting with users through its 5.2-inch Super LCD 5 quad HD display.

HTC’s been teasing the HTC 10’s features with some pretty boastful ads, drawing particular attention to the phone’s camera setup. That includes a 12MP UltraPixel main camera (whose 1.55µm pixels sure seem to support rumors of an IMX377 sensor) with f/1.8 aperture and second-gen laser-assisted autofocus.

Around front, we find a 5MP wide-angle “UltraSelfie” camera, again with f/1.8 aperture. Maybe most impressively (and just as late-stage rumors predicted), HTC’s hooked both front and rear cameras up with their own optical image stabilization systems.

The manufacturer also puts an emphasis on audio performance with the HTC 10, separating tweeters and woofers for better frequency reproduction with the phone’s dual speakers (front face and bottom edge), and giving each a dedicated amp for clear sound.

Hi-res 24-bit audio support covers not just playback, but also recording, with the ability to capture stereo 24-bit sound alongside 4K video. Users will also find a powerful headphone amp, all ready to be connected to what HTC calls “the best Hi-Res audio certified inbox earphones yet,” a pair of earbuds with oversized drivers. 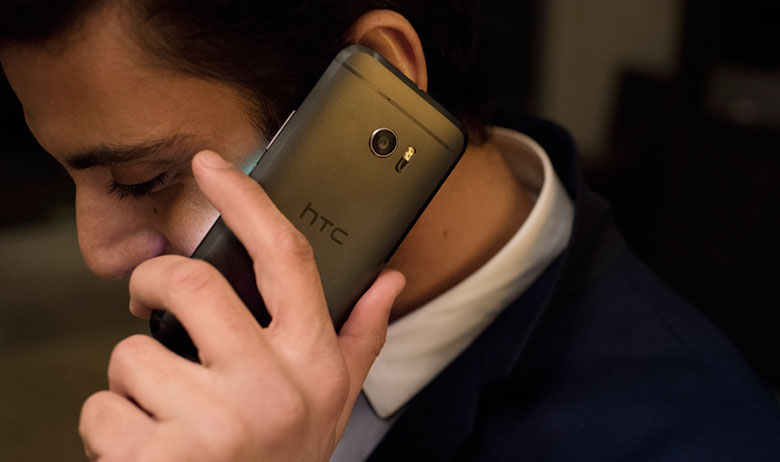 Other hardware features include a high-speed fingerprint sensor and 3000mAh battery with Quick Charge 3.0 Rapid Charger capable of giving the phone a half charge in just 30 minutes.

HTC will begin selling the HTC 10 later this month, with the phone available in Carbon Grey, Glacier Silver, and Topaz Gold finishes (not the four colors we once heard rumored). Availability will vary based on market, but here in the US pre-orders begin tomorrow, with shipments commencing in early May. All four major carriers have been confirmed (though not all will sell directly; AT&T, for instance, is only supported through HTC’s unlocked sales), which will announced their own pricing and dates independently. HTC itself will sell the handset unlocked, priced at just about $700.

* – HTC mentions that “the HTC 10 will come in two variants with different Qualcomm Snapdragon processors to cater for different market needs,” but so far hasn’t elaborated on that non-820 option: which chip it will feature instead, and where it will be sold. All we know is that most other phone hardware (including the cameras) should remain intact. (Update: it looks like HTC was talking about the Snapdragon 652-powered HTC 10 Lifestyle)

Today’s deals come from Amazon, and they include the latest Apple Watch Series 5, last year’s Samsung Galaxy S10+, and more