I’m a big fan of HP’s Z series of workstations and mobile workstations. These computers have lately been the go-to devices for high-end creativity and are backed by serious professional software companies like Adobe, Autodesk, Avid, etc.  Z series workstations are built for demanding industries such as media, entertainment, architecture, geospace, engineering, construction, life science, healthcare, and product development. In my work as a graphic designer and environmental designer, I’ve got an HP Z workstation tower on my desk attached to a Wacom Cintiq pen display and it’s awesome.

When it comes to the ZBooks, which are high-powered mobile workstations, I really liked the HP ZBook X2 (reviewed here).  The HP ZBook 14U G6 that’s we’ve got today is designed for a slightly different target market than the Zbook X2. It’s less of a mobile workstation for people creating 3D animations, architecture designs, or other visual pen-computing professional work, and it’s more of a mobile workstation meant for creative directors that need color accurate displays and the ability to open large design files in order to approve or review work that others have done. I’d say it would work well for other creative industries that don’t require a precision pen interface as well… I used it to design and develop a website as well as edit photos from studio shoots and do some video editing. So it’s certainly going to be useful for more than just creative directors. 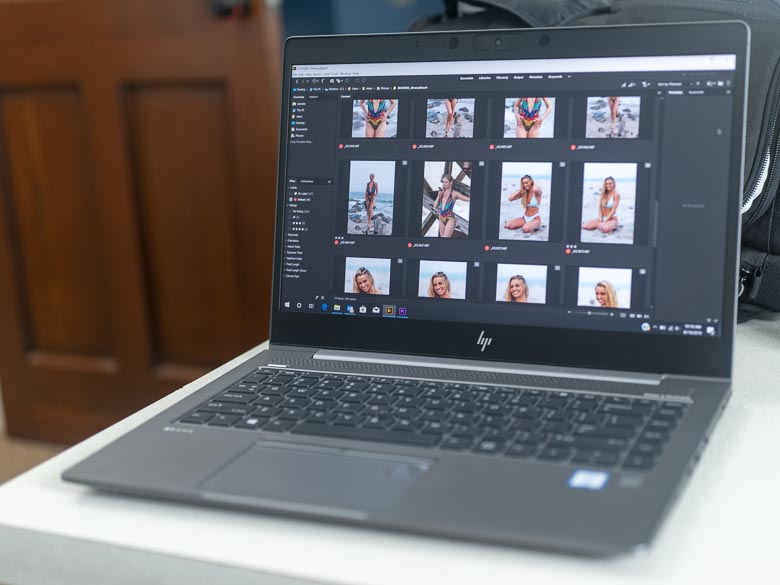 One of the big things I love about HP’s Zbook series of mobile workstations is the anti-glare matte screen. This is a must for creative work. I don’t understand how people can use those glossy mirror reflective screens that often come on other computers. 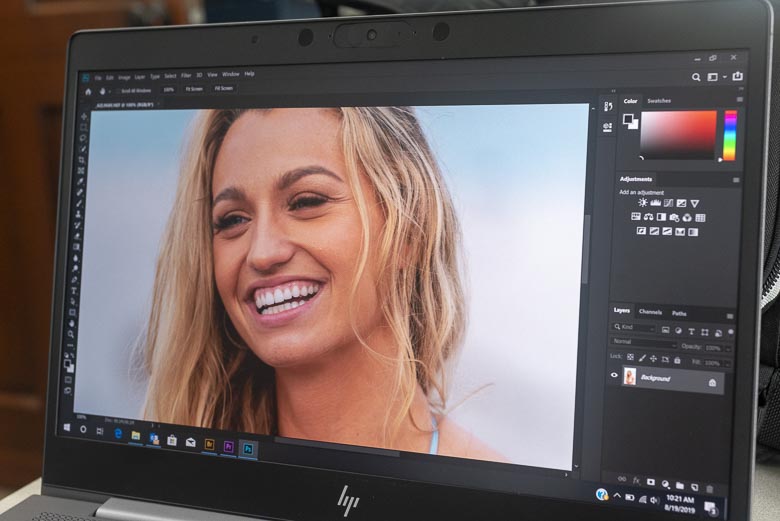 Another thing that’s awesome about the Zbook screens is the color accuracy and wide gamut.  Now, we’re not talking about what Apple calls “wide gamut” color, this is even better… this is 100% Adobe RGB color gamut so you can see the real color in photographs and designs.  The HP Zbook 14U does not have HP’s Dreamcolor display though. That one is a bit better, but the Zbook 14U still does have 100% Adobe RGB color gamut display, and it’s still pretty great. 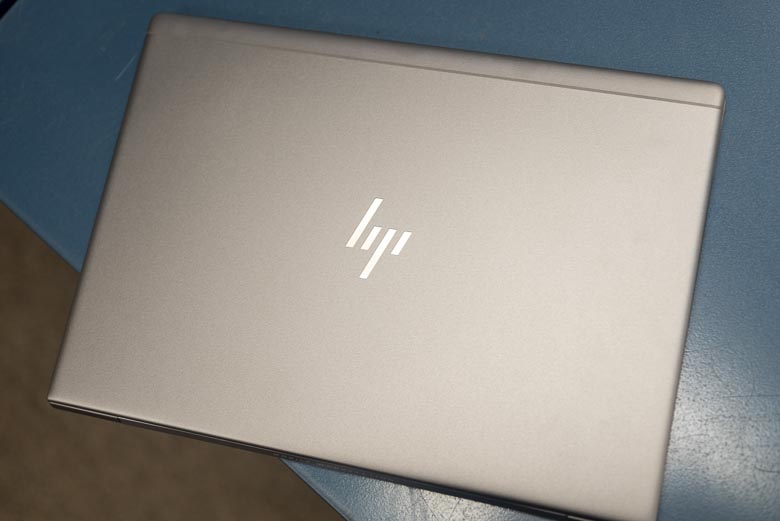 When closed, the HP Zbook 14U looks a lot like any other HP laptop. It’s got that nice embossed HP silver logo and grey metal finish. Personally, I kind of prefer the more unique look of the HP Zbook X2, but HP says that their customers for this type of laptop definitely prefer the more normal style look of it. 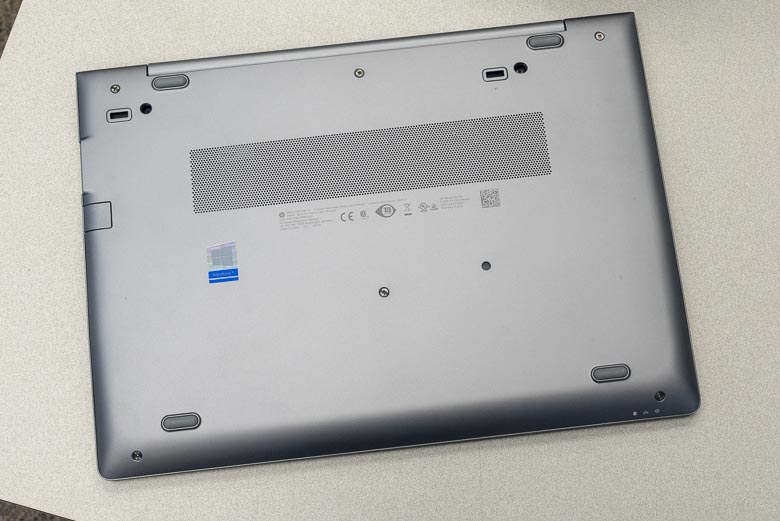 On the underside, we’ve got some ventilation holes, rubber feet, and a number of screws holding it all together. It should be pretty easy to undo those screws, open it up and upgrade the RAM, SSD storage, WLAN, and WWAN hardware if you want to. Unfortunately, the thing that will probably need replacing the soonest… the battery… is not user replacable. 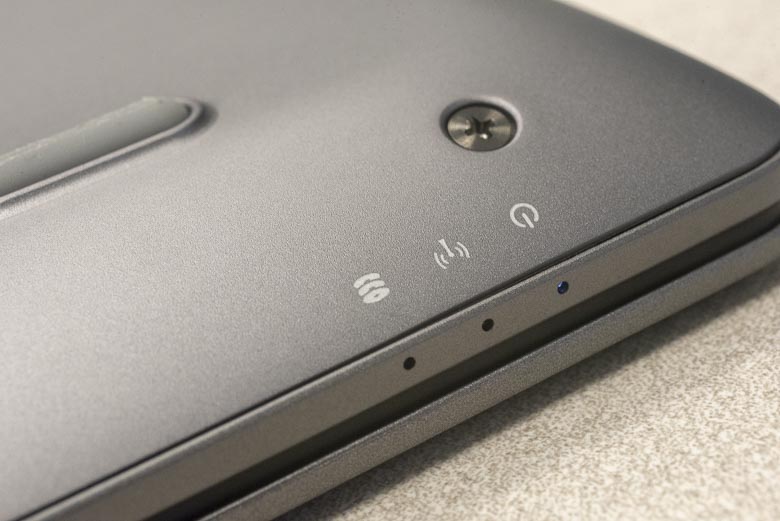 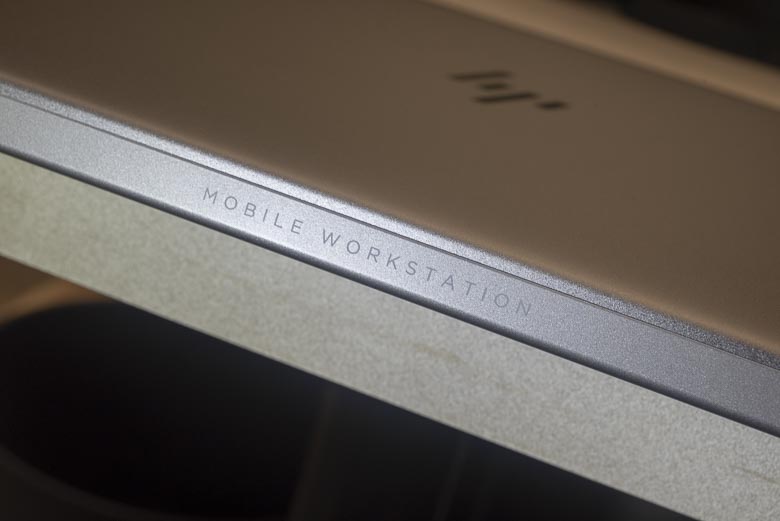 I like the subtle “Mobile Workstation” branding on the hinge edge.

The left edge has a cable lock port so you can keep it tethered to your desk. There’s also a fan ventilation grill, USB-A port and Smart Card reader for secure log-ins.

The right edge has a lot more in/out port options. 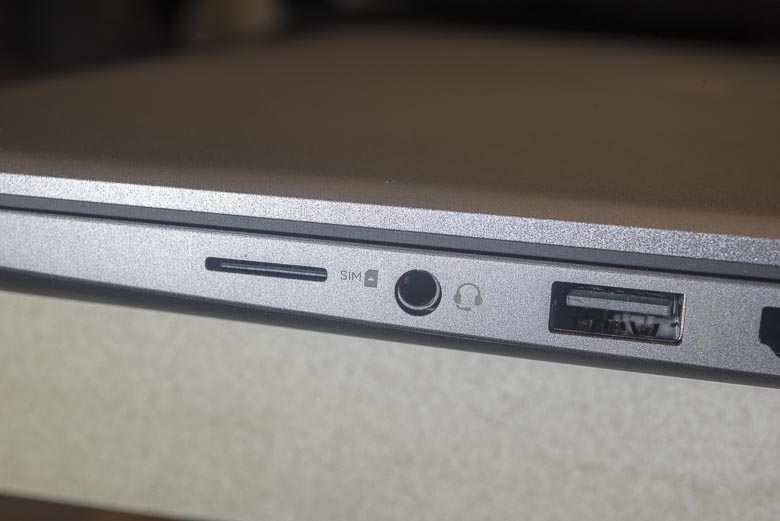 The first slot looks like it could be a MicroSD slot, but it isn’t… it’s a Nano SIM card slot, but it only works if you bought a version that includes the LTE modem radio. This version does not include an LTE radio, but the slot is still there, so you have to pay attention to that. Thankfully, there’s also a 3.5mm headset/microphone port and another USB-A port. 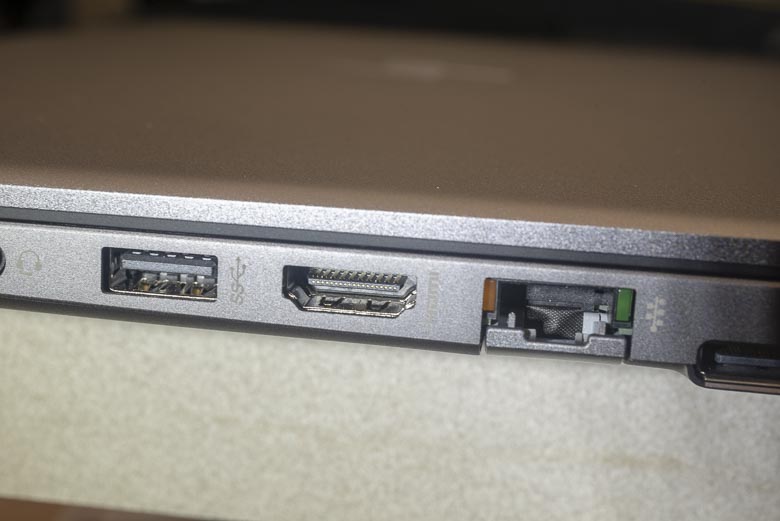 Besides that we’ve also got a full sized HDMI port for connecting monitors and projectors. Then there’s an ethernet port for hardwiring your network connection.  This one has a drop down drawer that you have to open up a little to fit an ethernet cable in.  It’s really great to have all of these I/O ports on a laptop since relying on only USB-C is often very problematic. 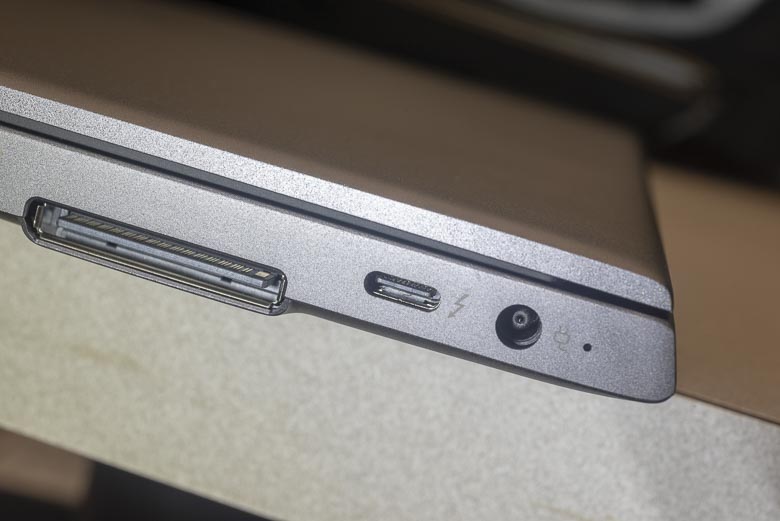 Next we’ve got a propietary HP docking station connection port along with a USB-C Thunderbolt port and a cylindrical power port.  You can use the USB-C port to charge & power the laptop too, but a cylindrical port is a lot smarter since there is no orientation required… it’s just point and plug. 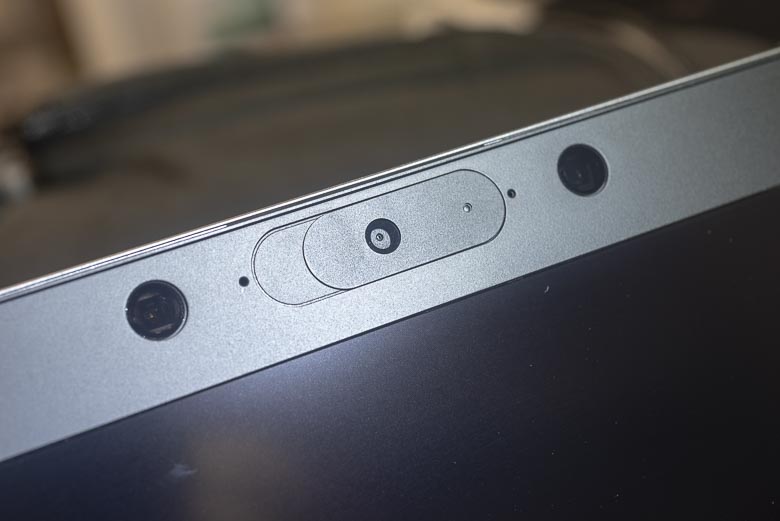 Under the lid you’ll find a front facing camera, microphone, and infrared biometric face recognition for Windows Hello secure log-ins. You’ll notice there’s a sliding shutter that you can use to cover up the camera if you want to be sure about visual hacking and privacy. 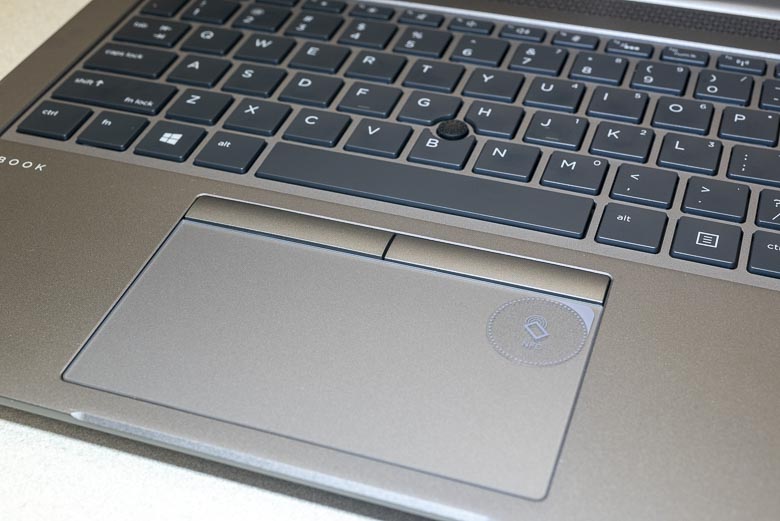 The keyboard is really great. The keys have a comfortable but quiet click to them and there’s plenty of key travel. They’re still flat like all the other keyboards as opposed to the more ergonomic and tactile convex key shapes we’ve seen in the past, but it’s still good. 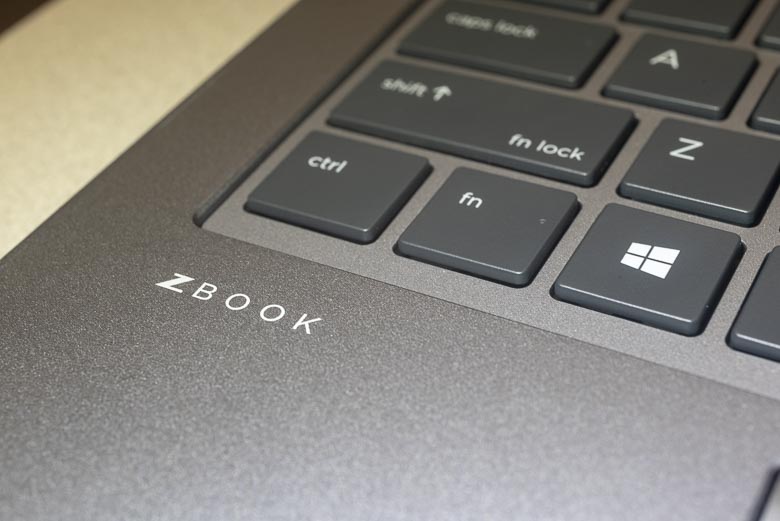 The little “Zbook” branding in the corner looks great too. 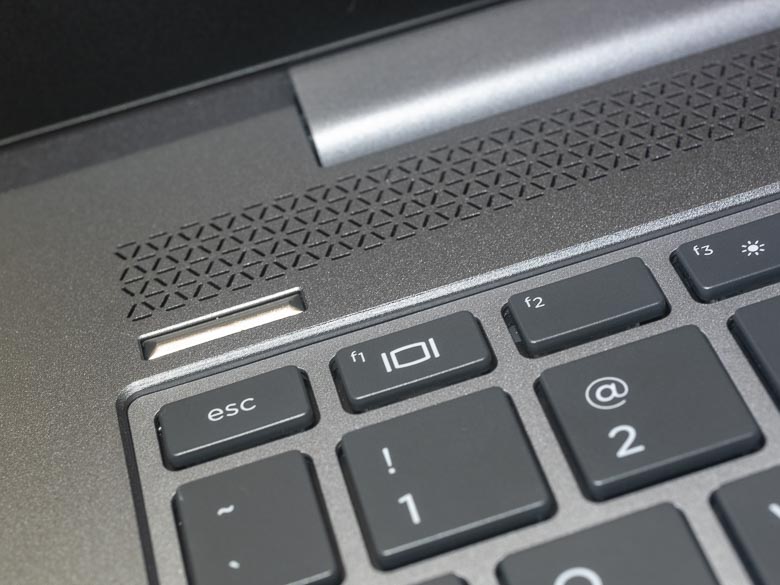 The power button is a very thin inset silver sliver just above the Esc key. It’s not easy to activate since it’s so thin, but maybe that’s a good thing. Still, I wish it was larger and had a fingerprint scanner built in. 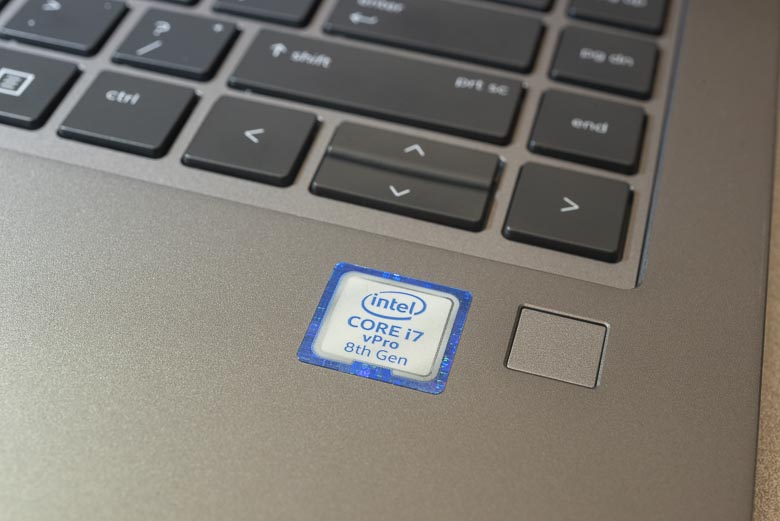 There is a fingerprint scanning square on the bottom right, but it doesn’t work on this model because this one does not include fingerprint scanning hardware.  The square is still there though, so again… you have to pay attention to which hardware aspects you actually get since the hardware case is the same for all of them. 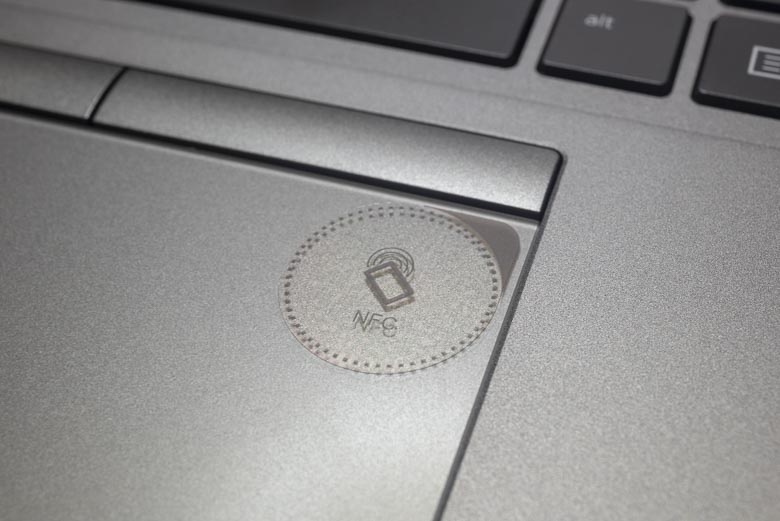 The trackpad is large enough and usable and even includes an NFC chip. The NFC chip is used for sending and recieving files so if you haven’t initiated that, tapping the NFC chip with an NFC device won’t do anything. You’ll also noticed some real left click and right click buttons above the trackpad. Those are meant to be used with the trackpoint joystick in the keyboard. 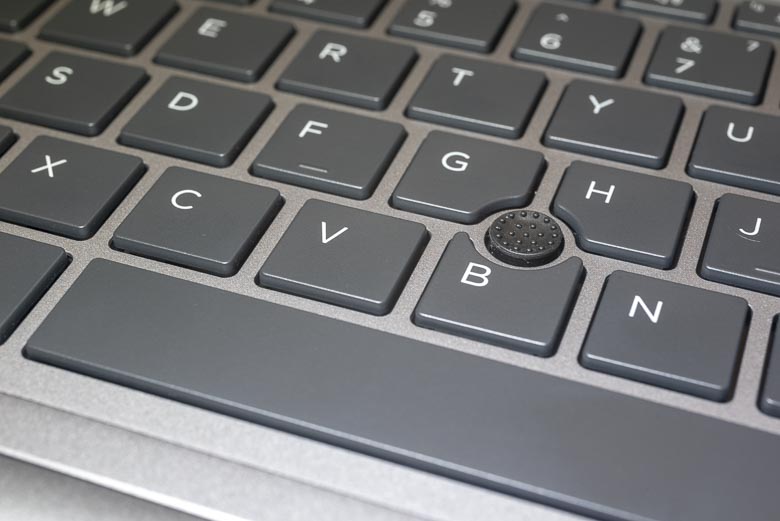 This little trackpoint joysticks between the G and H keys on the keyboard seem a little rare these days, but there are a lot of people who still swear by them. This pointer interface does have some real benefits too. For example, you don’t have to move your hand off of the keyboard in order to access it.  Touching and using the trackpoint joystick requires very little movement of one of your index fingers. Then using it to move the cursor around also requires very little finger movement.  The disadvantage is that it’s often less accurate, but if you’re concerned abou precision pointer control, you should be using a Wacom digitizer pen like what’s available on the HP Zbook X2 and ZBook Studio x360. 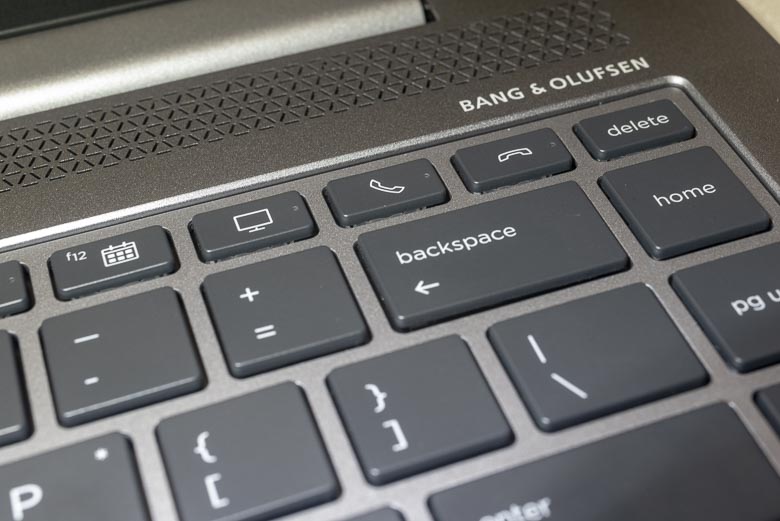 The keyboard also has some special keys for things like volume control, brightness, backlight, microphone mute, wireless networking, a calendar button, and even two phone answer & end keys which work with Skype for Business (which is used very often in big businesses). 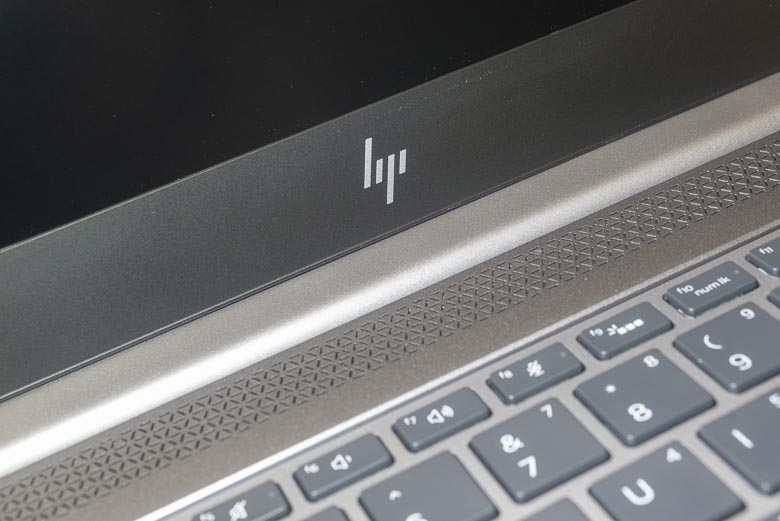 Above the keyboard is a grid of triangle shaped holes, and that’s where the Bang & Olufsen speakers are. These work very nicely, so if audio quality is important, this Zbook 14U has you covered. 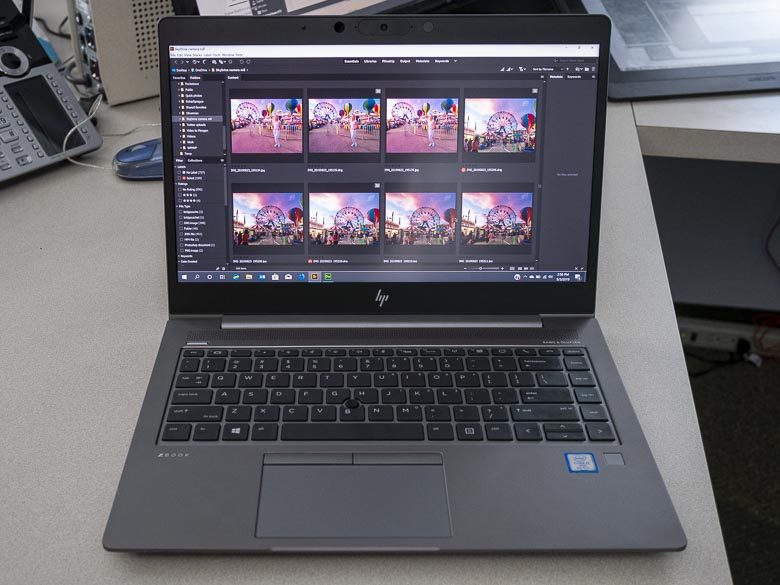 Besides the other great internal specs such as the Core i7 quad core processor and 32Gb of RAM, the AMD Radeon Pro WX3200 graphics processing unit makes handling high end creative programs a breeze.

Of course the HP Zbook 14U comes with Windows 10 pre-installed. It updated to version 1903 without any problems. It annoyingly still includes all of these Candy Crush crapware games even though this is supposed to be a serious mobile workstation.  Still, those are easy to uninstall.

You can choose to get it pre-installed with Windows 10 Pro 64, Windows 10 Home 64, or even FreeDOS 2.0 if you want to save $230 and run some legacy DOS business software.

On Windows 10, HP does include some other useful utilities though, most of which deal with increasing security. 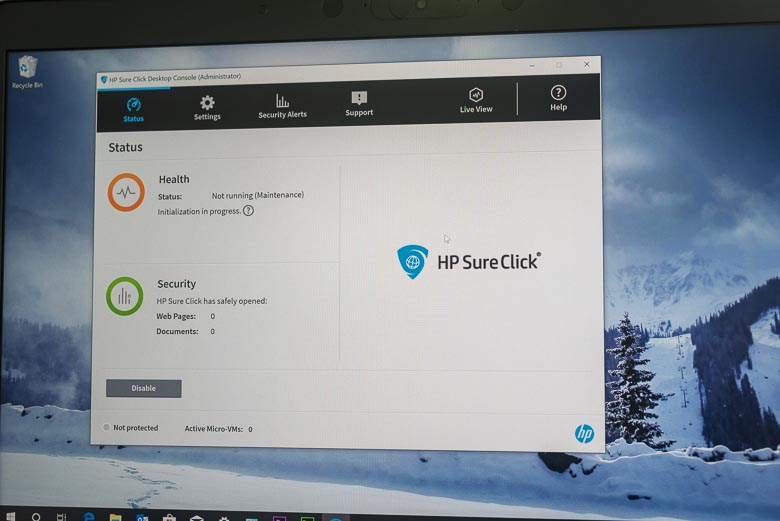 HP Sure Click is an anti-malware utility that isolates certain programs and browsers within their own virtual environment so that they can’t have any affect on other parts of the system. 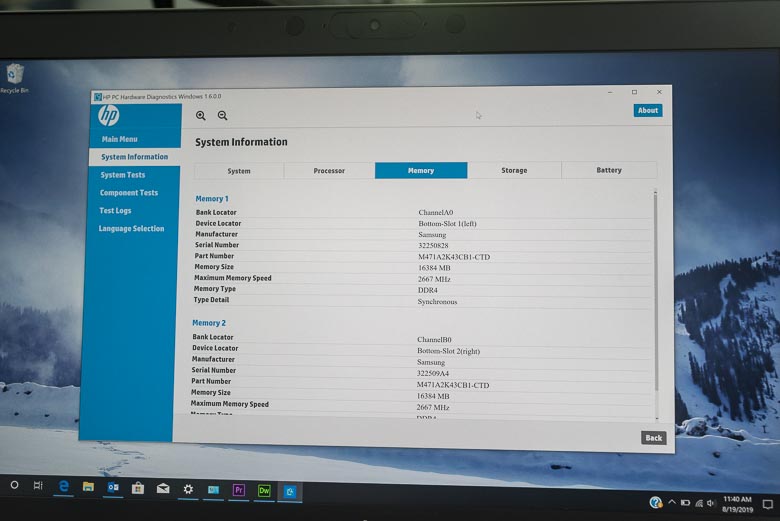 The HP PC Diagnostics utility let’s you see all of your system hardware information and also run some diagnostics tests to make sure everything is working properly. 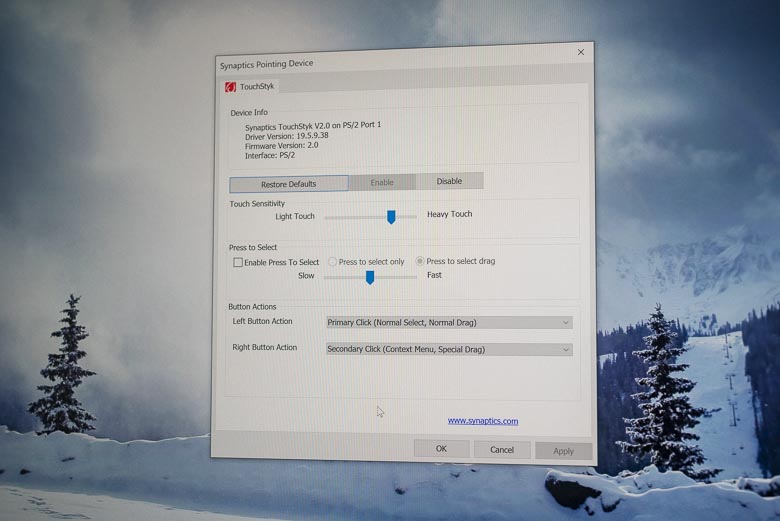 The trackpad and trackpoint “touch styk” include some customization software from Synaptics. Some of these options are pretty nice. For example, you can make tapping the trackpoint joystick act as a left-click instead of having to use the buttons below the spacebar. 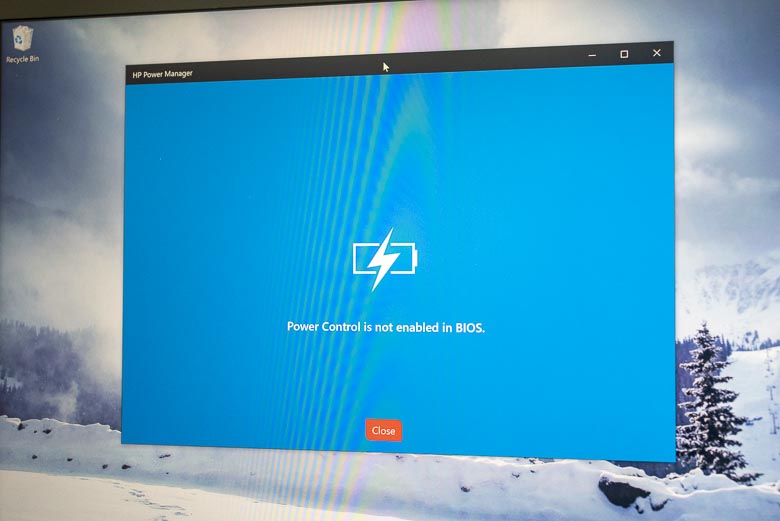 There’s also some HP Power management options, but apparently we need to enable this in the BIOS.  I’m not sure why it would ship without these controls being enabled already. 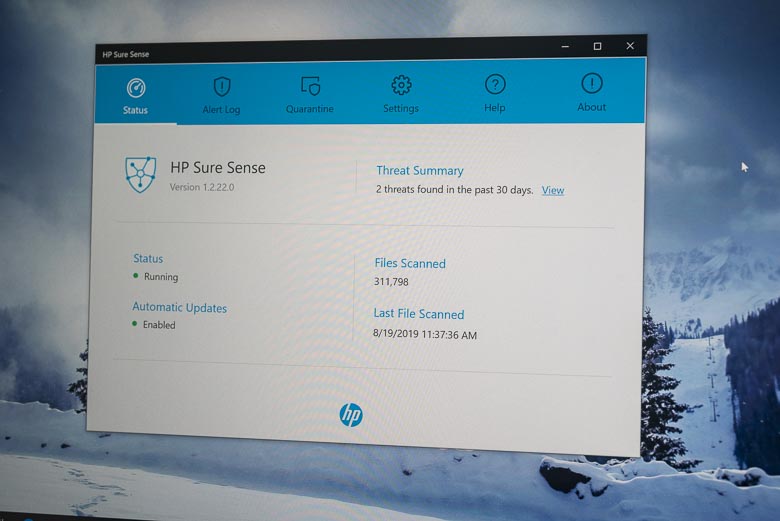 HP Sure Sense is an anti-virus program that’s included. This has some special “intelligent” features that are meant to detect malware and viruses based on the behavior of the system. For example, if large numbers of files suddenly start getting encrypted, that could be a ransomware attack, so HP Sure Sense is able to detect things like that and help prevent them. 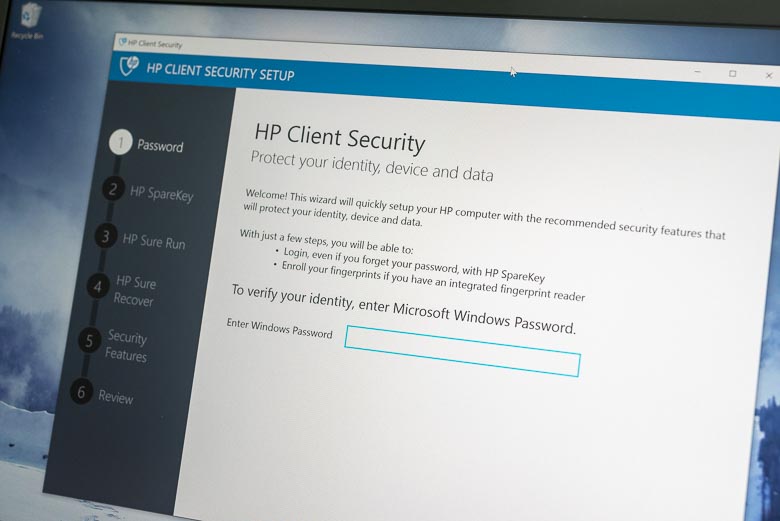 There’s also an HP Client Security setup that enables a number of other security features. HP also includes some “Sure Boot” software within the BIOS that can detect if the BIOS has been tampered with and let you restore a last known good “official” BIOS from HP.

Now, since this is a very powerful mobile workstation as opposed to some of HP’s other laptops… the Zbook 14U sacrifices a bit on battery life. You’re not going to get all day usage on this.  It should be fine for about 4 hours though.  Plus, the power brick is pretty small and portable… and it can recharge the Zbook 14U back to about 50% in only 30 minutes.  That means dropping it back into a docking station at your desk during lunch should get you through the rest of the day.

The HP Zbook 14u is available in a fairly large number of different configurations. Prices range from $1300 for a low-end model and go up into the $3000 range. You can customize the HP Zbook 14u on the HP store website in order to see the pricing for whichever configuration you’re interested in. 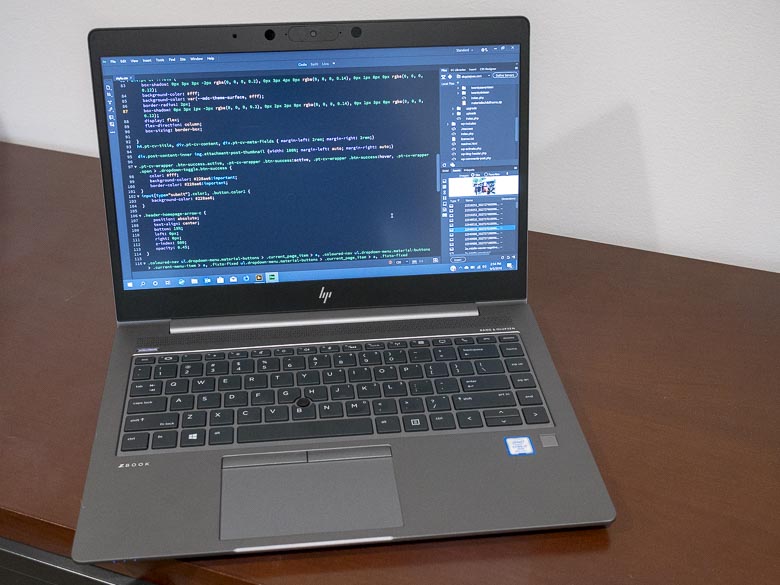 As mentioned in the beginning, I’m a big fan of the HP Z series of high-end workstations and the HP Zbook 14U is no exception. This laptop has a great balance of high-end processing power, lots of RAM, a great GPU, gorgeous screen, but all in a chassis that isn’t too thick and heavy. Yes, you can get more powerful mobile workstations, but they’re thicker and heavier. Yes, you can get thinner and lighter laptops, but they’re less powerful and capable. The ZBook 14U gives you some excellent high-end capabilities without breaking your back.

The new updated version of the crowd-developed Eve V tablet PC is almost ready! You can pre-order yours today.

In our HUAWEI FreeLace Pro review, we’re taking a look at all the features these wireless earbuds have to offer, and there’s a lot.

Black Friday is still giving us crazy deals, and we have selected some of the best monitors on sale for you to upgrade your workspace
YouTube 1.8M
Facebook 570K
Twitter 197K
Instagram 133K
RSS

We have leaked images of what seems to be a future Pixel smartphone, which appears to…