Why on earth is HP sticking with Windows 10 Mobile?

HP is pushing Windows 10 Mobile hardware out the door, despite the falling market share? So why is HP still pushing the OS? We examine within.

If there is one thing I respect, it’s standing up for the little guy. Heck, I’ve practically made a career out of it myself. And speaking of the little guy, I was quite the fan of webOS when it existed. As such, when Palm was about to go under, I was thankful when HP stepped in and seemingly saved Palm from that fate. Sure, I harbor just a bit of resentment from HP’s subsequent actions, but to be honest, we got many more good months out of Palm because of HP. What seems odd is that I’m here to write about much the same thing with HP and Windows 10 Mobile.

Don’t get me wrong; this certainly isn’t an apples to apples comparison. Microsoft isn’t going anywhere any time soon. Microsoft isn’t in trouble, though it’s likely losing market and mind share the further we go on. But HP standing up for Windows 10 Mobile is not a dissimilar situation. HP and Alcatel are basically the last major OEMs that are still producing Windows 10 Mobile hardware. But I want to focus on HP a little more here, because honestly, what’s with that?

In some ways, I rather admire HP for sticking to its guns. HP has been building Microsoft hardware for some time now. It seems only natural to continue that tradition into the phone arena. HP’s Android experiments haven’t gone well, so why not? HP realizes that the future of computing is in mobile, and it has had great success in the computing field.

And thank goodness HP is sticking with Windows 10 Mobile, because few other OEMs in the world are. Because of HP, we still have some decent offerings in the Windows 10 Mobile space. HP is touting its 3-in-1 Elite X3 and is even planning a sequel for the near future. It makes sense when you stop and think about it. A business PC company wants to get in on the business phone. There’s just something about Windows 10 Mobile that emotes business, even more than Android. Android is more like the everyday phone – you can use it for whatever. But a business-centric phone is what HP is after.

The thing is though, I’m not sure how much sense that makes. It’s not like Android can’t be used for business. Android would have the benefit of being attractive to consumers as well. Rather than relying on a business offering, I wonder if HP should be trying to make its mark on the Android space, which once you get past Samsung is ripe for the taking.

Other Android OEMs have failed to put the stranglehold on the second-place Android market. I’m not saying any OEM should shoot for second place, but when first place is Samsung, that’s a pretty high bar. Rather, I’m wondering if HP is brilliant or crazy for staying out of that mass of Android offerings, and sticking with a platform is can rule one its own. Further, is it worth ruling such a small percentage? I’m not sure I know the answer to that. 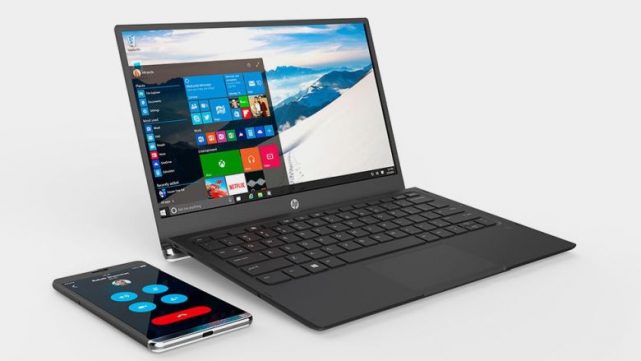 What I do know is that HP is really backing Microsoft and Windows 10 Mobile, which for the moment is helping keep Windows 10 Mobile afloat while Microsoft continues to develop the platform. When/if Surface phones come around, it may be a different story. But HP is betting on the business phone parts of Windows to be compelling to its larger enterprise customers, and it’s not a bad bet to make.

But I ultimately have to wonder if HP is going to be patient enough for the long run, and stick with Windows 10 Mobile until it regains its steam. Or is this another Palm project that will ultimately fail when millions of users fail to flock to the almighty HP sticker gracing the back of the phone? Time will tell, but for now, I sure hope HP knows what it’s doing.