Pressy comes with official support for some third-party channels. But how do you set it up? Learn how to use Pressy with Tasker and IFTTT in this guide.
Published 16 July 2014, 10:08 EDT

Last week, I reviewed Pressy, the button that hijacks the 3.5mm jack on your smartphone and turns it into a button which you can then use to launch apps, send SMS, place calls, and a few other simple tasks.

Frankly, I really like the little bugger. It’s not exactly the most practical accessory, it’s overpriced, and, yes, it takes up the headphone jack, meaning it could potentially become annoying for someone who listens to music often on their smartphone via wired headphones. I don’t. I have two sets of Bluetooth headphones and I typically stream music from my iPad or computer.

Still, out of the box, Pressy seemed somewhat … limited. The companion application only has a handful of functions built-in: place calls, send SMS, launch the camera, turn on the flashlight function, record audio or video, open an application, play or control media, and toggle a few settings. Most of this can be done with a few software alternatives to Pressy. In fact, just about anything a hardware button can do can be done using software. But that’s not the point of Pressy – it’s all about convenience, having some of your most important tasks tied to a button. 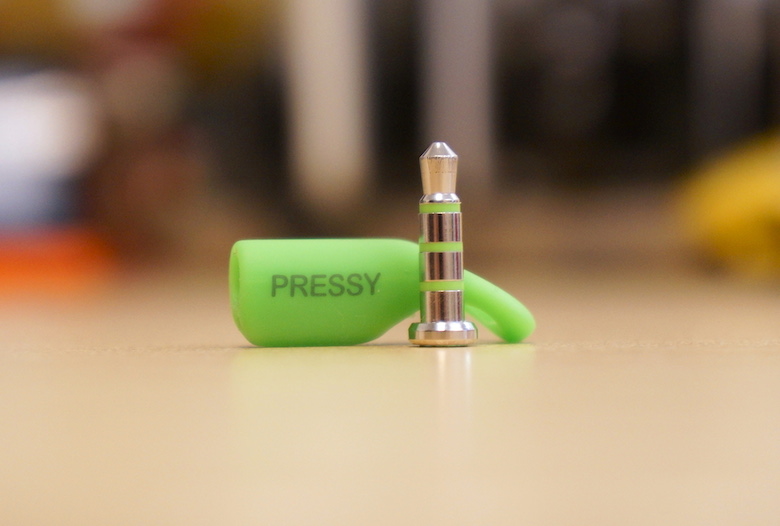 When I first got Pressy, I was impressed, but immediately started thinking of better ways to use the extra programmable button. Naturally, the first thing that came to my mind was IFTTT.

Tasker and AutomateIt support were listed on the Pressy Kickstarter page, both of which are very useful and will add a ton of utility to Pressy. I also, personally, wanted to automate some various online services, all with the press of a single button.

Between IFTTT and Tasker, Pressy could be open to a world of new functions. It could do just about anything you want it to – turn on the lights in your living room, send and email to your boss when you’re running late, or add entries to your calendar. So I set out to figure out this Tasker integration and a way to connect Pressy with IFTTT.

Turns out, it isn’t difficult to achieve at all. 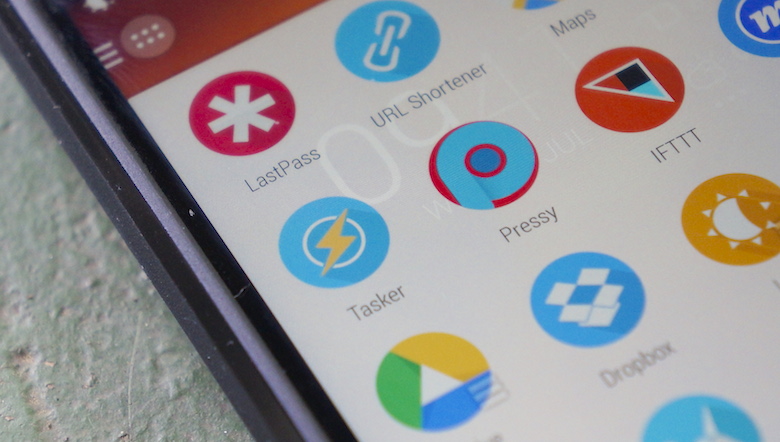 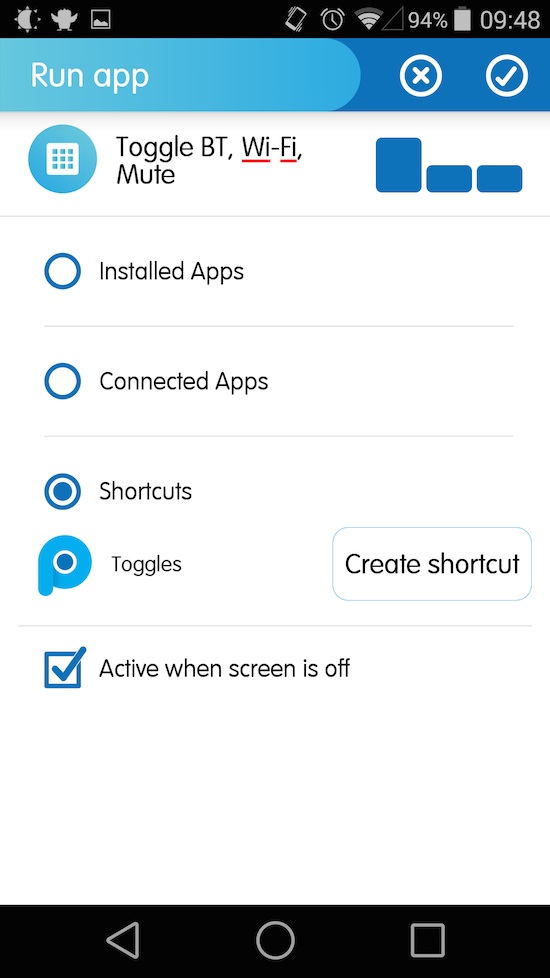 Tasker integration is built in, but even a few Google searches didn’t yield any explanations as to how to get Pressy to work with the automation app.

I imagined the integration would have to be on Tasker’s end – a plugin of sorts. Instead, all you have to do in Tasker is create your tasks per usual. To connect your Tasker tasks with Pressy, simply create a new action for Pressy. You will need to select the Run App function, but instead of selecting an application to run, you select Task Shortcut under the Shortcuts menu.

Why this is helpful is quite obvious. Out of the box, Pressy can only do one thing at a time. For example, press once to toggle Wi-Fi, twice to mute the ringer, and long-press to toggle Bluetooth. With Tasker, you can create a task that does all three of those things and that task to a single button press. This frees up the limited number of button combinations up for other tasks.

Tasker also comes with a lot more functionality than the default actions in the Pressy app. You can set alarms, toggle haptic feedback, or adjust the screen-off timeout, among many other things.

In other words, pairing Tasker with your new little hardware button is like pumping some steroids into it. But we already knew that, right? 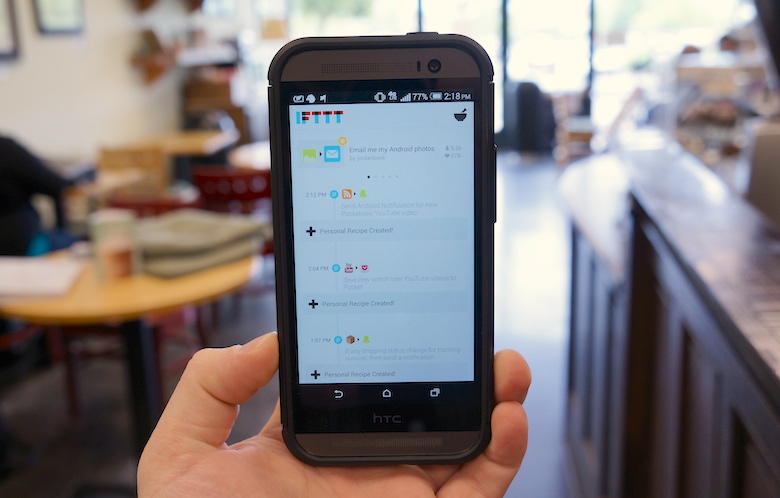 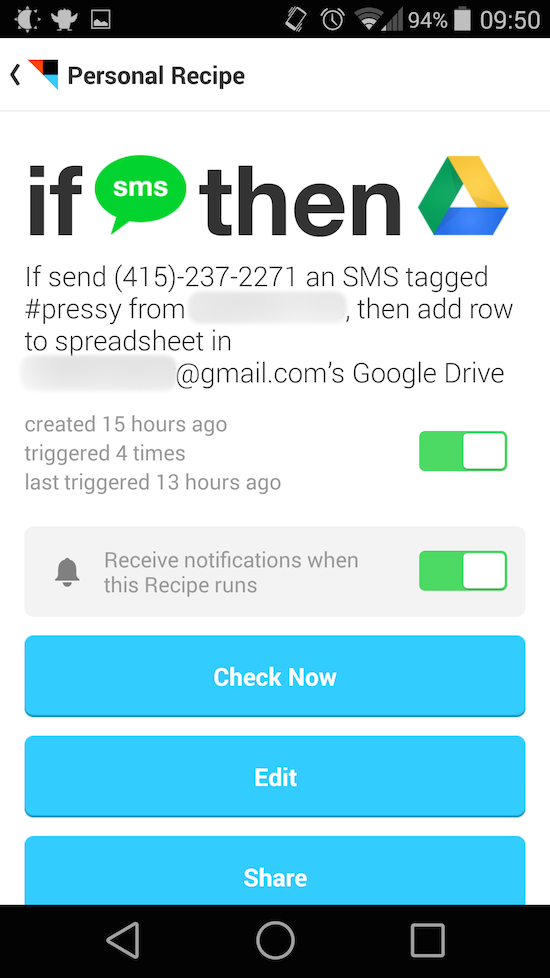 Frankly, I was more interested in getting Pressy working with IFTTT, mainly because it’s not officially supported, but also because IFTTT could extend the usefulness of Pressy beyond my phone.

With an official IFTTT Android app now available, I could see official Pressy support at some point. But until then, all you have to do to access some of your favorite web services through Pressy is to have it send a text message to IFTTT. You’ll need to register your mobile number through the SMS channel on IFTTT and through that same channel and select whatever Action Channel you want.

For instance, you could setup Pressy to send an SMS to IFTTT (using the given phone number) with a specific hashtag. That SMS could trigger your Nest thermostat, turn off your WeMo light switch, or add a quick event to your Google Calendar.

I setup Pressy with two different button combinations. One sends an SMS to IFTTT with the text “Start #pressy” and the other says, “End #pressy”. These messages are appended to a Google Drive spreadsheet titled Work Time Log with time codes. Now I can easily track the hours I work with Pressy.

I’m sure some of you have found other uses for Pressy. Like I mentioned before, AutomateIt is officially supported, but it needs no explanation as the app simply comes with a plugin download from Google Play to integrate with Pressy.

What uses have you found for Pressy, though? Have you integrated and created a genius recipe in IFTTT? Or do you have Pressy taking over your phone with Tasker? Share your uses for Pressy in the comments below!