The Best Way to Sync Windows Phone 8; Not What You’d Expect

Learn about another way to sync media with Windows Phone 8 that’s much more powerful than the newer sync clients from Microsoft.
Published 05 November 2012, 08:55 EST

If you saw our full Windows Phone 8 review, you may have noticed the part about the new Windows Phone 8 sync utilities.  Windows Phone no longer uses Zune for syncing media and the new sync programs are probably the most pathetic mobile device syncing utilities that Microsoft has ever made.  They don’t even sync content, they just transfer it.  There’s no conversion options for saving mobile storage space, there’s not automatic playlist sync or automatic anything.  You can’t sort individual songs by anything useful like “date added” or genre or DRM protected status.  You can’t set specific playlists to sync automatically as they’re changed nor can you even create playlists that automatically alter their content as your media library changes.  It’s a huge downgrade.  What’s worse is the desktop Windows Phone 8 app doesn’t cache your library, so every time you launch it, it has to re-scan your entire library for 15 minutes or so before you can do anything.

Anyway, there is a better way, and I’m not referring to using the file explorer with the new Mass Storage Device protocol that’s come to Windows Phone 8.  With that you still have to manually search through your media file folders and drag/drop each thing individually onto your device.  Ain’t nobody got time fo’ that!

So what’s a Windows Phone 8 user to do?  Look no further than 2009’s Windows Media Player!  That’s right, the old stalwart for auto-syncing music and videos to ancient Windows Mobile devices between 2003-2009 works beautifully with Windows Phone 8.  You still won’t have WiFi syncing, but at least you’ll have actual syncing options, media compression, and a decent media management application.

Here’s what you do:

Start Windows Media Player and go to the Sync tab.  From the menu, choose “Set up Sync”.  You’ll get to choose a name for the device and go through some set up options to create a partnership. 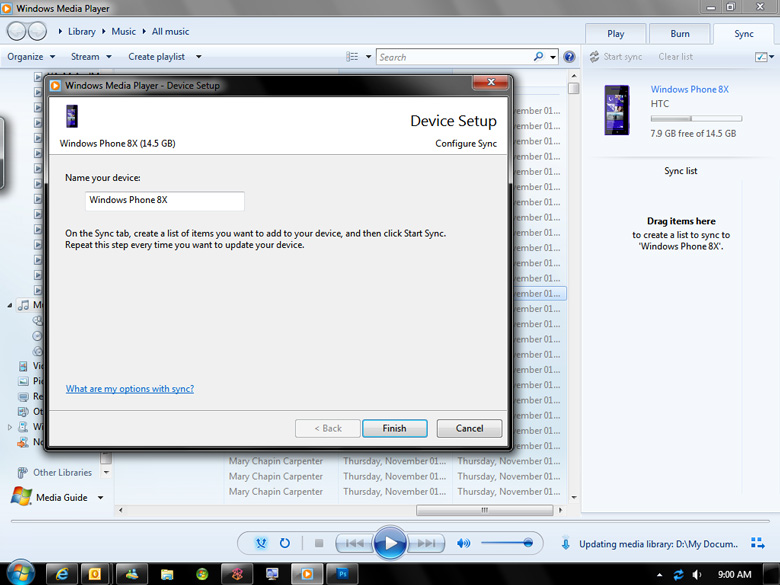 Next you’ll want to set up sync compression and downsampling options so that you’ll be able to fit more media on your limited storage areas.  Go to Organize > Options > Devices, then select the Windows Phone 8 and choose Properties.  From there, you can set the device to automatically sync when it’s connected as well as set it to reserve a certain amount of space for other information. That way a sync won’t completely fill up your device.  You’ll also want to take a look at the Quality tab.  From there you can set the maximum quality levels of media that gets synced to your device.  By setting these closer to the “Smallest File Size” area, you can get more content on your device.  Usually you’ll see 8Mb MP3 files get reduced to about 2Mb, which gives you 4 times more music in the same amount of space… which is important since many devices these days don’t have expandable storage. 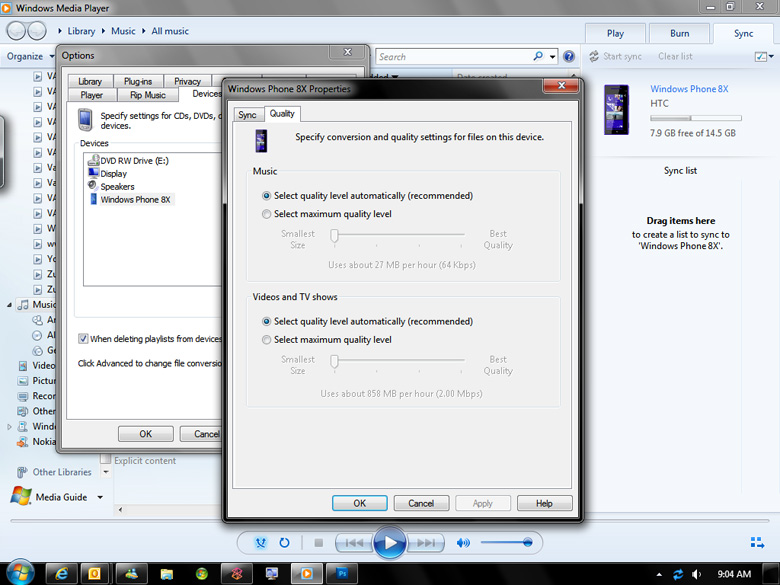 After that, you should go to the “Set Up Sync” menu again, and this time you can choose specific playlists to automatically sync with your phone. 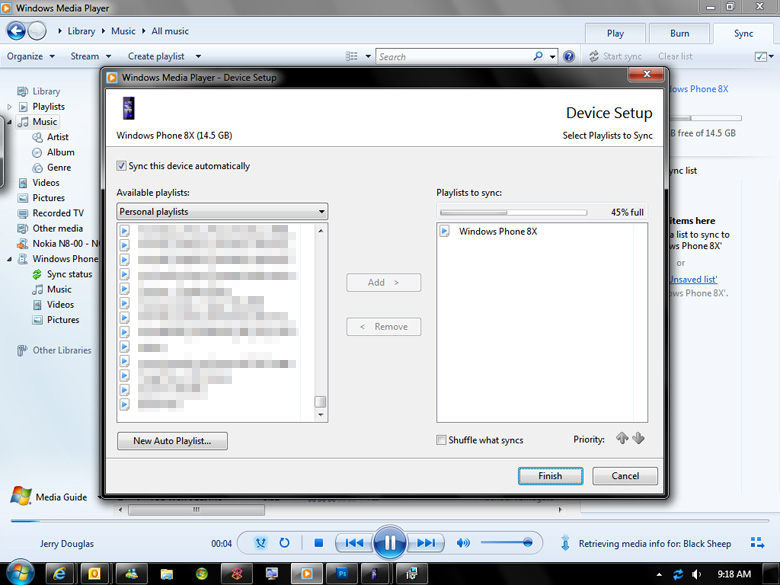 I created a playlist called “Windows Phone 8X” to controll exactly what music gets synced to the device, but you can also make automatic playlists that create collections based on a specific set of criteria. 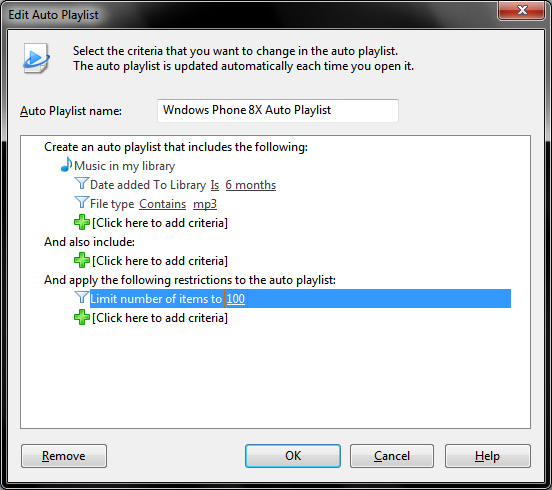 In the above screenshot, I created an automatic playlist that will create a collection of MP3s that were added within 6 months and is limited to only 100 items.  I chose MP3s because I know those are songs that I bought and won’t have any DRM issues to worry about, and I chose 100 of them in order to save space on the device.  By adding this list to my sync partnership, whenever I plug in my Windows Phone 8 device, it will automatically update the content on the device with the latest playlists.

Windows Phone 8 also has the new Cloud Collection feature which makes syncing with a desktop less important at least for music since anything you bought from the Zune or Xbox Music marketplace automatically shows up in the Windows Phone 8 music library (for streaming).  However, when you download music that way, it still takes the full quality version which is often close to 8Mb for each song.

There is no cloud collection for videos either.  Luckily Windows Media Player and its auto-playlists feature also support videos.  So I could create a playlist that automatically syncs the newest episode of a specific TV show, and when that show is recorded by my Media Center DVR, it could automatically sync to the Windows Phone the next time it’s connected (provided there aren’t any DRM errors).

So while we lost the fantastic Zune client’s sync capabilities, Windows Phone 8 actually returns to the old yet powerful sync capabilities that Windows Mobile had been using since 2003.  If only WiFi sync was still there.