This is the Honor 20 Pro, part of the new Honor 20 Series, because yes, the company is now experimenting with its first series. The Honor 20 Lite has already launched in certain countries, and this is one of two more powerful brothers.

Honor’s number series has always been about aesthetics and camera. We’ve praised predecessors like the Honor 8, 9 and 10 because they nail these basics at an affordable price, and the Honor 20 Pro is no exception.

First thing to note: this phone is actually smaller than your standard flagship. Honor is prioritizing one-handed use, so that translates to a 6.26-inch IPS LCD display at 91.6% screen-to-body ratio. (I know, when did six inches become easy to handle, but the bezels are so small that it is quite possible). The selfie camera grew to 32 megapixels, but luckily the punch hole didn’t. Honor claims a 4-1 light fusion, AKA Pixel Binning to enhance low light selfies, which we’ll be testing.

The design follows the usual unique approach, now with a theme of light in the color options that they dub as dynamic holographic design. The hollow effect is achieved by three layers of depth, being the glass, color and depth layer. There are two color options: Phantom Black and this Phantom Blue, and they sport what Honor calls four sided glass to add curves all around for ergonomics.

Even the fingerprint scanner has been mounted on the side with the one-handed approach in mind, which makes sense so long as you’re right handed.

As for internals, there’s a Kirin 980 processor, 8 gigs of RAM, up to 256GB of storage, a 4000mAh battery with a Super Charger in the box, and Dual Nano-SIM. If you’re wondering what’s missing, well there is no IP rating, there’s only a single firing speaker, and the box gladly includes a dongle because there is no headphone jack, no wireless charging. 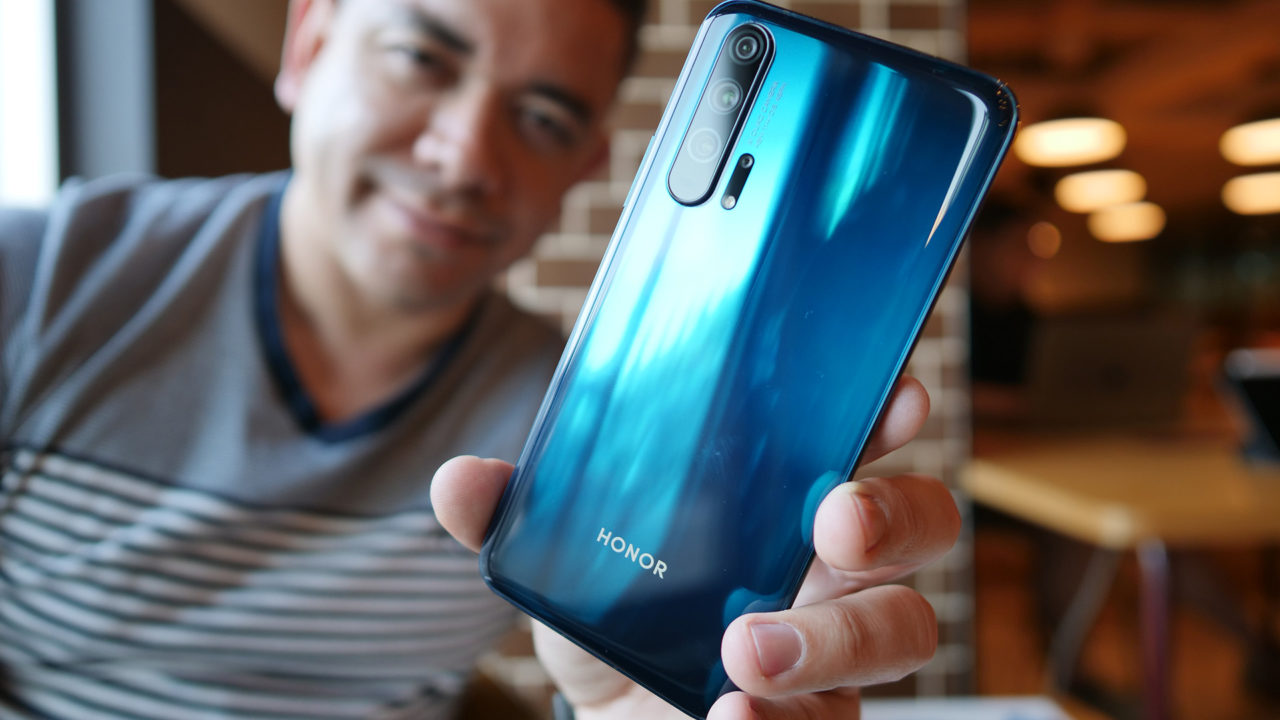 The Camera is a huge deal, though. The primary 48 megapixel Sony IMX586 is the first smartphone camera that I know of with f/1.4 aperture. 4 in 1 light fusion, AKA Pixel Binning gives you a brighter 12 megapixel shot, and there’s OIS and laser autofocus. We have a Super Wide angle 16 megapixel camera at 117 degrees of field of view, and Night mode does support it. There’s also an 8 megapixel telephoto with 3X optical zoom, 5X hybrid zoom and 30X digital, which we even hear can do moon shots. Last but not least the small little camera is not ToF. Nope, that’s a 2 megapixel macro camera that helps you get as close as 4cms from your subject.

Benefits with the camera are being able to have portrait mode without a crop, night mode as I mentioned, but I don’t see the Ultra Clarity mode available as we see on the Honor View 20. 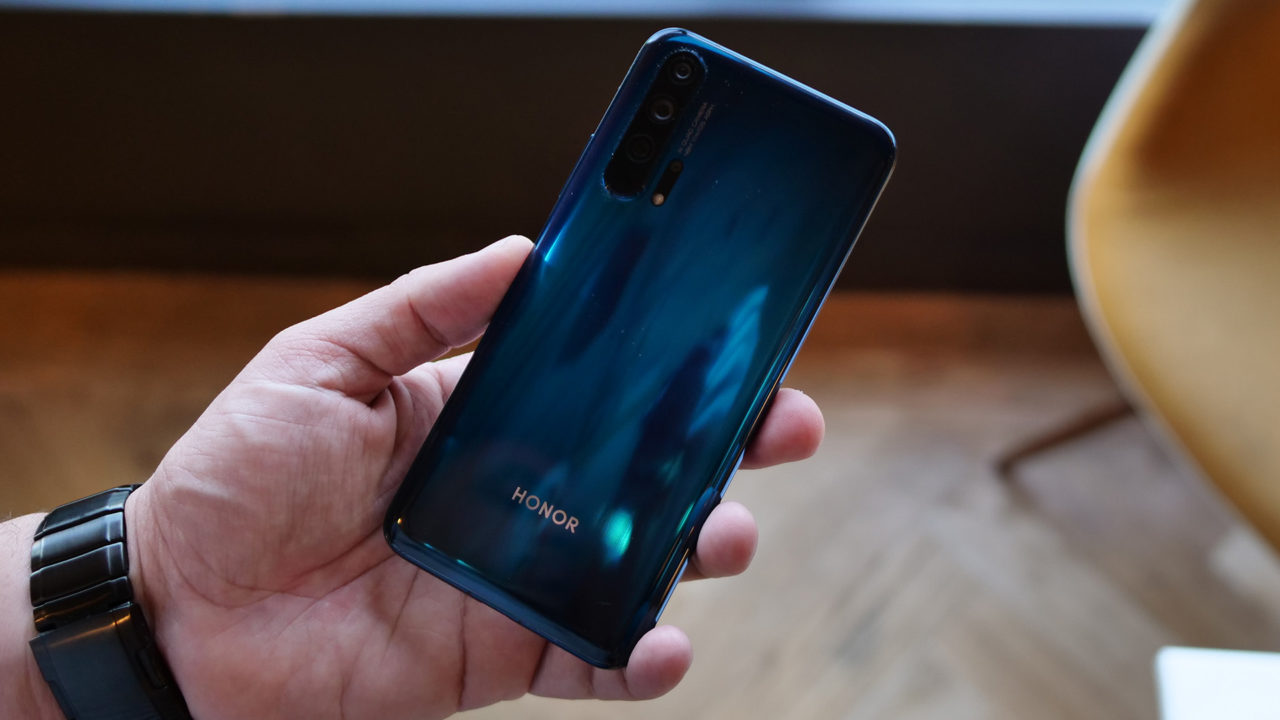 We have Magic OS 2.1 on top of Android 9 Pie. Given Honor’s relationship with Huawei’s R&D, they claim this allows them to do a lot of tuning in-house, like offering a GPU Turbo 3.0 for games, letting you play Fortnite at 60 FPS out the box.

The user interface is not necessarily my favorite, but it is quite snappy, and in the three days that I’ve had this phone, battery life has proven to be really good.

An irony is that even if there aren’t dual firing speakers or a headphone jack, there’s a Virtual 9.1 surround sound with an algorithm that studies the source and adapts audio, which Honor claims is ideal for gaming. It means you’ll be able to hear audio from different directions as you play. 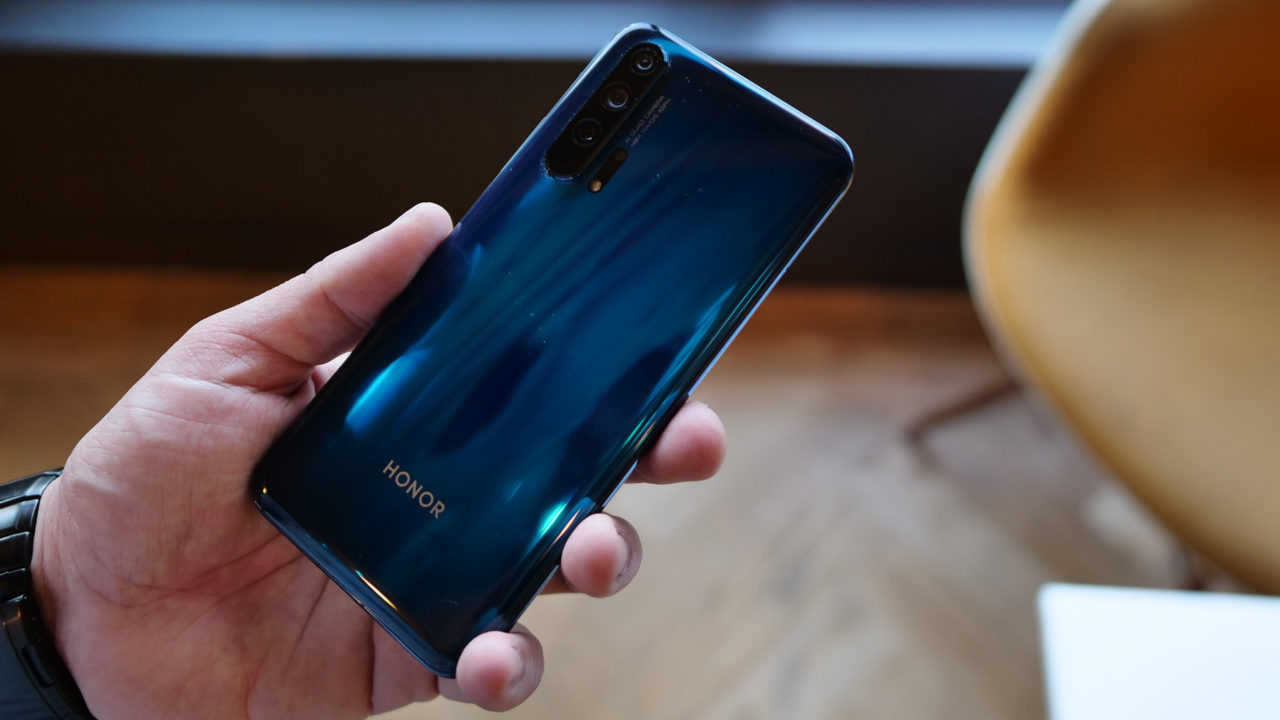 At the time of our briefing we weren’t given price points, but a ballpark figure they gave me was that this phone would be priced below 650 euros, the base model sub 500. Oh and if you want those differences with the Honor 20, the primary camera is 48 megapixels with f/1.8 and no OIS, 16 megapixel Ultra-wide, same 2 megapixel macro, a depth sensor instead of the telephoto, and no laser autofocus. Storage is 6 gigs of RAM, 128 gigs of storage. Yet, visually they aren’t really that much different.

But yes, this is the Honor 20 Series. So far my first impressions are that they are a good option for those looking for a powerful gaming phone with a great camera, one handed design and a tight budget. There are other phones in this price range that are also powerful, so it’ll be interesting to put them head to head in future comparisons. Let us know which ones would you like to see in the comments down below. Obviously I’ve only had this phone for a few days so it’s not enough for a full review. Also comment on what else you’d like for us to test.

In order to exit the bootloop, reset the device by entering safe mode and delete the image file, or do a hard reset at the cost of erasing all data.