A 5.8-inch Honor 10 is expected to be unveiled in China tomorrow, and expanded to the UK next month, with an overall design and spec sheet similar to those of the non-Pro Huawei P20.

Huawei sub-brand Honor has all but confirmed a new AI-focused Honor 10 high-end smartphone for a domestic launch on April 19, followed by a UK-specific May 15 announcement, and hopefully, a wider Western expansion sometime next month as well. If there was any lingering doubt, a number of trusted tipsters and China’s very own communications regulatory agency have made it clear what’s coming is basically a rebranded version of the non-Pro Huawei P20, possibly with a slightly lower price tag attached to its name.

According to Tenaa records associated with various model numbers starting with “COL”, the Honor 10 is indeed smaller than the Honor View 10, aka V10, at 5.84 inches. It’s also less than a millimeter taller and wider than the P20, the same 7.7mm thick and 12 grams lighter, packing a 3320mAh battery, compared to the P2o’s 3400 and Honor View 10’s 3750mAh cells. 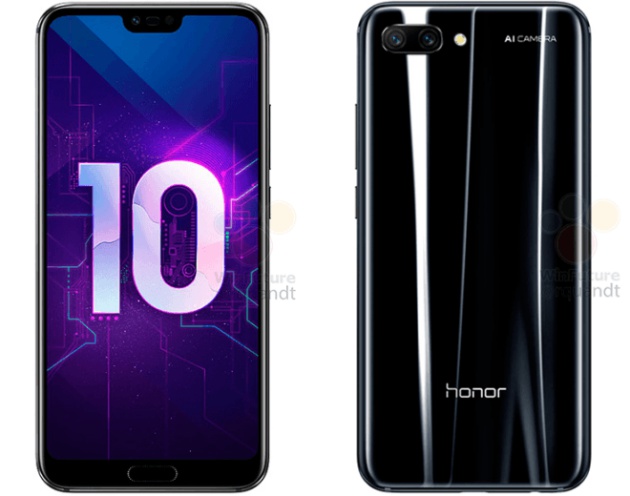 The three handsets will undoubtedly share a Kirin 970 processor, capable of making your life easier and your photography experience smarter with the help of artificial intelligence. Speaking of cameras, the Honor 10 is unlikely to be endorsed by Leica, but its horizontally-arranged 16 + 24MP rear-facing shooters still sound impressive. The same goes for a single 24MP selfie cam that’s likely borrowed from the P20 duo, housed by a similar iPhone X-inspired notch.

The design on the whole is similar to the P20’s look, based on high-quality renders unearthed by “master of cheap scoops” Roland Quandt, with a front-mounted home button/fingerprint reader, and snazzy color options including a blue/pink combo with a gorgeous gradient effect. There’s also a shiny mirror finish on the back of the black and teal Honor 10 variants, clearly inspired by previous releases in the same smartphone series.

If priced aggressively enough, and launched widely around the world, this bad boy may have a shot at outselling both the Honor View 10 and Huawei P20.