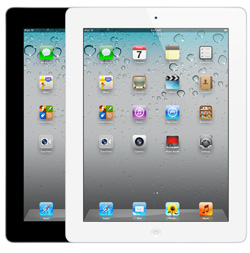 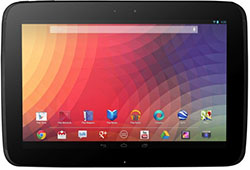 The Nexus 10, made by Samsung, is Google’s second Nexus tablet and first ten-incher. Being a Nexus it guarantees the purest Android experience and comes, out-of-the-box, with the latest version of Google’s mobile operating system, Android 4.2 Jelly Bean. It features incredibly good specs including a whopping 2560 x 1600 resolution. While Google doesn’t confirm the presence of a Samsung Exynos 5 SoC by name, it does state that the tablet runs a dual-core A15-based SoC with Mali T604 GPU, exactly what we were expecting. The price, as it is also the case with its smaller brother, the Nexus 7, is very affordable at the $400 mark for the 16GB model, and $500 for the 32GB flavor.

The Surface RT represents Microsoft entry in the tablet business with its self-made hardware. The Surface RT will be followed by its bigger brother, the Surface PRO, at the beginning of next year, so if you want a full Windows 8 experience you should wait for that. This surface runs Windows RT, a special version of Windows 8 dedicated for ARM processors. Owners of the Surface RT will only be able to run Microsoft Office and Internet Explorer pre-installed as legacy Windows 8 apps; all the others will have to be purchased and downloaded from the Windows Store. If that’s what you’re after the Surface RT is featuring a 10.6-inch screen with 1366 x 768 resolution and is powered by an NVIDIA Tegra 3 processor. Also in are 2GB of RAM and storage options which include 32- and 64GB variants. You can also purchase covers which also act as keyboards: touch and type covers are available in several color options. Base model starts at $499.00 and price goes all the way up to $699.00. We reviewed the Microsoft Surface with Windows RT on November 2. 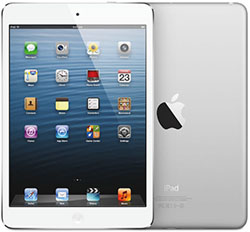 Apple strayed away from its 9.7-inch iPad policy for the first time with the iPad mini and its 7.9-inch screen. It not only made the iPad mini smaller but also more comfortable to hold compared to the larger sized-brother. The iPad mini packs the same specifications as the iPad 2, including the A5 chip and the 1024×768 resolution, only this time, on a 7.9-inch screen. At just only 0.28 inches (7.2 mm) in thickness and a weight of 0.68 pounds (308 gr.) it is very easy to hold with one hand. It has a rear-facing iSight five-megapixel camera and a 1.2MP FaceTime HD webcam on the front. It runs iOS 6 and has access to Apple’s extremely rich selection of 275,000+ tablet-optimized applications. The cheapest model comes with 16GB of Internal Storage and goes for $329 while the most expensive offers 64GB of storage and cellular radio for $659. We reviewed the Apple iPad mini on November 8. 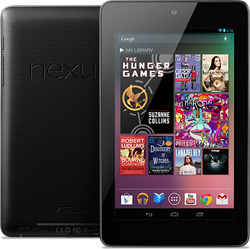 operating system. While inexpensive, the Nexus 7 doesn’t skimp on power and features. It has a quad-core Nvidia Tegra 3 CPU. The display, while a bit dull in terms of color saturation, is crisp and clear thanks to its 1280×800 resolution. Unfortunately, there is no cellular data option on the Nexus 7, so it must always be used with WiFi. Also, you cannot expand the storage with a microSD card, unlike other Android tablets. It’s available for $199 or $249, depending on whether you want 8 or 16GB of storage. We reviewed the Nexus 7 in July. 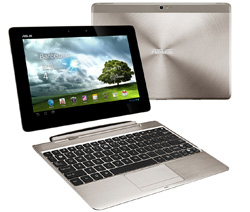 If you want an Android tablet but want a detachable keyboard, the Asus Transformer Pad Infinity TF700 is what you should look for. It’s got a high resolution screen at 1920×1200, allowing you to play back full 1080p HD video. The display has fantastic color saturation and the tablet is powered by an Nvidia Tegra 3 quad core CPU and is running on Android 4.1 Jelly Bean. The Transformer Pad Infinity TF700 can dock with a keyboard, giving you a laptop-like workstation to be more productive. Unfortunately, this tablet is only available with WiFi. It’s available in 32 or 64GB configurations which will run you $499 and $599, respectively. 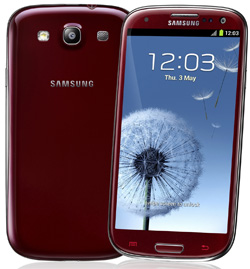 The Galaxy S III, available on all carriers with LTE networking, is the follow up handset to Samsung’s strong-selling Galaxy S II franchise. It’s available starting at $199 for a new two-year contract for the 16GB with the option of expanding storage via a microSD card. It features a larger 4.7″ display at full 1280×720 HD resolution, providing fantastic contract thanks to the use of a Super AMOLED HD panel. The battery has also grown in size to 2100mAh, providing more than enough power to last a day. It’s also quite thin at only 8.6mm in depth. While the phone feels natural in the hand thanks to rounded edges, many find the slick plastic coating to feel a bit cheap and to pick up fingerprints easily. Besides that, the Galaxy S III has a dual-core Snapdragon S4 CPU with 2GB of RAM if purchased for the US, or a quad-core Exynos CPU with 1GB of RAM if purchased in Europe. It’s available in a variety of colors such as pebble blue, marble white, and amber brown, depending on which model you choose. It ships with Android 4.0.4, but an update to Android 4.1 is expected in Q4. We reviewed the international Galaxy S III in June, the Verizon Galaxy S III in August, the AT&T Galaxy S III in July, and the Sprint Galaxy S III in July. 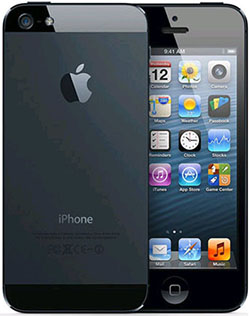 Apple redesigned the iPhone 4S and unveiled a completely new, though in general, similar iPhone with the iPhone 5. The glass at the back has been replaced by aluminum and the screen on the front is now a widescreen at four inches in diagonal. The screen resolution has been bumped up all the way to 1136×640 and the internals have all been upgraded. Powering the iPhone 5 there’s an Apple A6 chip with two cores to deliver fluid user experience, productivity and gaming. The camera, while still at eight megapixels, has been rethought and improved, WiFi got faster and it now has LTE capability. It is powered by iOS 6 and has access to Apple’s catalogue of more than 700,000 titles. It is available on contract with AT&T, Verizon and Spring and goes for $199, $299, and $399, depending on storage options. We have reviewed the iPhone 5 at the end of September. 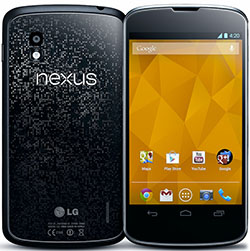 This year’s Nexus phone is made by LG and it has much better specs than the Galaxy Nexus, if you can live without LTE capabilities. Introduced together with the Nexus 10 and Android 4.2 Jelly Bean, the LG-made Google Nexus 4 is extremely cheap. The 8GB Nexus 4 will run you about $300, though without room to expand that, you might want to go with the 16GB model for the nonetheless affordable $350. Under the hood there’s a quad-core Qualcomm Snapdragon S4 Pro SoC, 2GB of RAM, a 4.7-inch HD IPS LCD display, eight-megapixel camera at the back, 1.3-megapixel webcam on the front, NFC, wireless charging capabilities, plus all the usual suspects. If you’re looking for a pure-Android experience on great hardware, the Nexus 4 is the way to go. 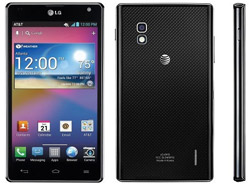 The Optimus G, available on Sprint and AT&T with LTE in November, is LG’s flagship phone for 2012 and features LTE networking. It’s available for $199 with 32GB of storage on both carriers. It’s the first phone to feature Qualcomm’s highly anticipated quad-core Snapdragon S4 Pro CPU, providing fantastic performance and great battery life. The 4.7″ display is an HD IPS panel with 1280×768 resolution, featuring fantastic contrast and color saturation. At 8.4mm in depth, it’s a bit thinner than the Galaxy S III. The AT&T model has an 8MP camera, while the Sprint can capture photos at 13MP. The Optimus G ships with Android 4.0.4, but an update to Android 4.1 is expected by year-end. We reviewed the LG Optimus G on AT&T on October 22. 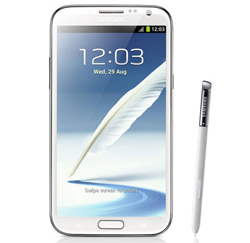 With the Galaxy Note II, you get the biggest display of any smartphone on the market. Available on all four carriers starting at $199 for 16GB of storage, the Galaxy Note II is an LTE-capable phone with a massive 5.55″ 720p display. Inside there is an Exynos quad-core CPU with 2GB of RAM, providing impressive performance. The magic of the Note II comes with the functionality of the integrated stylus, with Samsung calls the S-Pen. This stylus allows you to draw on your calendar, draw into emails, take screen crops, take notes, and more. It has a button that, if pressed, will allow you to double-tap against the screen and draw forth a note overlay. The Note II also features a neat multi-task feature called SplitView that lets you run two apps at once. It’s available in pebble white or graphite gray, and ships with Android 4.1 Jelly Bean. If you’re looking for good one-handed usability, you should look elsewhere. We reviewed the Note II in October. 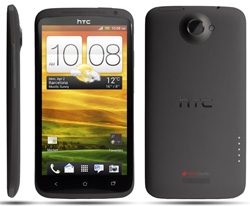 The One X+ is an update to HTC’s previous flagship, the One X, available on AT&T with LTE networking for $199 in November. Inside, it packs a faster Nvidia Tegra 3 quad-core CPU, a bigger battery, and more storage. It’ll also ships with the latest version of Android, Jelly Bean, and offers an upgrade to HTC’s Sense interface. It also adds an amplified external speaker, allowing audio to sound significantly louder over the previous One X. The front-facing camera has also been improved, and utilizes the dedicated ImageSense chip. 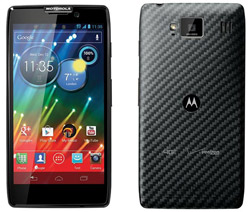 The Motorola Droid RAZR HD, available on Verizon with LTE networking for $199, is a follow up to the first original Droid RAZR. It’s claim to fame is that it’s quite thin at 8.4mm in depth. It has a Qualcomm Snapdragon S4 dual-core CPU and 1GB of RAM. The display is 4.7″ and 720p resolution, and the battery is an impressive 2,500mAh. It’s running Android 4.0.4 to start but will be upgraded to Android 4.1. It’s also available in an extended battery version called the RAZR HD MAXX, which has a 3,300mAh battery and a thicker 9.3mm casing. The MAXX is $299. We reviewed the Verizon Droid RAZR HD on November 1. 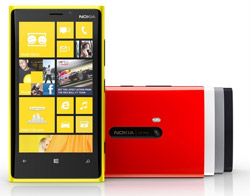 The Lumia 920, supposedly available in November on AT&T for $199 with LTE networking, is a Windows Phone 8-powered smartphone. It’s powered by a Qualcomm Snapdragon S4 CPU with 1GB of RAM and 32GB of storage. The 4.7″ display has a resolution of 1280×768. The 920 also has a wireless charging accessory. It employs Nokia’s PureView camera technology which claims to improve low-light shooting situations and provide image stabilization when recording HD video. At 10.7mm thick and 185 grams, the 920 is no lightweight. It’ll be available in several colors such as yellow, red, white, gray, and black. 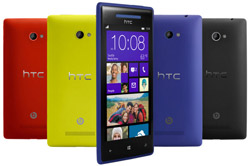 The Windows Phone 8X by HTC, supposedly available in November on AT&T for $199 with LTE networking, is a Windows Phone 8-powered smartphone. It features a design with tapered edges and a soft-touch back, granting it a thin and slip-free in-hand feel. It’s powered by the Qualcomm S4 dual-core CPU with 1GB of RAM and 16GB of storage. It has a 4.3″ 1280×768 display. The external speaker is amplified, allowing it to provide louder audio. The 8x will be available in a variety of colors such as red, yellow, purple, and black. We reviewed the HTC Windows Phone 8X on November 6.