HMD truly had a great first year selling Nokia phones, and 2018 should be even better

Finnish startup HMD Global reportedly shipped as many as 4.4 million Nokia smartphones in Q4 2017, and close to 60 million feature phones in total last year, looking at even higher numbers for 2018.
Published 14 February 2018, 05:16 EST

One of the most unlikely success stories in a long time in the always competitive and often cruel mobile industry may still be unfolding before our eyes, as HMD Global’s great first year continues to receive rave reviews from all the major market research firms.

The Finland-based exclusive Nokia brand licensee was somehow capable of going from 0 to 4.4 million unit shipments in just 12 months, according to revised estimates put together by Counterpoint Research partner Neil Shah.

That’s 4.4 million Nokia smartphones shipped around the world in the October – December 2017 quarter alone, mind you, which was reportedly a better Q4 result than the ones posted by HTC, Sony, Google, Lenovo and OnePlus, among others.

Assuming the previous numbers were correct, HMD probably sold north of 8.5 million smartphones in total last year, despite making its global market debut in earnest during Q2. Believe it or not, TrendForce analysts think Apple and Nokia are the only international brands with a “clear future of growth in 2018”, and the industry heavyweight turned underdog turned rising star could pull off a production volume exceeding 20 million units this year. 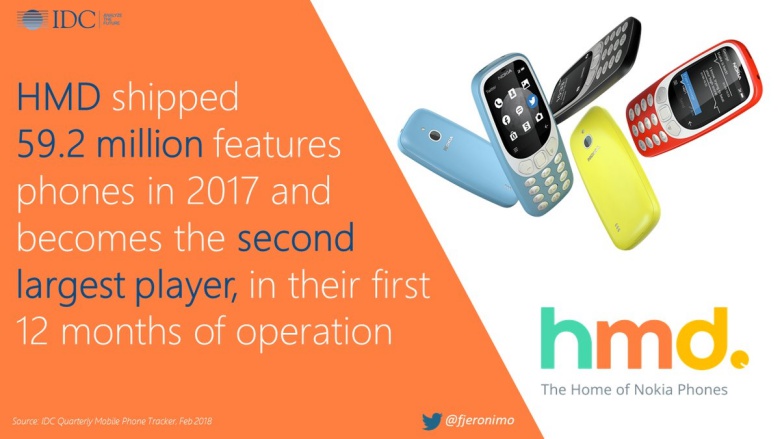 Ranked 11th in the world in holiday sales, Nokia could easily make the overall 2018 top ten for smartphones in addition to regaining dumb phone domination. Already, IDC Research Director Francisco Jeronimo says HMD was the second largest player in the feature phone segment in 2017, shipping a mind-blowing 59.2 million units, presumably thanks in large part to a hugely successful new 3310.

Nokia feature phones were number one worldwide in Q4, according to Neil Shah, and top of the European ranks for the entire year, according to Jeronimo. The revived brand was number one between October and December in Vietnam and “most” Middle East markets in terms of overall phone sales, number three in UK smartphone shipments, and number six worldwide when combining smart and dumb phones. Can you believe we’re still talking about an enterprise that didn’t exist until December 2016?