Hands on with the Samsung Galaxy Fold

We finally got our hands on the new Samsung Galaxy Fold, folding smartphone! Read on for our first impressions and a first look at Samsung’s next flagship phone.
Published 15 April 2019, 18:20 EDT

We saw the Samsung Galaxy Fold announced a while back, but we didn’t get to actually use it. The Galaxy Fold is among a few new smartphones that feature a flexible folding screen. These phones are generally normal sized smartphones when folded, at least from one angle, and they’ll unfold to a larger square shaped tablet-like device. The Samsung Galaxy Fold was the first to be announced, but today we’ve finally got a chance to actually try it out. It’s got the “inside fold” style folding, so that when folded, the larger screen is on the inside, while a smaller secondary screen is on the outside. Others use the “outside fold” method where there is only a folding screen on the outside that wraps around the device like a book cover. 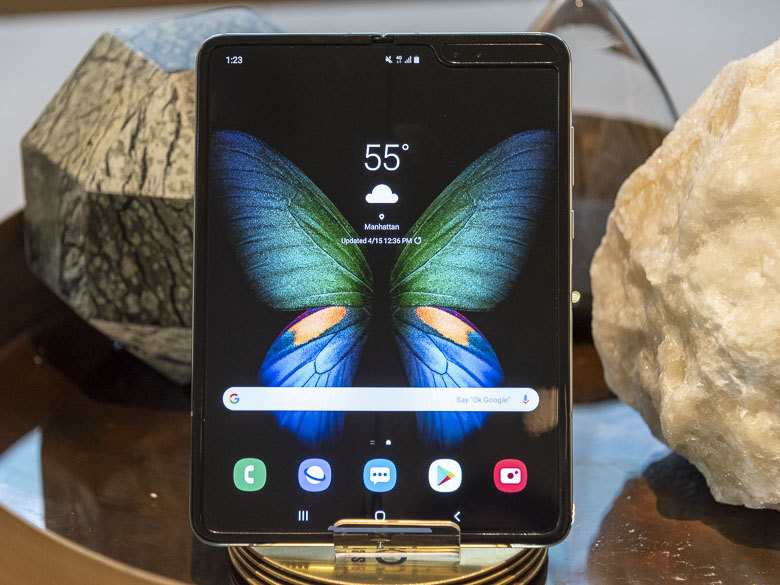 My first impressions of the Galaxy Fold are mixed. Yes, it’s definitely something new and innovative which has been lacking in the smartphones market for years (decades?) Yes, it’s kind of beautiful. Yes, having that large screen for multi-window apps that can float or snap into three panels is pretty awesome. But it also feels a bit foreign and possibly difficult to use. It may take some getting used to, and we only got to use it for about an hour so far. 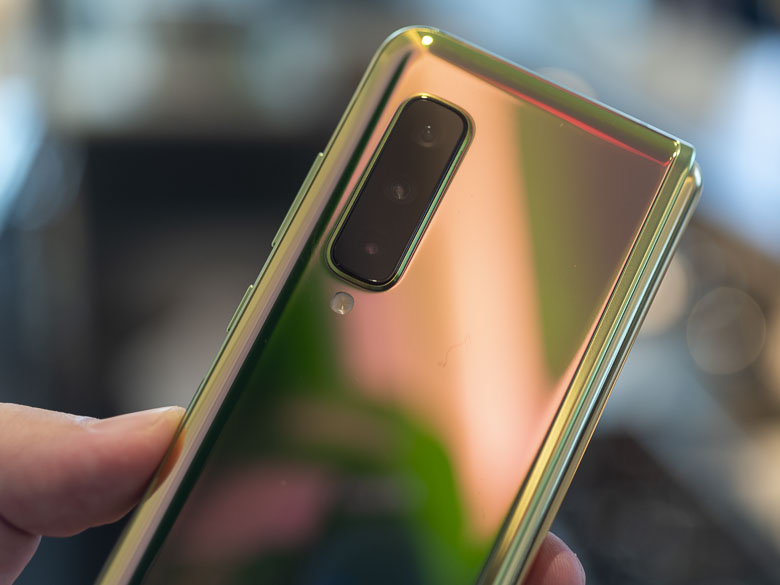 The Samsung Galaxy Fold has 3 cameras on the outside and two on the inside. The cameras are all the same as what you’ll find on the Galaxy S10 that some of you may already own. The outside cameras are all 12 megapixels with wide angle, ultra-wide angle, and 2x telephoto lenses that you can switch between. 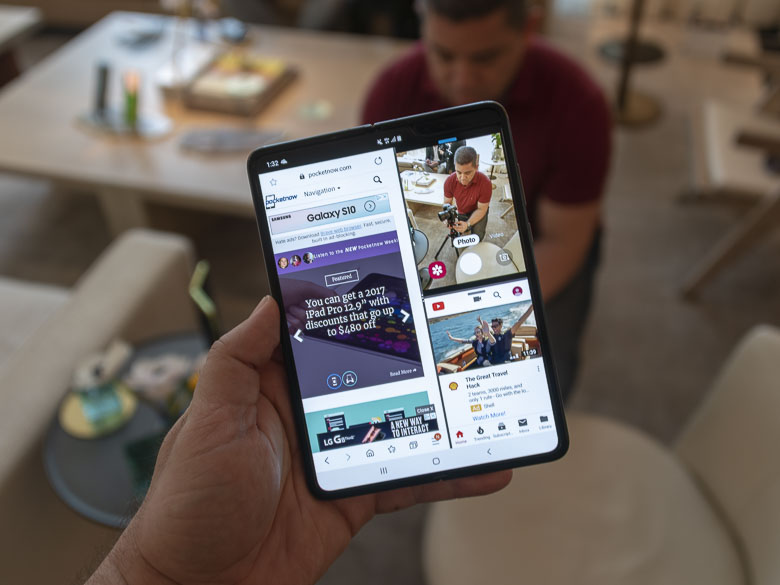 Running 3 apps running simultaneously, all at the same time is pretty cool. The camera app will stop running if it loses focus though. This snapping interface requires support built into the app as well. Apps not supported will appear as floating windows.

Getting these apps snapped or floating is not at all intuitive. First you swipe the invisible right edge of the phone and that shows a handful of app icons. From there you tap, hold, and then drag the app and the different positions will highlight as you drag. Let go, and it will drop into that position. After you’ve got more than one app snapped, each one has a little long sausage-shaped button at the top of its edge. It’s a little too thin to be finger friendly, but if you can, you can tap & hold on that sausage, then drag it to a different window. Also, if you tap once on the sausage button, a pop-up menu will appear filled with unintelligible icons. This icons represent buttons that will change the status of that window. So one might close it, one might maximize it, and one might make the window a floating window that you can drag to any position on the screen. Incidentally, you can have up to 7 floating windows here. 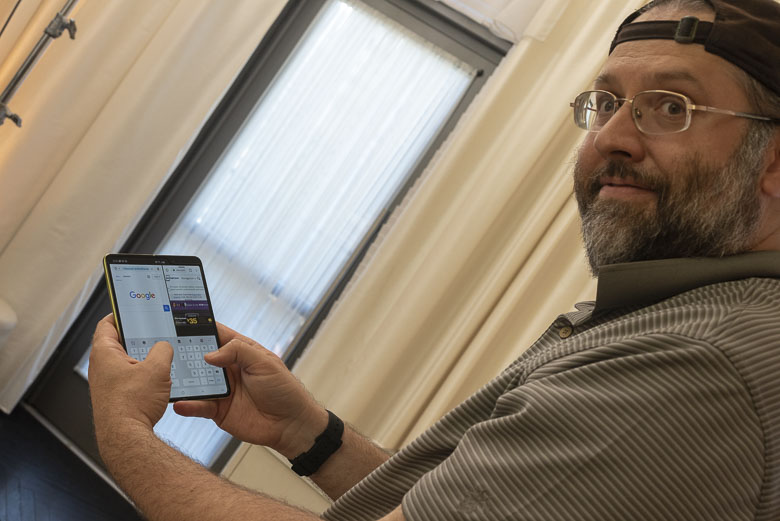 I love the split keyboard. This is great for holding the tablet like an old Blackberry and typing with two hands. 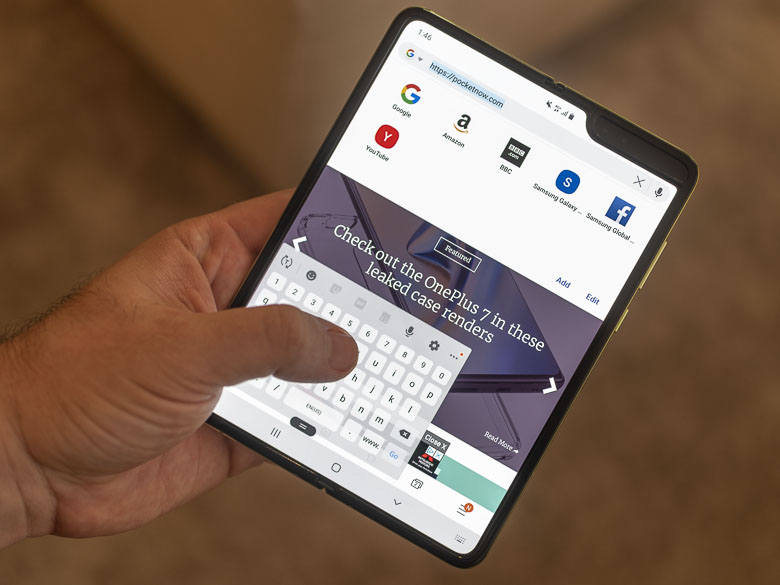 You can also make the keyboard float to the side, but I don’t notice if it supported swipe typing. The floating keyboard size can be adjusted as well to some degree. 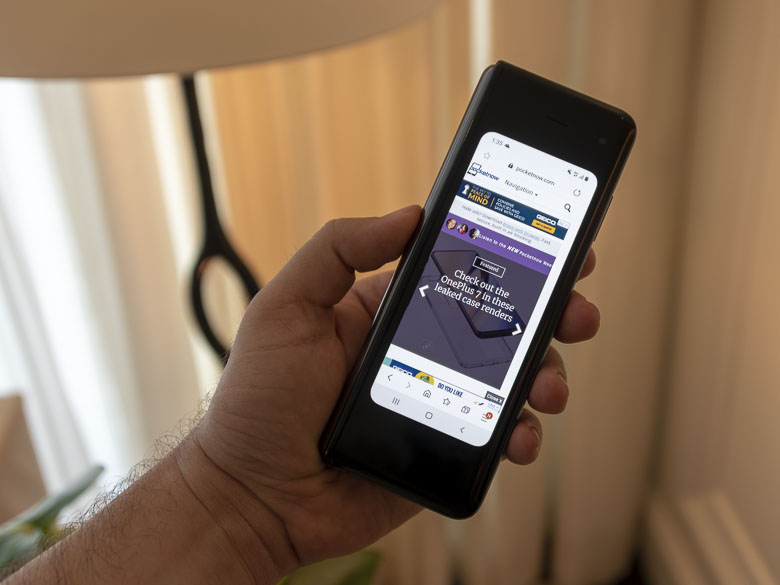 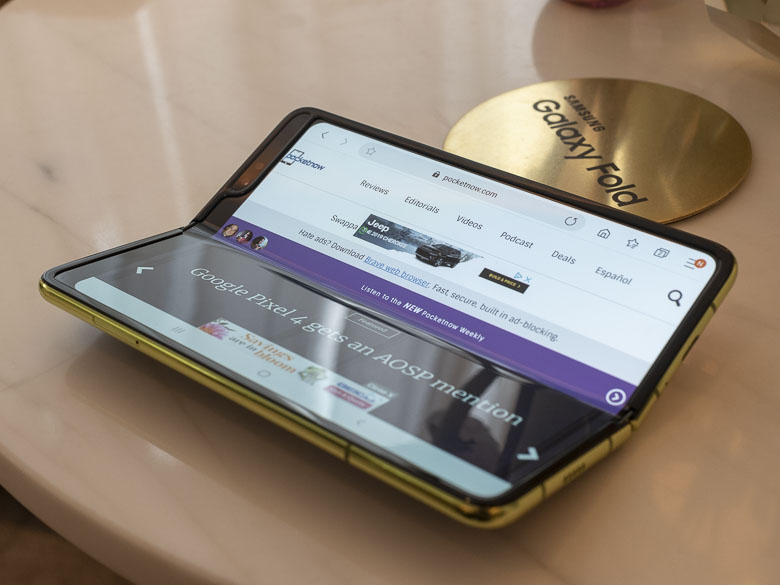 Opening the fold is spring loaded, but has a kind of at-rest position where it balances on its spine as seen above.  There isn’t enough weight on either side to set it up like a minute laptop. Both sides include separate batteries that act as a 4380mAh battery together. When you open it just a bit more, it locks into a flat position with a nice bit of friction. 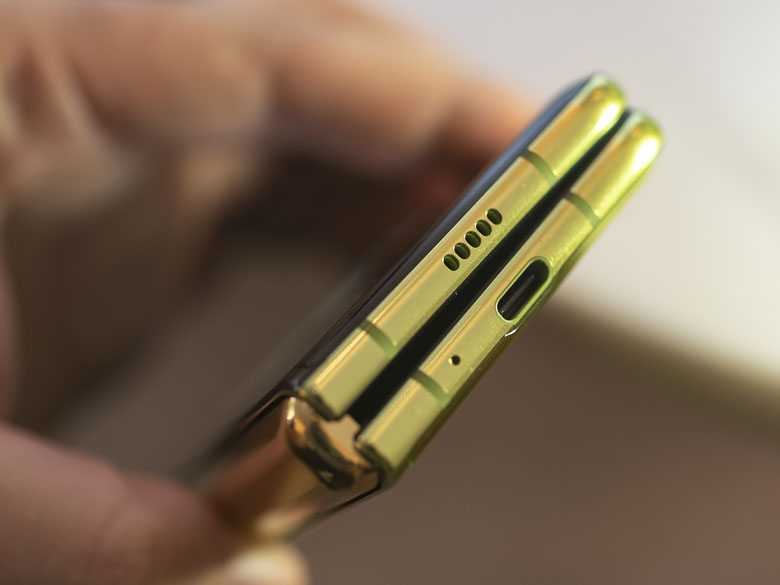 In the pocket, it feels really big. If you’re used to the form factor that most smartphones have followed for the past 10 years, the Galaxy Fold will feel very different. Above you can see the USB-C port along with the empty space inside the phone when it’s folded closed. I’m sure this is required to fit with the way the screen bends, but it looks kind of like a mistake. 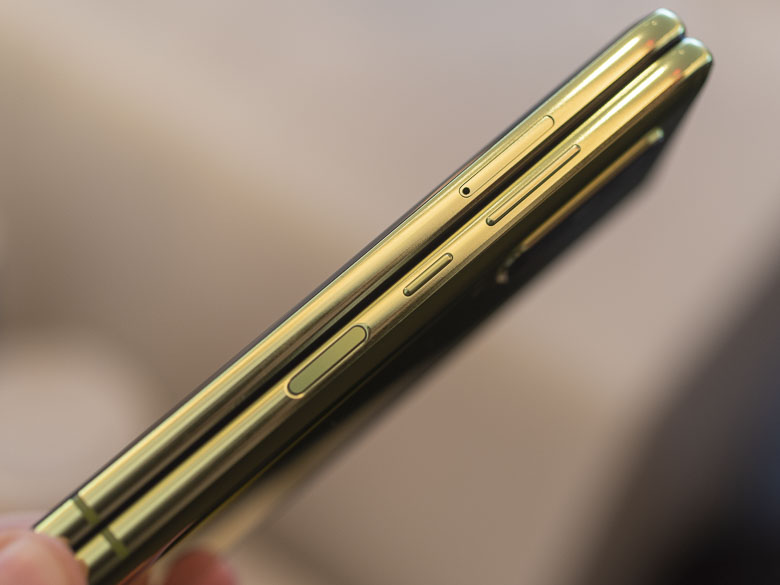 From the above angle it looks like you’ve got two phones!  This is where all of your buttons are. You’ve got the power, volume, & Bixy buttons along with the SIM tray slot. 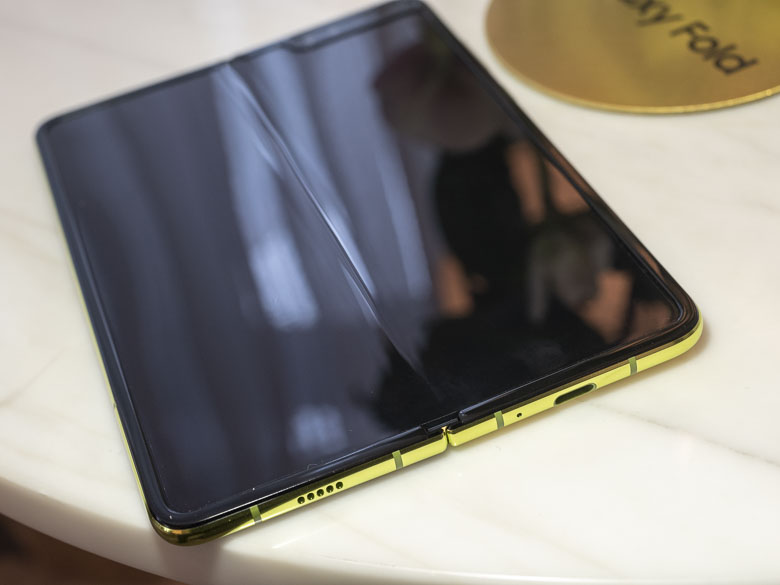 With the screen off and unfolded, yes you can see a crease or “wrinkle” in the screen from certain angles. When the screen is on, it’s barely noticeable. 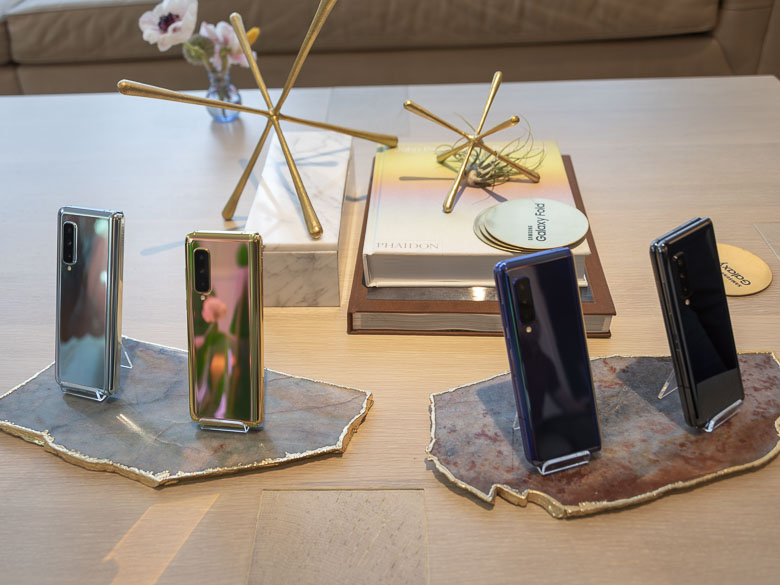 The Samsung Galaxy Fold will be available in a number of very shiny colors. 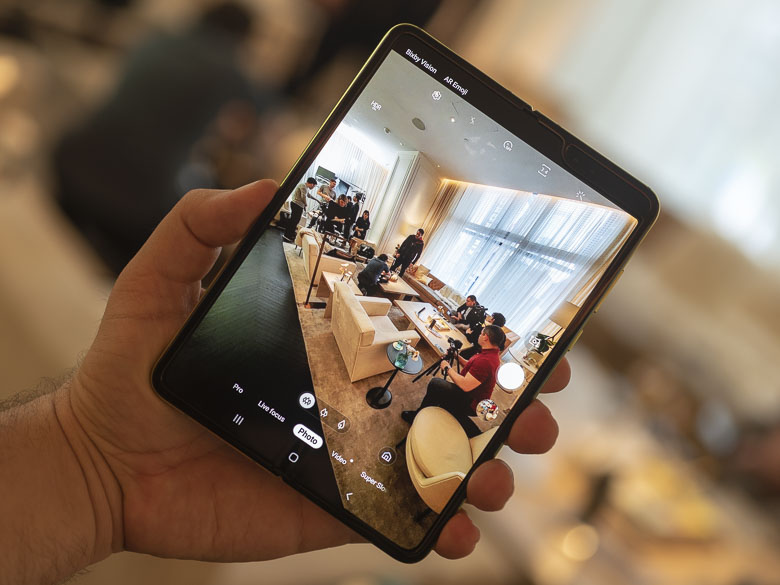 Yes, it’s pretty cool that you can get such a big viewfinder for the cameras in the Galaxy Fold, but please don’t ever hold one of these up to take photos at a concert. 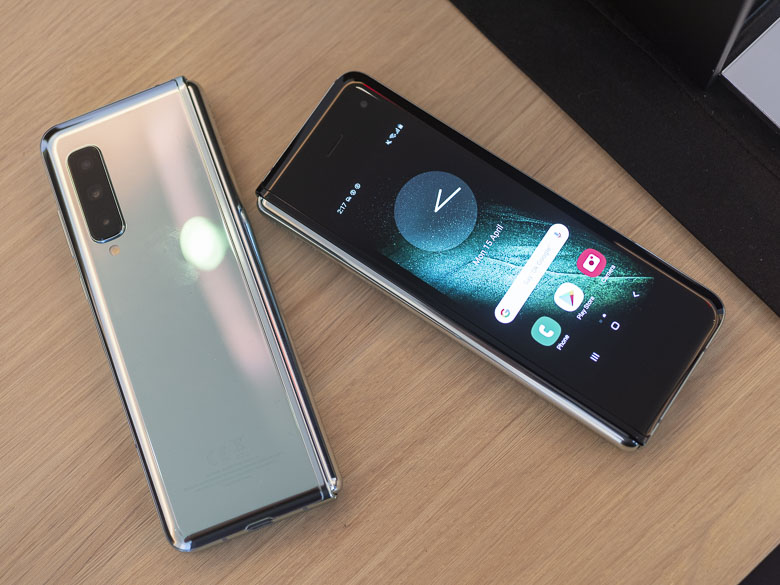 The Samsung Galaxy Fold will be available April 26 from Samsung’s website, the Samsung store, Bestbuy, ATT, and T-Mobile and its price starts at $1980. It will come with a case and Galaxy ear buds as well.

Today's best smartphone deals come from Amazon, Samsung, and OnePlus, where we find the…