Hands on with the Neo smartpen N2

We were given the chance to try out a new device that might just bring life back into the written word – the Neo smartpen N2. How does it stack up?
Published 27 May 2015, 11:03 EDT

I was never a fan of handwriting while I was in school.  Later I was introduced to fountain pens and all of that changed. My “daily carry” pen is an aluminum-bodied, steel-nibbed pen from Schrade that writes wonderfully and looks great. The downside is that all my handwritten notes are analog. I have to manually scan them – every single one – if I want them in a digital format.

Since then I’ve been looking for a digital solution. My old Apple Newton fit the bill. Notes I’d write there on it were handwritten “ink”, but digitized on the fly. Since then I haven’t found anything that works quite as well. Microsoft came close with Tablet PC with  MS Journal or OneNote. Journal, however, seems to be an afterthought for Microsoft these days – besides, I’m an Android guy.

NeoLAB Convergence recently gave us the opportunity to use a new device that might just bring life back into the written word – the Neo smartpen N2. How does it stack up? Let’s take a look. 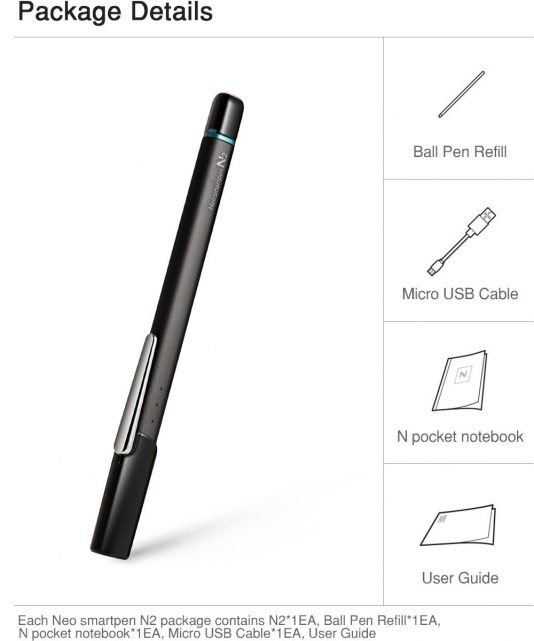 Unboxing the Neo smartpen N2 reveals the pen itself, a micro USB cables, a quick start note, user guide, spare ink refill (more on that in a bit), and a sealed pocket notebook.

The pen itself looks like a hybrid between a futuristic writing instrument and the old-fashioned fountain pen that I use everyday. It is roughly triangular in shape, with gently rounded corners. Under the tip is a window with a photo sensor, that sensor not only “scans” the text you write, but also “sees” a series of dot matrixes that come pre-printed across the special paper that you are required to write your notes on. While that’s an obvious downside, the “dot array” helps straighten and align text and is all but invisible to the naked eye. The dots aren’t included as part of the resulting text – just your letters or drawings come across.

Baek to the pen itself. Replacing the ink cartridge is easy. Pull on the tip with your fingers and the cartridge easily slides out. New cartridges are commonplace, using the Zebra 4C-0.7 refill.

Charging is pretty quick. We were able to go from 10% to 100% in about an hour. After writing several pages full of text the battery still reported 100%.

Setting up the pen is easy as long as you start by installing the app from iTunes or the Play Store. The Neo smartpen N2 works with iOS or Android, and is compatible with MyScript and Evernote. Walking through the setup is fast and easy, and results in the pen being paired with your device using Bluetooth. However, you don’t have to be paired with your phone or tablet to record pen strokes. The pen will record your strokes into its internal memory, downloaded them to your device at some future time.

If you’d prefer to sync as you write, simply tap the pen button inside the Neo notes app. Doing so will let you watch as the text you’re writing in your notebook 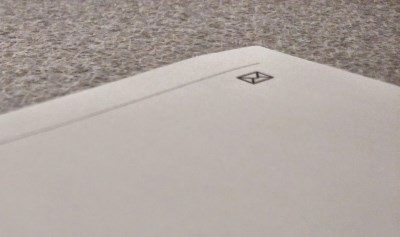 is immediately beamed into your digital notebook, stroke by stroke. Other than making sure the pen has “woken up” before you start writing (which caused the first few letters to be dropped until we got the hang of it), there really isnt much to dislike about this smartpen.

Once entered, notes can be emailed by putting a checkmark in the envelope icon at the top of the notebook’s pages. The page is attached to the email as a PNG.

Text can be transcribed from the ink strokes after downloading and enabling the transcription library for whatever language you’ll be writing in. Entire notebooks can be sent as PDF, and you can have as many digital notebooks on your phone or tablet as you have physical ones. 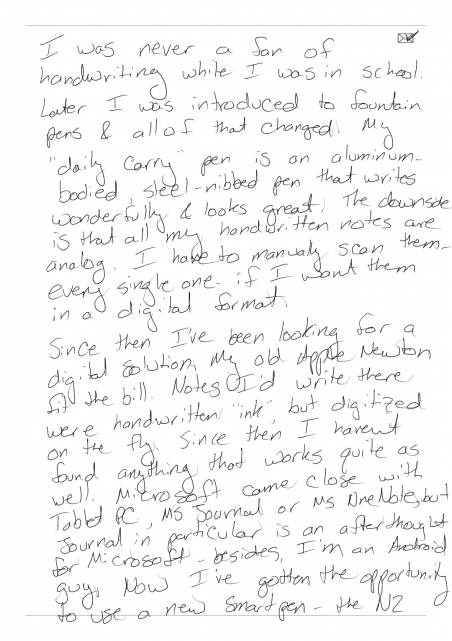 Will tho Neo smartpen N2 replace the soft keyboard on your tablet for data entry? No, but it’s not supposed to. Yes, you need special paper, but that gives you better pen-stroke recognition than other solutions we’ve tried. No, you can’t use it as a stylus on your phone or tablet, but that isn’t a big deal. Instead all your written text can be immediately captured and digitized, then transcribed into searchable text in a matter of moments. Who wouldn’t like that?

Just to show off what can be done with the Neo smartpen N2 and the Neo notes application, this entire article was written with the pen, then transcribed, corrected, and formatted. Not bad, eh?

Transcription is far from perfect. Several times words would be placed out of order, Z and 2 were almost universally swapped. Punctuation is hit or miss, and line breaks are inserted at the end of each handwritten line, even if the sentence continues on the next one. All that having been said, about ten minutes of editing was all that it took to take the transcribed text and turn the handwritten version into the digital article you’ve just read. All in all, not bad, especially considering how far from perfect my handwriting is. If you’re looking for a cross-platform solution to digitize your handwritten notes as you write them, the Neo smartpen N2 is worthy of your consideration.

LG has reportedly partnered with China’s BOE to supply the flexible OLED panels for its upcoming rollable smartphone.

There is Snapdragon X55 5G modem with support for 5G mmWave.