Hands on with the HP Elite Dragonfly

The HP Elite Dragonfly is one of the lightest, most-powerful, travel friendly tablet PC convertibles around. Take a look at our quick hands-on with it.
Published 18 September 2019, 02:00 EDT

Today HP is announcing a new ultralight premium tablet PC convertible called the HP Elite Dragonfly. HP has put a lot of effort into making this Dragonfly tablet PC convertible extra light, but without compromising on speed, capabilities, and battery life. It weighs only 1Kg! It’s got great battery life too with about 16.5 hours on the lightweight battery option or 24.5 hours on the performance battery option.  It also supports HP Fast Charge which will recharge the battery to about 50% in only 30 minutes. Configuration options include Intel Quad Core U series processors with optional vPro, up to 2Tb nVMe storage, and up to 16Gb RAM. You also get 2 Thunderbold USB C ports, HDMI, 3.5mm audio jack, and a security lock. There will be 3 screen type options: 1W FHD, HDR 400 UHD, and HP Sure View Gen3.  Pricing will start at $1549. 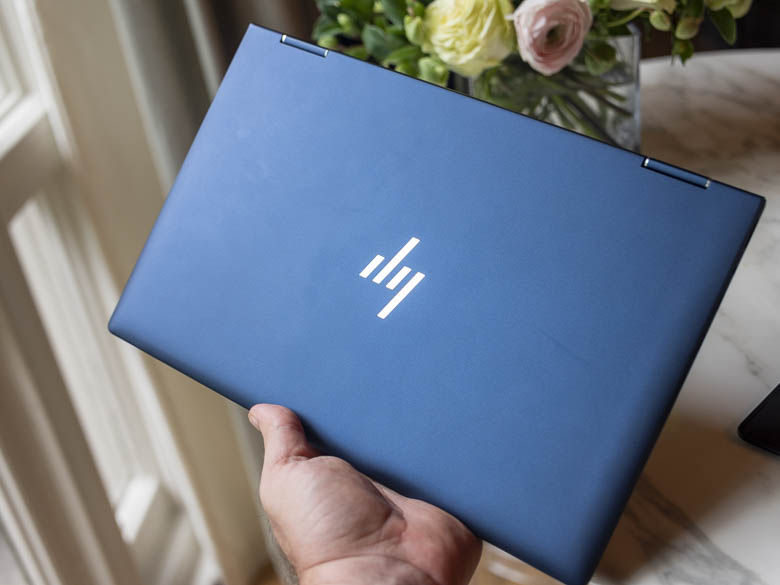 Also, it comes in blue.  This shell is a cut magnesium allow covered with a dark blue finish.  It really looks great. 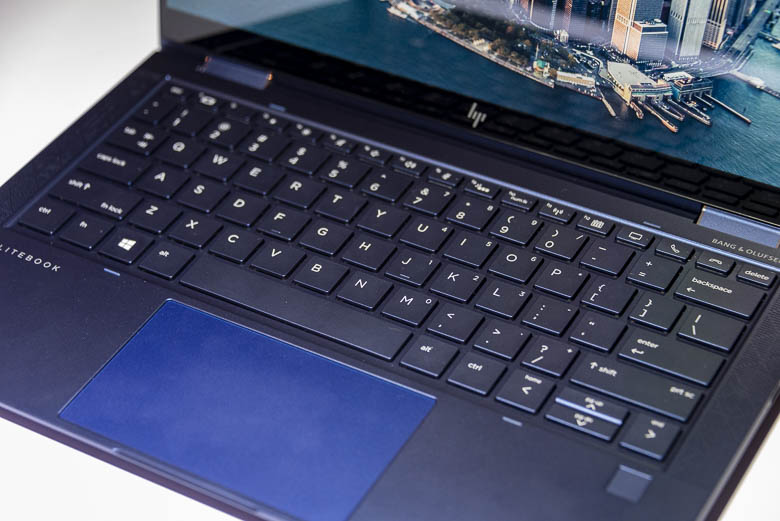 The keyboard and trackpad are a dark blue too, while the trackpad stands out with a brighter shade.  You’ll also see a fingerprint scanner on the bottom right for easy log-in. 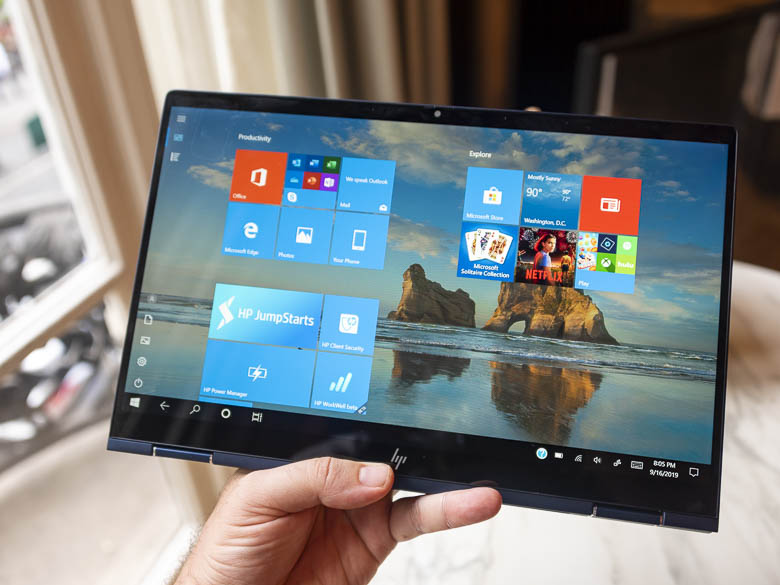 The keyboard hinge rotates 360 degrees in order to fold into a tablet PC. The side and top edge bezels are too narrow to comfortably hold this as a tablet, but the lower hinge area has room enough to get a good grip on it. 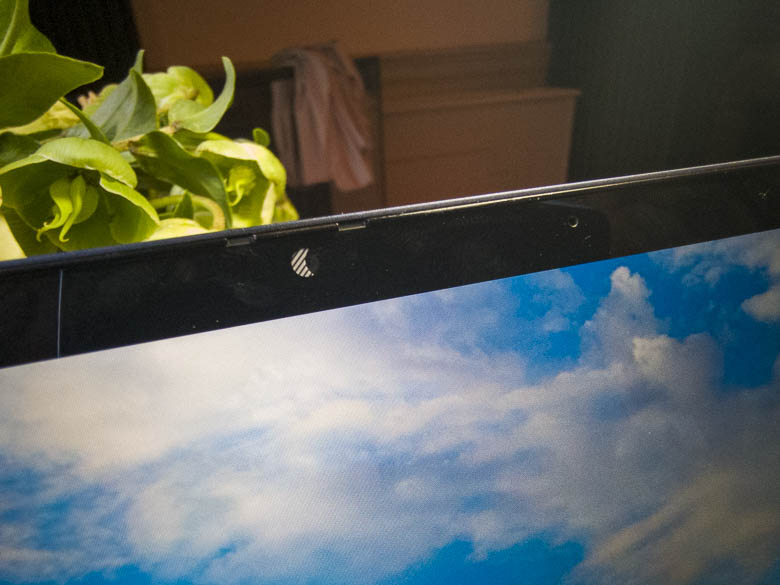 The video calling camera at the top edge even has a tiny little sliding lens cover so you can make sure the camera isn’t being used to spy on you.  There’s a diagonal lines pattern on the cover so you can easily tell when it’s closed. 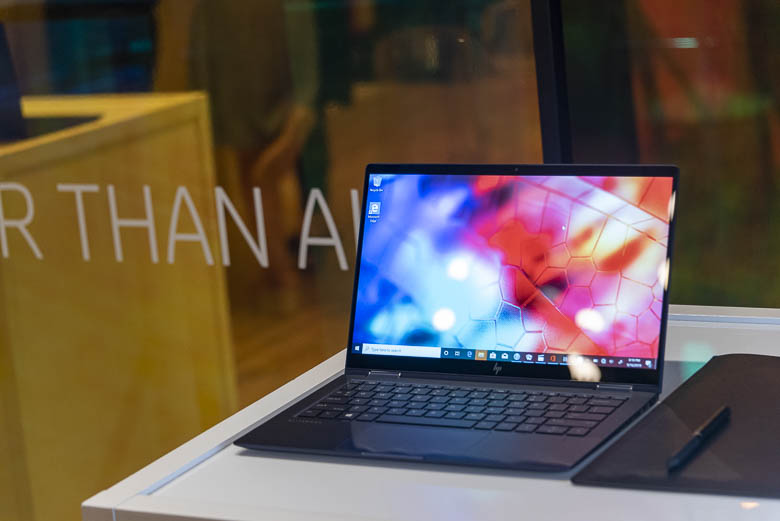 Of course there’s a stylus for the HP Elite Dragonfly and a thin leather case which includes a slot for the stylus. Unfortunately there aren’t any stylus holders on the device itself. 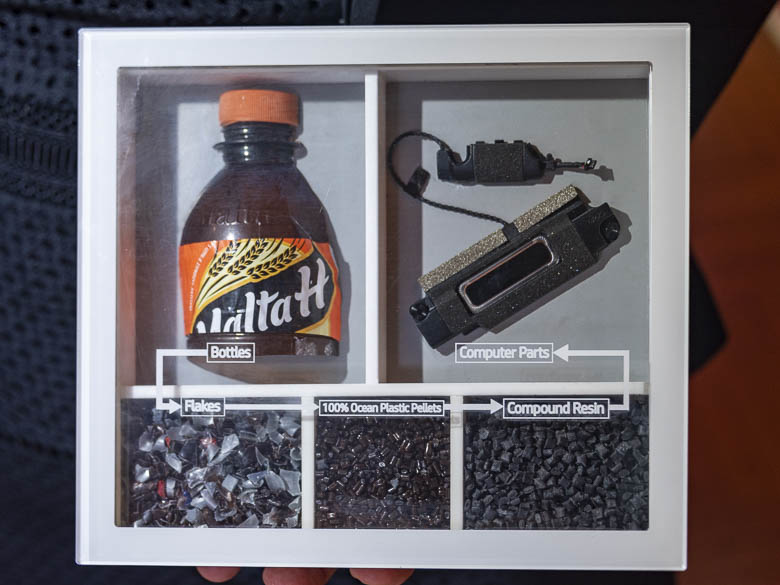 By the way, the HP Elite Dragonfly is the world’s first notebook computer that uses ocean bound plastics. It’s only the speaker housings that use these plastics right now, but HP has recycled 35 million plastic bottles in other products such as ink cartridges, displays, and now the Dragonfly speakers. 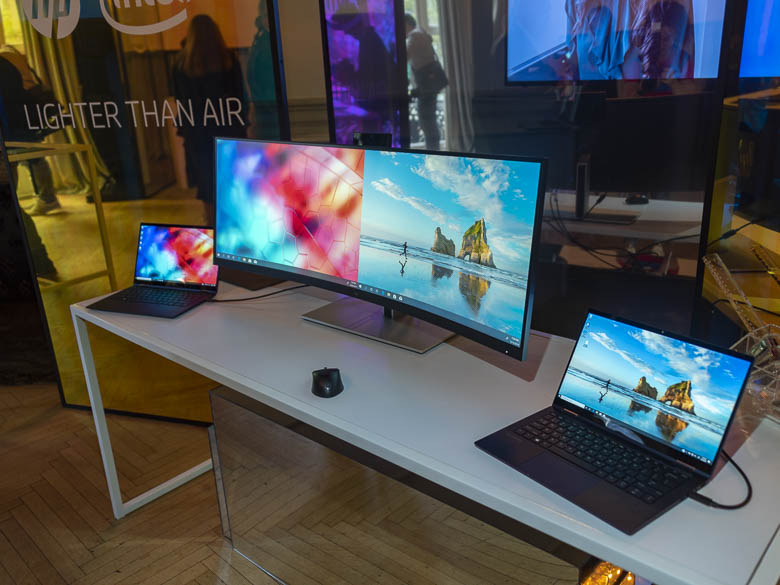 HP also announced the HP S430c curved ultrawide monitor with the HP Elite Dragonfly and this monitor has some tricks up its sleeve too.  You can use it as one ultrawide curved monitor for a single computer, but it has two USB-C ports so you can actually plug in two computers and have each one use half of the screen.  What’s more is you can connect a keyboard and mouse to the monitor hardware and those can be used on both connected computers.  With special HP software installed on both computers that is.  The special software also enables drag/drop of content between computers.  It even supports multiple operating systems such as Windows, macOS, Ubuntu, and Android. The HP S430c 43.4″ curved monitor will be available for $999.

The company is expected to launch its next AirPods Pro, iPad Pro, and AirTags. It might also unveil an iMac.

We have found amazing deals on the latest M1 Macbook Pro and MacBook Air, as well as several smartwatches that would be the perfect gift
YouTube 1.8M
Facebook 570K
Twitter 197K
Instagram 133K
RSS