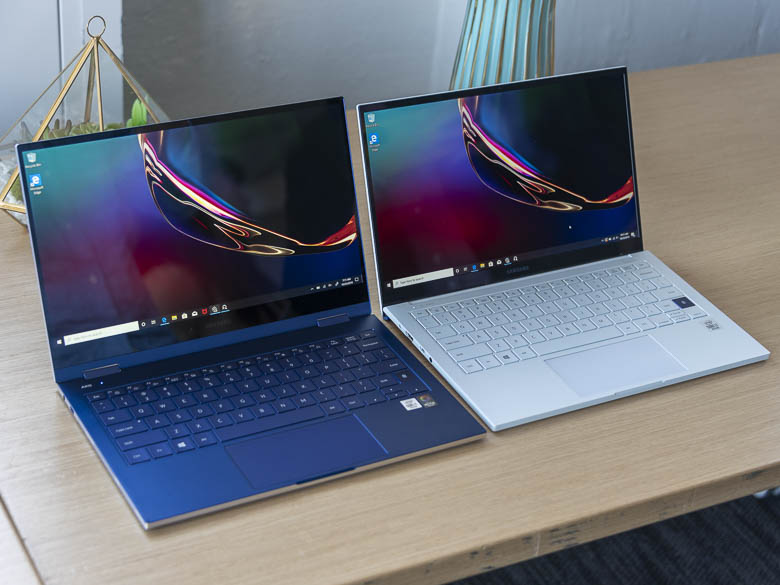 The Galaxy Book Flex on the left comes in blue and includes a 360 degree hinge for flipping the screen around.  The Galaxy Book Ion on the right is mainly a regular laptop form factor. 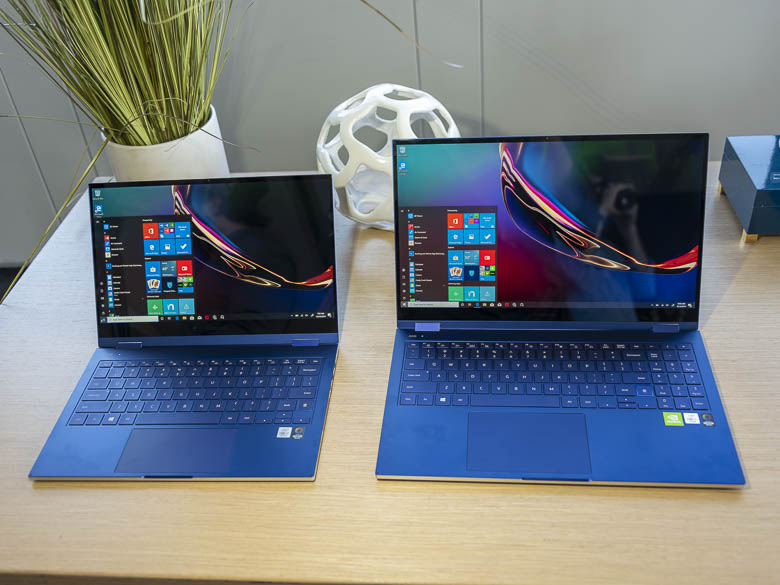 Both the Galaxy Book Flex and Galaxy Book Ion are available in 13″ and 15″ screen sizes.  The 15″ size options will also let you configure a discreet MX250 GPU if you want. 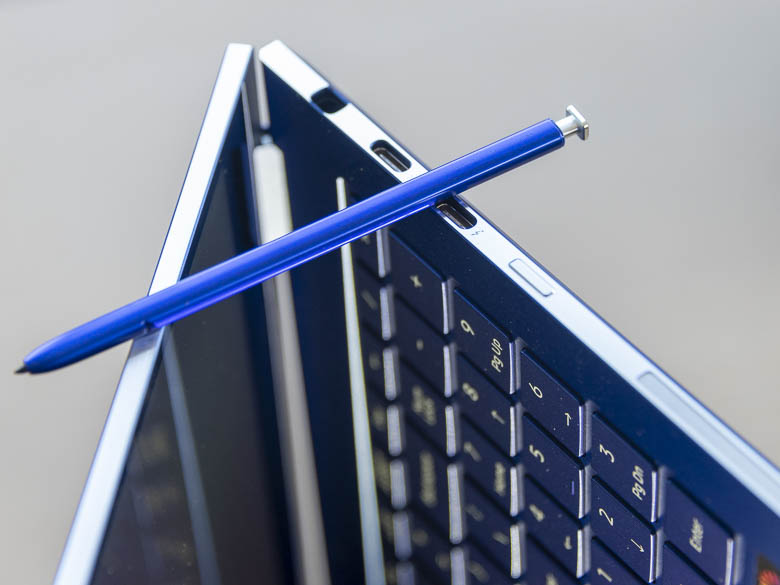 The Galaxy Book Flex nicely includes a spring loaded slot for the S-Pen and it’s the same type that’s used in the Samsung Galaxy Note smartphones. 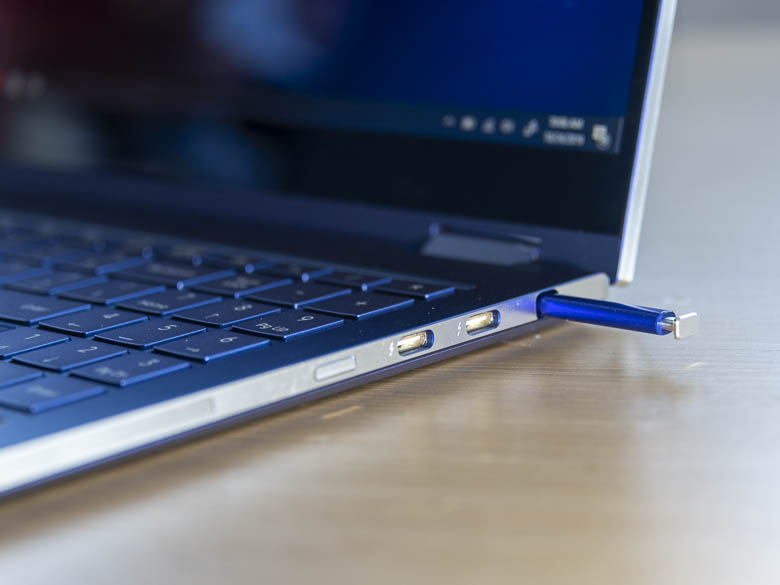 Of course we’ve got USB-C ports on the side as well. 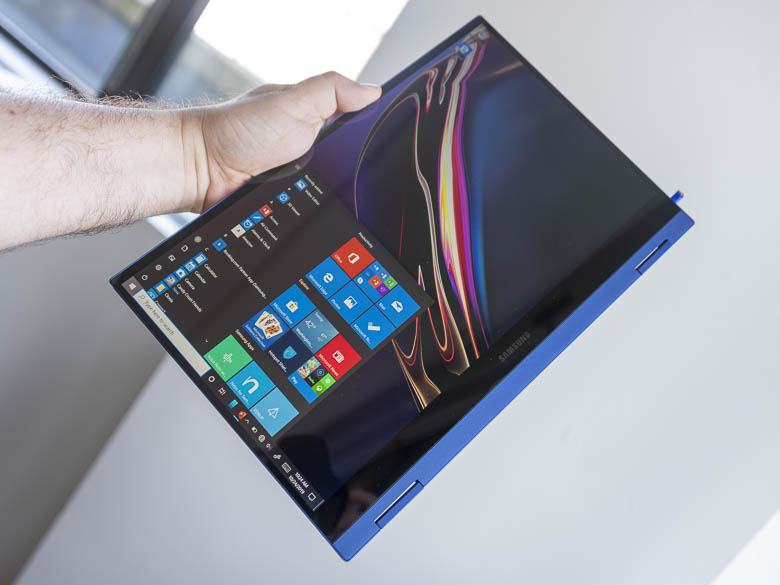 The extremely thin bezels on the screen make the Galaxy Book Flex difficult to use in tablet mode, unless you hold it by the larger hinge area. 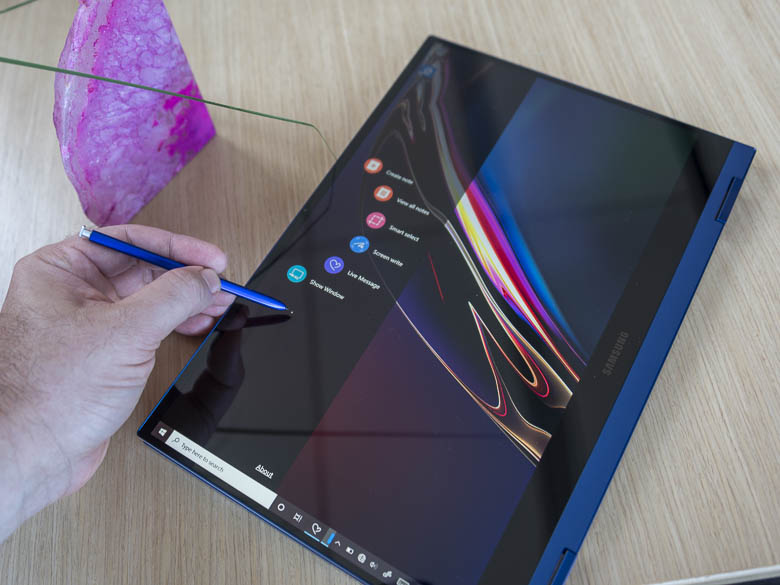 There are some special Samsung S-Pen programs included with the Galaxy Book Flex, too, and the S-Pen has bluetooth with support for some air-gesture controls similar to the Galaxy Note 10. 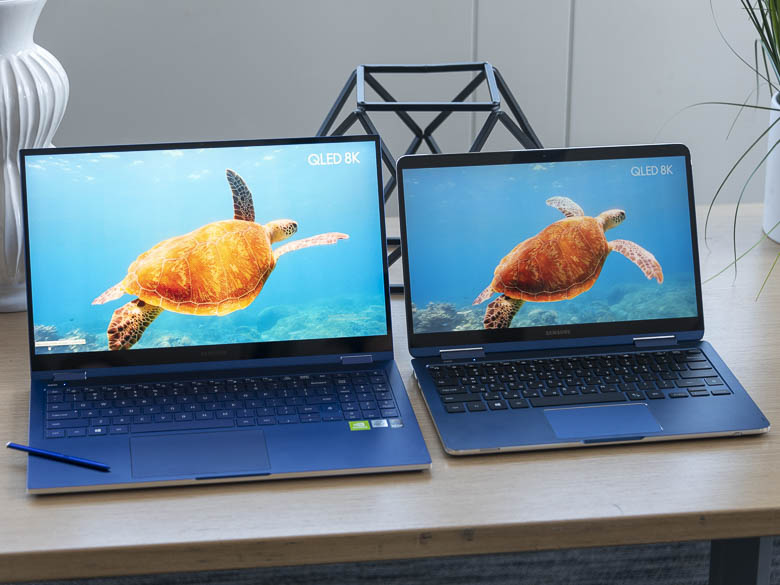 Above is a comparison of the Galaxy Book Flex’s new QLED screen and the Samsung Notebook 9 Pen’s older screen.  The QLED screen is capable of being much brighter.  Both the Flex and Ion include Samsung’s new QLED screen and this is the first time QLED tech has been used on laptop computers. Previously it was only used in Samsung Televisions.  QLED gives you similar image quality to OLED, but with a decreased cost in production.

Both the Samsung Galaxy Book Flex and Ion have “outdoor” screen modes for their QLED displays that enable 600 nits of brightness versus the usual 400 nits in regular mode. Of course, the outdoor mode will reduce battery life.  These QLED screens also have 178 degree viewing angles and cover 100% of the sRGB color space. 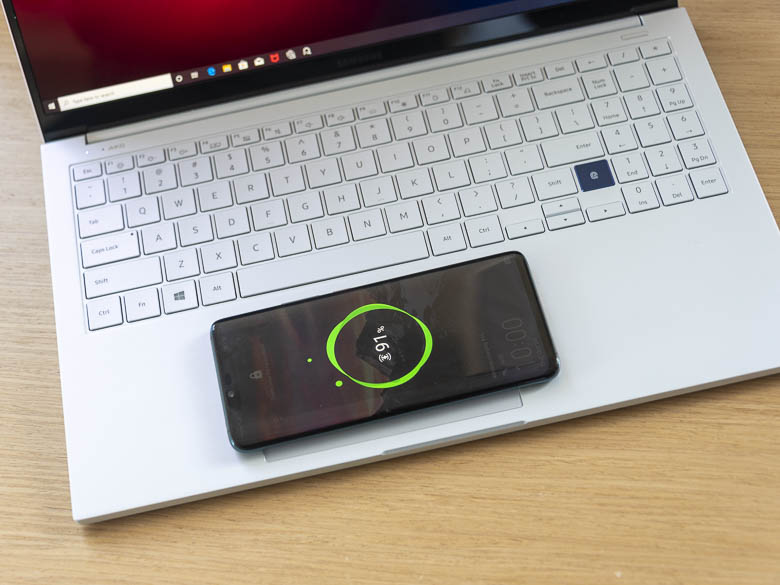 Both the Galaxy Book Ion and Flex have Qi wireless charging coils built into the touch pad area of the laptops. It’s kind of awkward to use though. You have to type a special shortcut key to enable it and this also disabled the ability to use the track pad. So if you’re using it to charge something, then you take the device off the touch pad charger, you have to remember to type the special keyboard shortcut that switches the touch pad back to touch pad mode instead of wireless charging mode. It doesn’t just automatically switch back to touch pad mode when a charge-able device is removed. 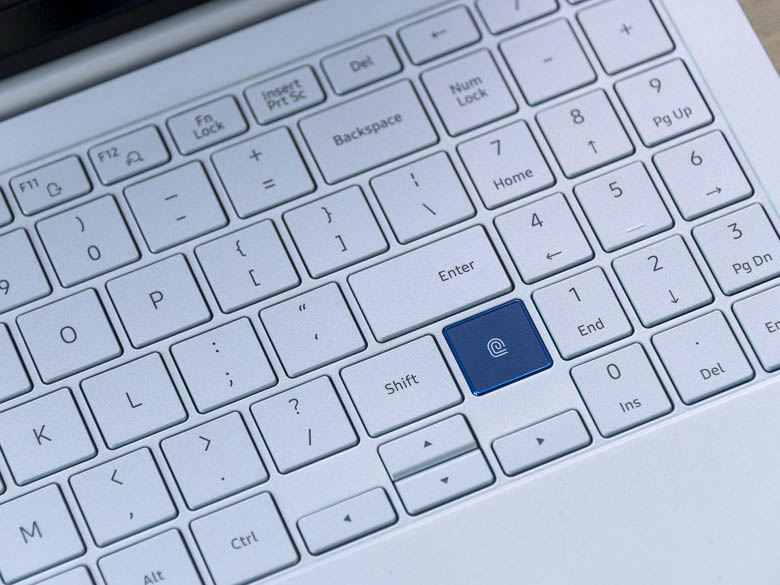 Both laptops have a fingerprint scanner built into the keyboard next to the right “Shift” key. I imagine setting this to recognize your right pinky finger would make bio-metric authentication while typing pretty easy and ergonomic. 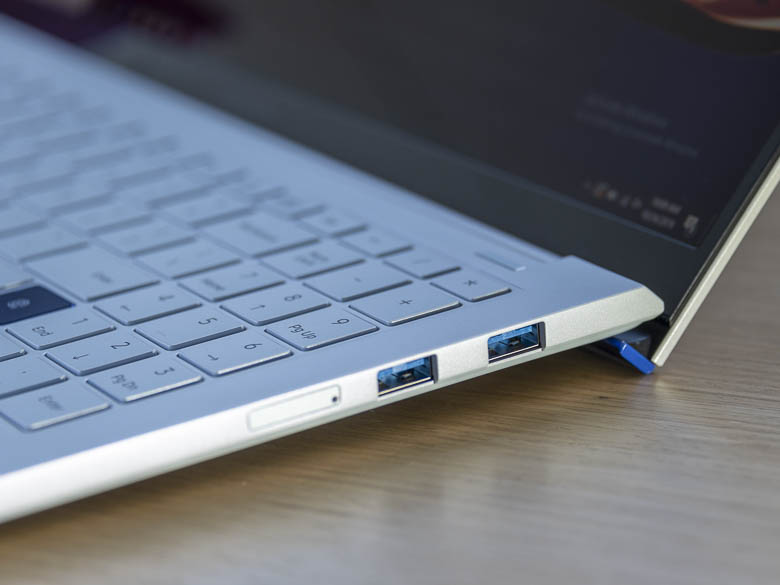 The Galaxy Book Ion has some better options for ports which include two full sized USB-A ports, and you’ll see a little slot above for a MicroSD memory card.  You’ll also notice how the screen hinge has a little ledge to it that lifts the laptop’s base off of the table a bit.  This helps to give the keyboard a slightly more comfortable angle and it also helps increase air-flow for cooling. 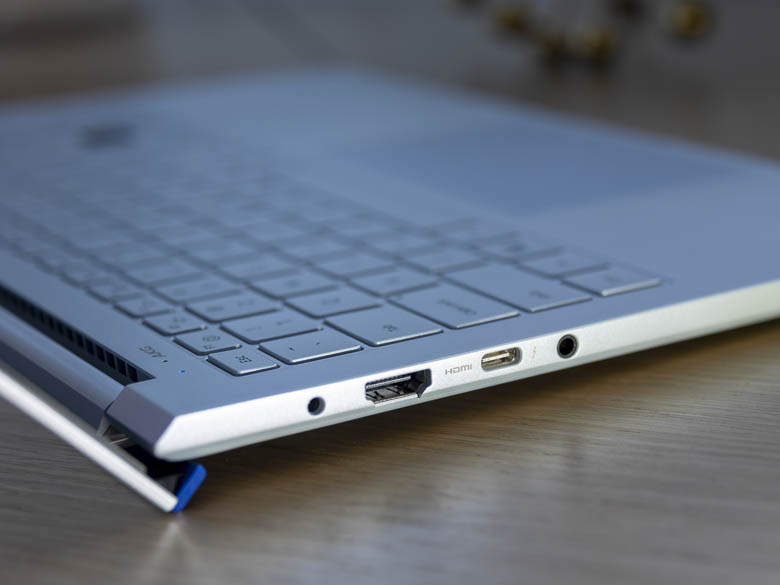 The other side of the Galaxy Book Ion has a cylindrical charging port which is better than USB-C since no rotational orientation is required at all.  There’s also a full HDMI port, a USB-C port, and a 3.5mm headset port. 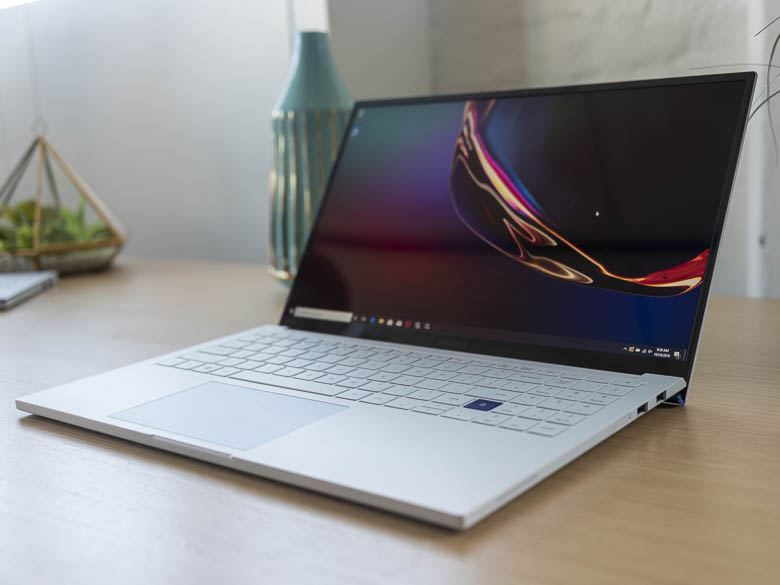 Both the Samsung Galaxy Book Flex and Galaxy Book Ion will be available in the first half of 2020, so unfortunately you won’t see any of these for the holiday season of this year. No other pricing or availability details have been announced. You can find some more specifications details below: