Windows 10 Mobile updates should eventually roll out to 50.4 percent of WP devices currently in use, according to AdDuplex.
Published 24 March 2016, 05:45 EDT

While it’s certainly nice to see more than a dozen devices confirmed for Windows 10 Mobile updates, many of which are getting the sweet software goodie packs as we speak, we can’t overlook the fact Microsoft over-promised and under-delivered in terms of both ETAs and hardware requirements.

Sure, all’s well that ends well, but what about Lumia 1020 and 1320 owners? As it turns out, there may simply not be enough of those to justify the effort put into optimizing the new OS for ancient Snapdragon S4 Plus processors.

Otherwise, how do you explain that, despite these shocking omissions and the more predictable Lumia 520 or 530 snubs, the majority of Windows mobile devices in global use should move to W10M… eventually?

That’s 50.4 percent, to be precise, according to AdDuplex calculations, with the remaining 49.6 percent never to be brought up to date officially. The platform’s leading cross promotion network also claims roughly 15 percent of the phones capable of running Windows 10 Mobile already do, which is another number that might leave Android users green with envy. 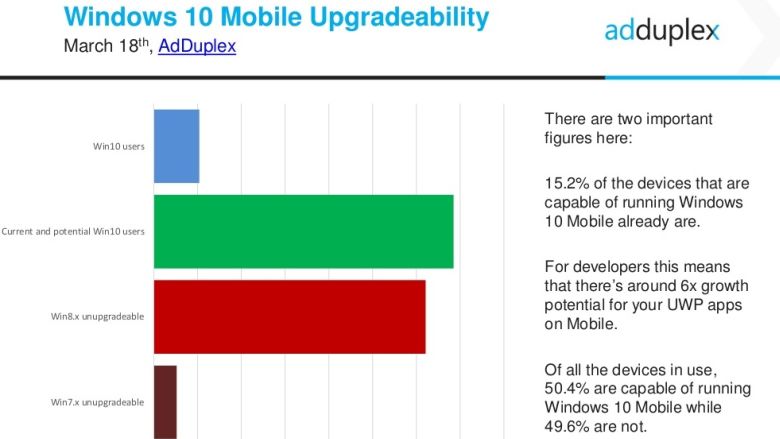 Early this month, Google said a measly 2.3 percent of its endorsed products were on 6.0 Marshmallow, and while it’s impossible to estimate how many of the hundreds of millions of active Androids will ultimately score the update, it’s definitely nowhere near 50 percent.

The figure of course surges to over 80 percent as far as iOS 9 goes, so Redmond appears to be doing a decent but short of remarkable software support job.