GS3 Spotted With Quad-Core Exynos In Addition To 2GB RAM?

From the moment we first learned that Samsung was preparing dual-core variants of the Galaxy S III with 2GB of RAM, we’ve been wondering: why make quad-core and 2GB RAM an either/or choice, when Samsung could create a version of the phone with both? At the time, it seemed like we might have to wait for the arrival of a future Samsung Android to see its quad-core Exynos paired with that kind of memory, but now there’s some evidence suggesting that Korea could see such a GS3 released in the near future.

This leak shows some specs for SK Telecom devices, and on the far left there is what appears to be a quad-core Galaxy S III with the 2GB of RAM we were looking for. If you’ll think back to before the GS3 was announced, we heard a report out of South Korea that claimed the nation would see an unusual version of the phone that maintained the quad-core Exynos from the international release, yet supported the country’s LTE bands. It looks like this could be that very same unique GS3 variant, as it’s also got that same LTE support.

If this information is accurate, we’re a bit jealous of Korean smartphone users, who should get an opportunity to pick up this handset sometime next month. For now, at least, it doesn’t appear Samsung has plans to release a similarly-equipped GS3 in any other markets. 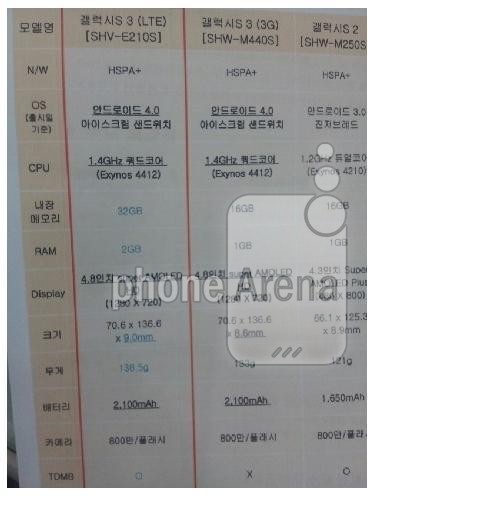