How to take great pictures with the LG G4

The LG G4 brings one of the best mobile phone cameras to Android. Read about how to use it to its full potential.
Published 17 May 2015, 00:47 EDT

Two years ago, we were very impressed with the Nokia Lumia 1020’s manual photographic controls as you may have seen in our “How to take incredible photos with the Lumia 1020” article. Now we’ve got the new LG G4 boasting improved photography capabilities as well as RAW imaging support on the Android side of things and it’s pretty exciting. Can it replace a professional digital camera? We’ll find out, but keep in mind that all cameras have limitations and what really allows you to take great photos is understanding those limitations and learning how to generate imagery that communicates emotion despite those limitations.

Even if all you’re going to do is turn on the RAW DNG photo file format, switch to manual. The JPGs are heavily processed in the phone and you’re not going to want that. Well, if you do, you’ll also get those same JPGs in the JPG/DNG mode, but you’ll also get the much-more-flexible RAW DNG files which you can edit with far greater flexibility in image editing software like Adobe Camera RAW and Adobe Lightroom. (Unfortunately Capture One Pro does not open the LG G4’s DNG RAW files.) Yes, there are a handful of DNG editors that you might be able to install on the phone itself, but they’re all pretty horrible when compared to the professional software you can use on a desktop (or Windows-based tablet like the Surface Pro.)

Learn about the manual controls

DNG helps a lot for post processing images in the future, but the other manual controls are good for getting things right before you take the photo too, unless you press the wrong button and forget to change it before the next shot. The LG G4 remembers your manual settings between camera launches, so you better check them before you take a shot. This is especially problematic when using the camera shortcut button. Double pressing the volume down button on the back will automatically launch the camera, show the viewfinder for about 2 seconds and then take a picture. It will use the last settings you used, so if you’re in a completely different scenario, it will probably take a picture with the wrong settings. It also remembers whether you used the front-facing camera or the rear-facing camera last so if you were hoping to catch a quick action shot by double pressing that volume down key, often it may be taking a picture of you instead. 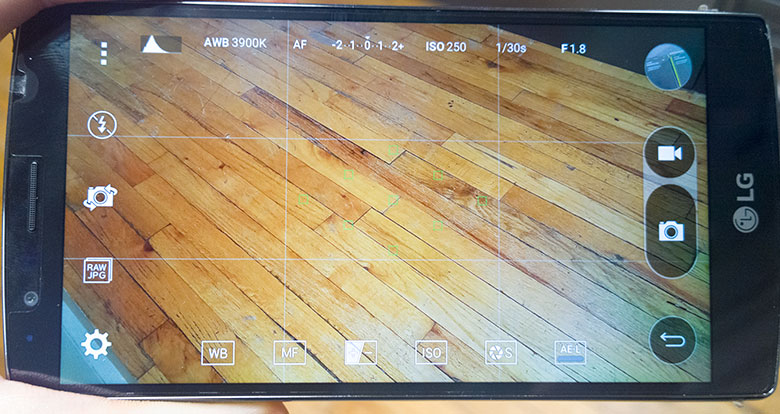 The LG G4 has manual control buttons all over the place. It turns out that the ones at the top are not actually buttons though. Those are just status indicators. One would think you could tap the ISO value to change it, but really you have to go to the opposite side of the screen to tap the ISO BUTTON which then will bring up the ISO slider interface.  In the sunshine icon at the bottom left, you’ll find a handful of settings that you can change including turning on voice activated shutter, a grid overlay or horizon overlay, timer, and histogram display.  In the above, you can see the histogram display in the upper left. What this does is show you the range of values currently in your viewfinder from white to black.  The idea is to get a good range without clipping highlights or shadows. 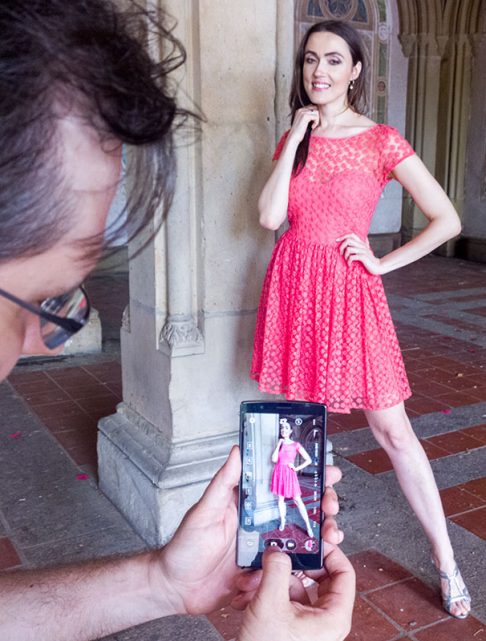 Along the bottom are the manual controls which all show their results in real time in the viewfinder.  White balance changes the color temperature values in the image. Often different lighting conditions cause different color variations and you can use this to compensate for that. The MF button allows you to manually change the focus distance.  The +/- button allows you to change the exposure compensation levels without having to change your shutter speed or ISO.  The ISO button changes the sensitivity of the sensor.  A higher number means the sensor will try to absorb light more quickly, but this means there will be more noise and mistakes in the image capture.  The S button gives you a shutter speed slider that can go as slow as 30 seconds.  If you’re holding the phone in your hands though, you don’t want to make this much slower than 1/15th of a second. The optical image stabilization starts having issues keeping the lens steady after maybe 1/4 second depending how steady your hands are. You can mitigate this somewhat by holding the phone against a stationary object like a telephone post or wall.

The AE-L button is the auto-exposure locking button.  If you have certain exposure settings set on auto, pressing this will lock them to their current values. This is useful if you’re shooting a lot of photos in the same lighting conditions and you want to keep the settings locked in place the whole time, but often I’ve noticed this gets activated accidentally and I’ll end up shooting one or two photos with a completely wrong white balance or exposure setting.

By the way, while you would think Manual mode would have the most options in the LG G4’s camera software, it’s actually missing panorama mode, dual shot mode, and burst shot capabilities which are only available in Auto mode. You have to switch to auto mode and hold down the shutter button in order to activate burst shot mode (which takes a series of quick photos while you hold the button down). The camera software is also missing high dynamic range specialty shot mode and auto bracketing (which is great for making custom high dynamic range images).

Do not use the flash

Like many smartphone cameras, the LG G4 has a dual LED flash. Long story, short… turn it off. LED flashes are notoriously bad. The range is very short, they don’t have much power, they mess up the color, and they’re just not bright enough to freeze action. The LG G4 is no exception. If you really want a phone that has some power to modify lighting conditions, you’ll need at least a Xenon flash. Sure, the LED flash might give you some light, but you’re much better off finding your lighting sources elsewhere… and great light is something you want to keep your eye out for. In fact, the range of the LED flash is so short, I kind of wish they would put it on the front-facing camera since it’s really only remotely decent with arm’s length selfie photos.

The LG G4 has some nice and fast laser-assisted focusing, but it doesn’t always focus on the right thing. The focus point usually defaults within the center of the frame probably because that’s the only place where the laser-assisted focus points are located, but that’s hardly ever where I’m going to put the subject. There’s no face detection either, so that makes choosing the proper focus point even more important.

The LG G4 has a 16:9 ratio sensor. You have to shoot in that mode in order to capture the full 16 megapixels of image data. However, that 16:9 sensor ratio size pushes a large portion of the image into the bad area of the lens. You’ll notice distortions as well as a huge amount of light fall-off on the edges of the frame. This is somewhat corrected in the LG G4’s processed JPGs, but it’s not done as well as you could do it in a more professional grade RAW imaging program. In Adobe Camera RAW, I have to apply significant adjustments to correct for these lens problems. Cropping helps alleviate those issues, but of course you’re going to be losing a lot of the image’s resolution.

Close-up macro photos are always fun and it’s the best way to create a narrower depth of field with that f1.8 wider aperture. Of course you’re not going to get as narrow a depth of field with the LG G4’s f1.8 aperture as you would with a full frame digital camera since the LG G4’s sensor is much much smaller than that. Still, the G4’s bokeh really shines when you can get closer to the subject and increase the distance of the background.

The LG G4 has plenty of noise in the RAW files. The JPGs it creates try to fix it, and doesn’t do a very good job in my opinion (but it might be good enough for others). 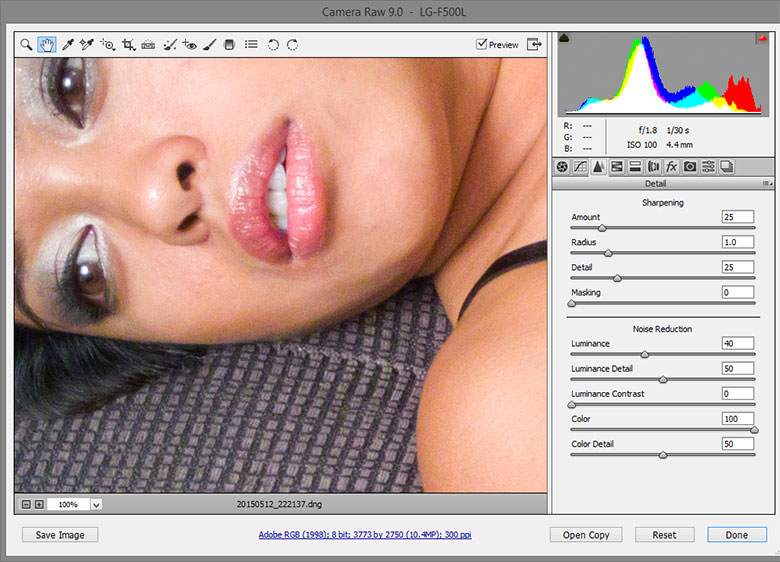 The color noise can mostly be fixed by cranking the color noise reduction in Adobe Camera RAW up to 100. You can see in the above that it doesn’t quite get rid of all the color noise in all cases as there are still some yellow splotches, but it does okay for the most part.  I find that to fix the light falloff issue, turning the vignetting slider up to 40 and the midpoint slider down to 0 in the Lens Vignetting section works pretty good. I also set the lens distortion slider to -6, but really I should generate a proper lens correction profile.

Turn off the selfie filter

While selfies don’t really count as “great” pictures, you know they’re super popular right now. The LG G4 defaults to having some sort of “beautification” filter applied to the images it takes with the front facing camera. This filters the skin areas and smooths everything out so that it looks really unrealistic. 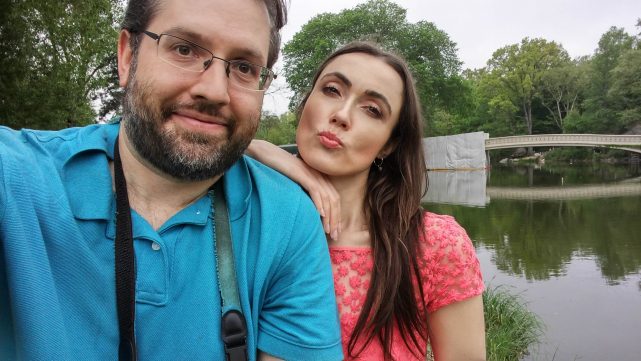 As we’ve said before, taking really great photos is all about communicating feelings and emotions. That’s possible with any kind of camera if you’ve got the conditions and scenario, but finding those conditions and understanding the limits and capabilities of your camera is what’s important. The LG G4 certainly has its limitations, but it also has a lot more flexibility and capabilities than many other smartphones on the market today.

Thanks to our models; Liga Freimane and Kimber Matias

Confused between the Galaxy S21 and Galaxy S21+? Here’s a breakdown of their specs to assess how they differ from each other.