The Go Puck battery is a wearable battery pack with a great look and feel. Check out our impressions in our Go Puck battery review.
Published 04 February 2016, 10:00 EST

There is something that seems…silly…when you talk about a concept like a wearable battery pack. Why would someone need…no. Why would someone want to wear a battery pack? Now keep in mind, this is coming from someone who wears a belt pouch every day and who used to keep his smartphone in a holster, also on a belt. Doesn’t a battery pack seem like the next logical step? So when we first picked up the GO PUCK power pack, we were a bit dubious at first. It certainly was an interesting concept. But we needed to try it in the real world. So we did, and we’ll talk how it works, but for now, let’s look at the device itself.

Not just a pretty face

The GO PUCK is probably one of the most attractive battery packs we’ve used. Our unit looks like a square, reverse oreo cookie – white on top and bottom and black in the middle. The entire unit is covered by a comfortable soft touch material that makes it very comfortable to hold. The GO PUCK has very prominent branding on the top, along with a green LED bar to indicate the amount of charge left.

Speaking of amount of charge left, the GO PUCK comes in two varieties – the GO PUCK 3X with 4,400 mAh and the version we tested, the GO PUCK 5x with 6,600 mAh. Both varieties have 2 USB ports that will charge 2.1 amps and 1 amp. Both varieties also sport the claim of “Rapid charging”. A test with a Samsung GS6 edge had the battery charging at about 1% per hour. Not sure that is our definition of “rapid”, but perhaps it’s faster than some. Moving on, the corner to the left of the USB ports has the power button and the bottom has a bit more branding. Along with the GO PUCK charger comes the Active Mount which is where the term “wearable power” gets its name. 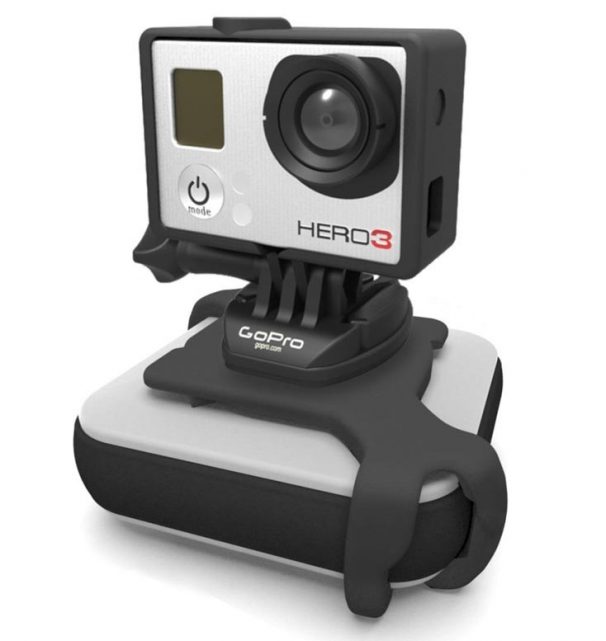 On the one hand, you do have to use an accessory to make the GO PUCK truly “wearable”. But, every GO PUCK comes with this accessory (more are available for $19.99), so the GO PUCK backs up its claim out of the box, unlike some laptop-killing tablets we won’t mention here. The Active Mount serves a few different purposes. It comes with a screw mount that allows you to attach a camera (or GoPro – get it? GO PUCK for the GoPro). Plus, the Active Mount has enough room for you to insert your belt, backpack strap, armband or any other kind of strap to secure the GO PUCK to that item.

This is where “wearable power” comes into play. At first, we didn’t think much of the concept, but using it actually is rather handy. When you think about it, it’s one less thing that you have to carry in a pocket or a backpack. When you need to plug in, you don’t have to figure out which pocket the battery goes in, and which the phone goes it. Like other wearable tech, it’s there when you need it, and unobtrusive when you don’t. It does add a bit of weight to your belt, or in our case backpack, but it’s not so much as to be noticeable. 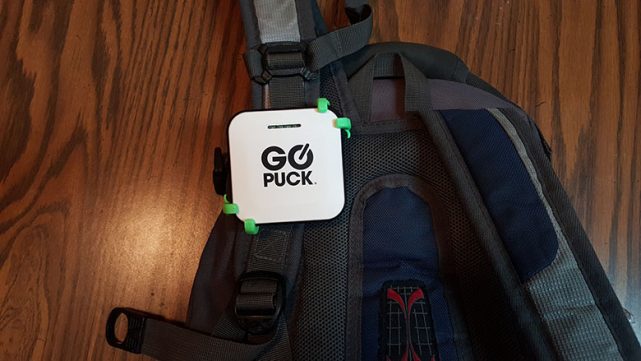 We were relieved to find that the GO PUCK is water resistant. During a rare, February Chicago rainstorm, we realized that with the GO PUCK on a backpack and with the branding oriented correctly, both USB ports and the MicroUSB charging port faced straight up, like three tiny cups just ready to easily accept an errant raindrop. Fortunately, there was no damage done and the GO PUCK is still charging like a pro.

At 6,600 mAh, the battery capacity is not the greatest. It’ll charge your iPhone three times, or in our case the Galaxy S6 Edge almost constantly because it has to. But honestly, any higher capacity, and the battery pack would likely become too unwieldy to be considered a viable wearable device. We would probably recommend the 4,400mAh over the 6,600mAh unit because of that weight. Realistically, the 4,400mAh unit will need to be charged more frequently, but the weight trade off would be worth it. If we had ordered this for personal use, we would have ordered the 6,600mAh unit because, bigger is always better of course, but in retrospect, if we were to recommend this, 4,400mah is probably enough for the average user, especially considering the “wearable” part. Don’t misunderstand, our unit is just fine, but we wouldn’t mind shaving off a few grams. 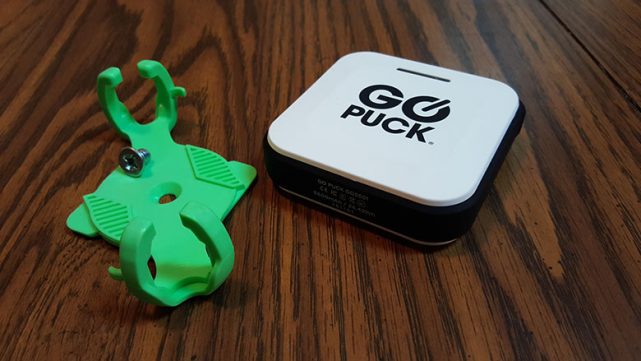 You can order one for yourself off of GO PUCK’s website. The GO PUCK 3x retails for $59.99 and the 5x is $79.99. Both of these prices are a bit on the high side, considering comparable products. If you are into the style and accessibility of a good looking wearable charger, then the price is about right. If you don’t care and just want a giant plastic monster to hide in your backpack, then there are definitely better deals out there.

Overall, the concept of wearable power is a neat one. We enjoyed it far more than we thought we might. It’s one less thing that you have to dig in your bag for and it’s always there when you need it. So if you’re in the market for a battery pack, and you want to try something a little different, your next piece of wearable tech might just be your battery.

These are likely to lack wireless charging support.