With the Nexus 10, Google Looks to Turn Mobile Upside-Down — Again

Google is changing the rules with its Nexus 10 tablet, betting that “if they built it, developers will come.” Read on to see what we think of the company’s chances.

Last week, I shared some thoughts on who I thought Google’s Nexus 10 tablet was for. The new device, a sleek plastic affair with Android 4.2 and a beautiful display, rolls out November 13th, and despite my best efforts, I’m not sure I ever properly answered the question of who would be most likely to lay down some hard-earned cash on release day.

Our own Jaime Rivera made some excellent points both for and against the new tablet yesterday, calling it “both ugly and hard to resist.” While I disagree on the former point -as I mentioned on last week’s episode of the Pocketnow Weekly, the device reminds me of the gently-curved, futuristic PADDs from Star Trek: Voyager– looks are subjective … and beside the point.

Because whether or not you like the bulging edges and plastic casing of the Nexus 10, the device certainly hasn’t been beaten hard enough with the ugly stick to impede its sales. From the few hands-on accounts we’ve read, it reportedly feels great in the hand, and its screen is so good it might make your head explode. [citation needed]

But as I mentioned in the above-linked piece from last week, that’s not enough when you’re running Android on a ten-inch tablet. Say what you will about Apple’s iOS, it still packs a tablet app selection that absolutely destroys every other platform. That’s a problem Google’s been struggling with for a long time, and it’s one we’ve written about so often that I’ve got a cheat-sheet with the URLs to those old stories for quick linking.

It’s a problem I think should have been fixed with the Nexus 7. The smaller tablet may still be my new best friend, but I think it represents a missed opportunity for Google to spur developers to build tablet apps for Android. During Apple’s iPad Mini unveiling, Phil Schiller employed juxtaposition to great effect, pitting the new pint-sized iPad up against the Nexus 7 and demoing a series of apps via screenshot. Standing alone, phone apps scale well to the Nexus 7’s screen, but alongside custom iOS apps built for the tablet form factor, there’s just no comparison. Aesthetically and practically, iOS wins every time.

Google generated a lot of buzz with the Nexus 7 due to a number of factors –enough to move almost three million of them to date– but failed to transmute that buzz into tangible benefits in terms of the tablet ecosystem. The impending Nexus 10 launch promises to throw the barren Android tablet app landscape into even starker relief.

Yet Google execs were (predictably) positive about the Nexus 10’s prospects in a recent interview with The Verge‘s Joshua Topolsky, with Matias Duarte saying “One of the reasons I feel confident about Nexus 10 delivering a tremendous amount of value out the gate is because already since we launched Nexus 7, we’ve seen so many more apps responsive to screen sizes across all form factors.” He then shifted topics to the new content available in the Google Play store, which we’ve said a few times is a good selling point for Android tablets.

But Duarte mentioned no specific title to support his claim that there are “so many more” apps out there today that scale better to tablets. More interesting, to me, was director of product management Hugo Barra’s statement that “part of the reason why we’ve invested significantly in building [the Nexus 10] is exactly so that we have more and more motivation for the developer community.”

With that statement, Google looks to be trying to turn the chicken-or-egg app-ecosystem question upside-down.

It’s a bit of a long shot when you consider just how long Google’s been effectively app-less in the tablet sense, especially compared to the first iPad, which built up a massive app ecosystem very shortly after its release. But that accomplishment took a huge amount of investment and effort on Apple’s part, and the fact that it happened in such a short time must be considered an exception, not the new normal. For proof, look no further than Windows Phone, which took 20 months to reach the 100,000-app mark despite being heavily pushed by the massive Microsoft. The platform suffered due to the slow growth, but it survived because its parent had a strong interest in keeping it afloat. So will be the case with Android on tablets. 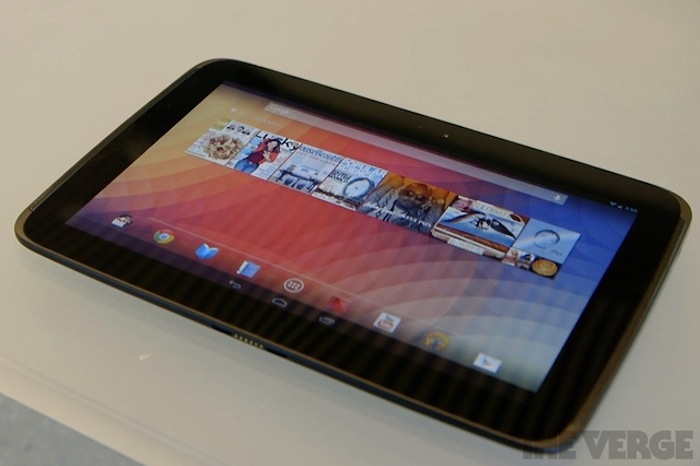 Back to the triad of attributes that will drive developer investment. The Nexus 10 will ship with a 2560-by-1600, 306-ppi display powered by an Exynos 5 CPU running Android 4.2, boasting “advanced MIMO WiFi.” That’s a lot of features, and tells a solid story of power. Where the Nexus 7 skimped on capability in favor of lower price, the Nexus 10 brings a feature set that’s headline-grabbing all on its own. That’s the first plus.

But the Nexus 10’s price doesn’t shoot into the stratosphere in exchange for those features, either. Google seems perfectly happy to slim the margins on its physical products in exchange for getting more users’ eyeballs in front of its services. Keeping in line with its low Nexus 4 pricing, the company is starting the Nexus 10 at $399. It’s not the cheapest ten-inch tablet on the block, but as Jaime Rivera says, “it’s a Buick, priced like a Hyundai.” That’s plus number two.

Finally, Google isn’t keeping quiet. The new suite of Nexus products might be missing a few things, but it’s not a portfolio of beta devices, nor is it restricted to the world of developers. The Nexus 7 gave Android a new wave of buzz to exploit, and Google is riding that wave adroitly, leaving humble modesty to fade into the distance in the rear-view mirror. One needs only look at the bevy of boastful descriptors in the company’s ad copy to confirm this: google.com/nexus is flooded with words like “powerful,” “dazzling,” “awesome,” and “phenomenal.” It seems the folks at Mountain View have decided that Cupertino shouldn’t have a monopoly on hyperbole. That makes for a very bombastic third and final plus.

Whether Google will be successful in this attempt is yet to be seen; we’re still two weeks away from the Nexus 10’s debut. But the company has turned the mobile world upside-down before, most notably and successfully when it eschewed the familiar licensing model and gave Android away to OEMs for free, even paying some carriers to adopt phones running the platform. The result was one of the biggest success stories in technology. So I’d say that if anyone can rewrite the rules enough to carve a new segment into the tablet landscape, it’s Google. And with the Nexus 10, it seems pretty clear that that’s just what the company is going to attempt.