Read how the latest Android build is shaping up to be a powerful tool in the ongoing battle of Google vs carriers in the US.

Wireless carriers have a great thing going for them. We all need their services if we want to get online with our smartphones outside the WiFi-shrouded comforts of our homes and offices, and so we pay through the nose each month in order to access a sliver of the RF spectrum (which is already a publicly owned good, but that’s another rant). The sheer amount of power they’ve been able to wield as a result has been nothing short of detrimental to the mobile industry, as I’ve recently written about at some length.

But there’s hope! Over the past week, we’ve seen Android 4.4 go official, and have been learning more and more about its capabilities. While there’s lots to look forward to trying out, a couple of those features have really been standing out to me as steps that (slowly) are wrestling some of this power out of the hands of these ill-deserving companies.

First up, and easily the one I’m most excited about, is the “host card emulation” present in the new KitKat APIs. What the heck does all that even mean? 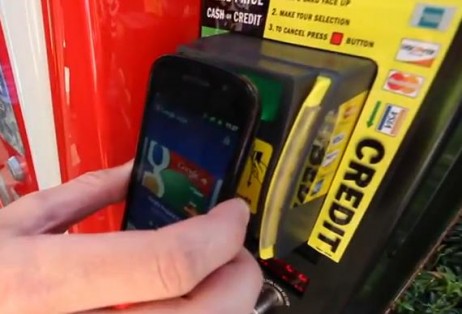 Put simply: this is the ace in the hole Google Wallet has needed all along. If you’ve picked up a phone in the past that had NFC support, yet couldn’t make mobile payments with it, that host card business is the reason why. See, the way Wallet has been running so far, there was a “secure element” as part of the NFC chipset which communicated with retail systems and stored your card data. This is just like the chip that might already be in a physical credit card you own that lets you wirelessly tap-and-pay.

Problem was, once carriers got their hands on a phone’s firmware, they were able to block Google’s access to that secure element, killing-off any ability to make Wallet payments. For a while, this seemed like a non-starter, but then right before Android 4.4 went official, we heard the rumor that Google was switching to a software-based emulation system that totally side-stepped any carrier interference – a change that was later confirmed.

Could carriers still find a way to block you from Google Wallet? Probably, as they’re a resourceful, sneaky bunch, but it’s not going to be as easy as simply putting up a roadblock in front of that secure element. And it’s likely that any such efforts would need to be a lot more deliberate and, correspondingly, public and open to criticism; it’s not like Verizon will be able to play coy and act all surprised, “it’s not OUR fault that Google doesn’t have access to the secure element…”

Maybe I’m getting ahead of myself – I’ll breathe a lot easier once we see an Android 4.4 update arrive for something like the Verizon Galaxy S 4 and Wallet works without rooting and other hacky business. But from what I understand of the technical changes behind the scenes, this should very well be possible, so long as Google doesn’t choke at the last minute and censor Play Store access to the Wallet app based on carrier.

Breaking the carrier stranglehold on wireless payments is just one of the ways KitKat is empowering Android to shake things up for network providers. I think it’s also important to look at the changes to SMS handling. 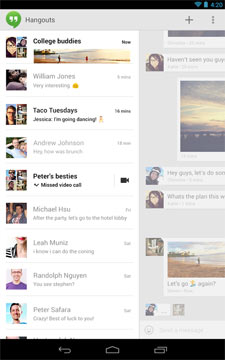 Gone is the stand-alone Messaging app for texting, and as Google implements its ongoing strategy to affiliate everything under the sun with Google+, SMS is now bundled up into Hangouts by default.

For as long as they’ve existed, text messages have been a cash cow for carriers. They cost essentially nothing to transmit, making them nearly pure profit. And don’t think for a moment that just because you’re on a plan that gives you unlimited texts that you’re getting them for free; even when that cost is baked-in to the rest of your bill, you’re still shelling out month after month for a service that a more honest carrier would offer its users for free.

Now, we’ve already been seeing a decline in the popularity of text messaging as other forms of communication usurp its role in our lives: whether those take the form of Facebook messages or Twitter, many of us are at least augmenting our SMS usage with other systems, if not replacing it entirely.

And that’s why this change is so interesting: it places SMS squarely on the same level as all these other communication tools, rather than being walled-off and getting special treatment. Google doesn’t want us as thinking about text messages as things that are intimately connected to our phones – instead, by wrapping them up in Hangouts, they’re just another way to reach our friends. That makes it a heck of a lot easier to start transitioning users to truly device-agnostic forms of communication, and break this archaic reliance we still have on SMS.

Both these changes are substantial, in my opinion, but I really hope we’re just getting started. Either by creating work-arounds or just offering us new alternatives, I’d love to see Google keep knocking carriers down a peg or two. KitKat seems to be a great start, but there’s a lot of potential for where to go from here, and I’m curious to see just how Google might follow through.