The current state of Google Voice

Google Voice is a service that started life under the name “GrandCentral” back in 2005. It was purchased by Google in 2007 and would later become what we now know as Google Voice in 2009.

For those who may not know, GrandCentral was introduced to solve a singular problem that was becoming more relevant in the technological age: how to call someone. I know, it sounds silly, right? Just just pick up the phone and dial.

Ah yes, but what number do you call? During the day, you’ll be able to reach me at my desk job — unless I’m at lunch or in a meeting. Around 6pm you’ll have to call me on my cellular phone. I’m home after 7pm, so you’ll probably want to reach me at that number.  But what if you called and left a message at one of those three numbers, and I didn’t answer. You probably left a message, right? So now I’ve got three voicemail boxes to check to hunt down your message. Or messages. Did you leave three?

GrandCentral wanted to solve those problems. It did so in two ways. First of all, you got a new number, which would ring all your lines at one, and route the call to whichever line picked up first. Second, it provided a universal inbox which would receive all of your voice messages. I was one of the original GrandCentral customers, and it worked wonderfully well! When Google acquired the company, it only got better. Text message support was expanded. Spam filtering was added. Custom calling groups with rules that you could configure made my life much less stressful! Eventually Google acquired Gizmo5, a VoIP company, and Google Voice began expanding. 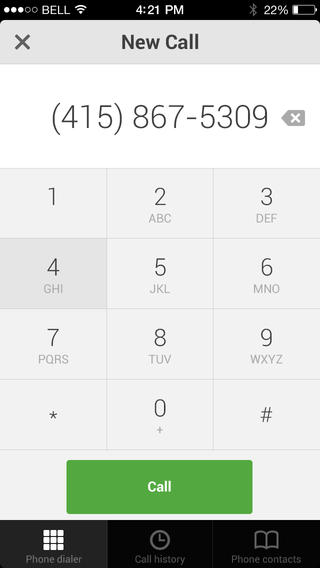 In addition to all that, today users can receive calls, send and receive text messages, receive MMS from Sprint and T-Mobile users, and even make outgoing calls — sort of.

The Holy Grail of Google Voice has always been true VoIP integration, allowing you to make phone calls using data only, without using the voice side of your plan. According to Google’s Nikhyl Singhal, “Hangouts is designed to be the future of Google Voice, and making/receiving phone calls is just the beginning. Future versions of Hangouts will integrate Google Voice more seamlessly.”

Today, you can make and receive phone calls using Google’s services from your computer or laptop, but not from your Android. Interestingly, Google recently updated its Hangouts app for iOS to include some of this functionality.

The framework appears to be in place for Google Voice to become what we’d hoped it would from the very beginning: a true, VoIP-based replacement for our many telephone lines. What I don’t think anyone saw coming was the rise of Google Hangouts, and how it will ultimately replace Google voice.

Hangouts currently works to make and receive voice and video calls over the Internet, and even chat and text messaging. MMS, voicemail, and calls to/from landlines would appear to be the only missing components to make Hangouts your one-stop shop for any kind of communication to or from your smartphone.

Hopefully that day will come sooner than later.

Google Voice is nothing new, in fact we’ve been covering its progress since the very early days of its existence. Read about how Sprint was the first carrier to go “all in” with Google Voice, the perils of porting your number, and whether or not VoIP is the future of how we’ll communicate on our phones. If you’re more interested in the hilarious missteps Google Voice has had along the way, we’ve got you covered there, too!