While the benchmark information is hardly surprising or even very interesting, it’s nice to see evidence of Google ‘taimen’, aka Pixel 2 XXL, testing.

We might be just a few days away from a developer conference set to bring forth plenty of new details on the next version of Android, as well as a few months away from the announcement and launch of the world’s first O-powered smartphones, but Google isn’t Apple or Samsung.

We don’t mean that in a good or bad way necessarily. These companies are simply different, as future iPhones and Galaxy flagships always reveal many of their secrets early on, while Nexuses back in the day and now Pixels tend to keep the mystery alive longer.

Basically, all we know so far about the Pixel handheld family’s second generation is that it’s made up of three models carrying fish-related codenames. The “Walleye”, “Muskie” and “Taimen” should pack Snapdragon 835 processing power, according to credible inside information, and obviously run Android O out the box. 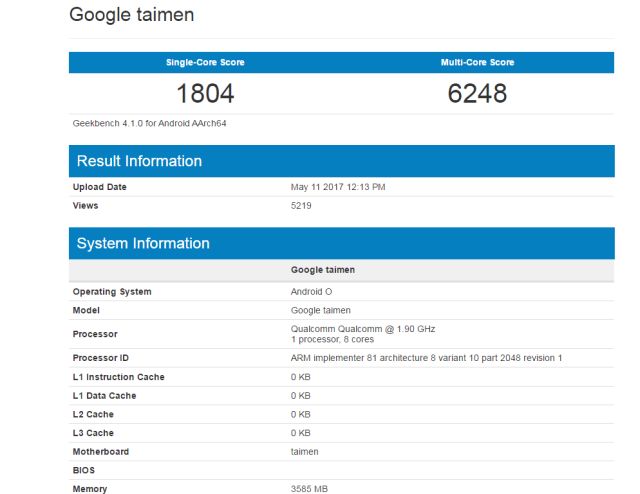 Rumor has it Walleye designates the more compact Pixel 2 variant, following in the 5-incher original’s footsteps, with Muskie sporting an “XL” screen, and Taimen possibly being an XXL affair. We can’t confirm any of that yet, but it appears the third configuration is indeed in relatively advanced pre-release testing, as proven by a public Geekbench record.

The “Google taimen” prototype benchmarked this very Thursday, May 11, already runs Android O, further featuring 4GB RAM (around 3.5 user-accessible), and an octa-core Qualcomm processor with a quad CPU cluster clocked at 1.9GHz. And there’s your Snapdragon 835 confirmation. Alas, everything else remains under wraps.