Google appears to be probing an experimental variant of its highly anticipated Project Ara modular smartphone, though benchmarked data isn’t to be trusted.
Published 05 February 2016, 07:09 EST

While there have been numerous so-called modular smartphones announced in the past six to nine months, the vast majority of which sought crowdfunding for R&D or production, the initiative that started this trend remains our most anticipated one. By a landslide.

Now, obviously, Google has all the money needed to turn Project Ara into reality, but it takes time and many, many resources to develop the perfect device that will allow you to easily replace its components as you go along.

The good news is at least one Ara prototype, model number A8A01, seems to be in testing, with both GFX Bench and Geekbench listing it in their not-so-confidential databases recently. Unfortunately, little of the information revealed by the former can be trusted, since the pre-release Android 6.0-running phone is said to sport an outlandish 13.8-inch screen.

That’s more likely 13.8 centimeters, i.e. roughly 5.4 inches, but if it’s indeed erroneously indexed, who knows what else is incorrect? Clearly, the VGA rear camera, and possibly, the two storage options too. 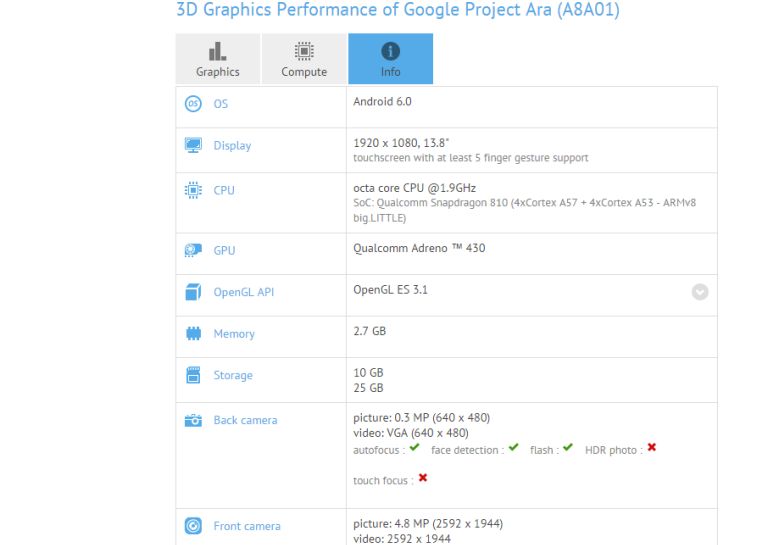 Besides, the whole point of the project is to let the buyer customize their purchases, swapping things like batteries, cameras, ROM and RAM modules by your heart’s desire. What will probably be fixed is the processor, currently an octa-core Snapdragon 810, but destined to change as Google Project Ara evolves. If it evolves, and if these tests are legit, because like it or not, there’s a possibility the program will be dropped before it truly takes off.