This is the Google PixelBook Go, a device that’s fairly interesting for a couple of reasons. See Google created Chrome OS with the idea of giving the world a lightweight and affordable operating system for the masses, and yet, none of Google’s offerings has ever been inexpensive, and some weren’t even that great to begin with.

And this is the part that baffles me about the Google hardware approach. Companies like Amazon are not interested in making money out of the hardware, since their core business is in the services. Google has a very similar business model, and yet every single Chromebook they’ve launched in the past was always about excess. Specs too powerful for ChromeOS, and naturally, prices that went beyond a thousand dollars.

That’s part of the story of why this computer matters. The new PixelBook Go is a more mature solution that intends to just be a really good computer, at a more decent price. The only question now is if its good enough to warrant the fact that it’s still on the higher tier of pricing for a Chromebook. This is our PixelBook Go review.

Last year I really wanted to love the Pixel Slate. I was looking for a good replacement for my iPad Pro, meaning I needed a tablet that had all its benefits, and the added value of the full browser that the iPad was missing at the time. Boy was that a disappointment, so much so that, I ended up going back to my old PixelBook from 2017.

Thing is, I still believe in the concept of ChromeOS. Some people don’t need a full-blown computer, but they do need a full-blown browser that’s more powerful than Safari on iPadOS 13. Even if the PixelBook Go doesn’t intend to be a tablet I’m dying to have, it’s gotten so many things right as a laptop that it’s slowly become a product I’ve enjoyed using for the last week.

Let me start our PixelBook Go review with the things I like, and it begins with the hardware. 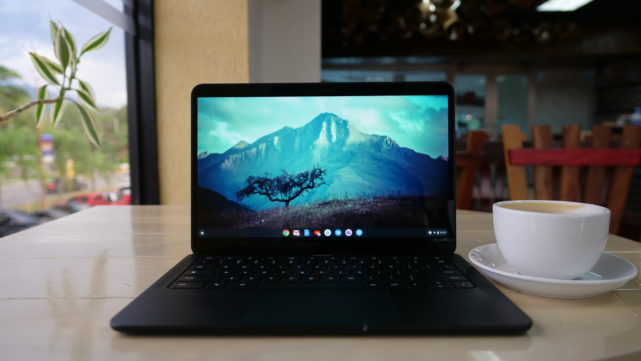 The unboxing experience was rather great, but disclaimer, the care package we got from google is not what you’re going to receive if you buy. The box was large, and we were greeted by lots of colors in the external covers of the outer box signaling to Google’s latest arts for their Pixel campaign. Inside we have a new sleeve and backpack from Belroy which are specifically designed for PixelBook Go. You can purchase these at the Google store. Under that we have the retail box for the PixelBook Go with arts at the back that show more of a lifestyle approach to using the product. Tear the plastic, lift the top, and here’s the device.. let’s peel the plastic.. Under it we have a protective cover for the keyboard, and the computer boots instantly. Then we’ve got literature with stickers, and bellow that a USB-C to USB-C cable, and Google’s 45W fast charger 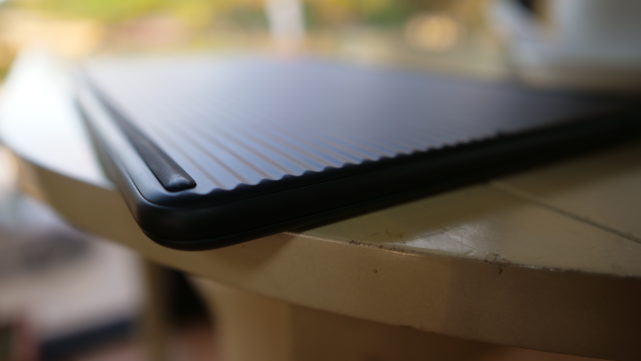 I’m all for the thinnest and lightest laptop you can buy, but sadly those are hard to find for less than $999. This laptop almost feels like if it was designed to compete against the MacBook Air. It’s barely 13mm thin, and weighs only two pounds. To keep it light and sturdy Google shifted from aluminum to painted magnesium which is soft to the touch, and yet doesn’t become a smudge magnet. The ridged bottom makes it more practical to use on your lap, and the lack of sharp curves make it really good to hold as you move it from place to place.

We’ve also got some good options for I/O here, with a USB-C port on each side, and there are cases where it even makes a $3000 MacBook Pro look bad, like in the case of the 2 megapixel 1080p webcam that even supports larger 1.4 microns. 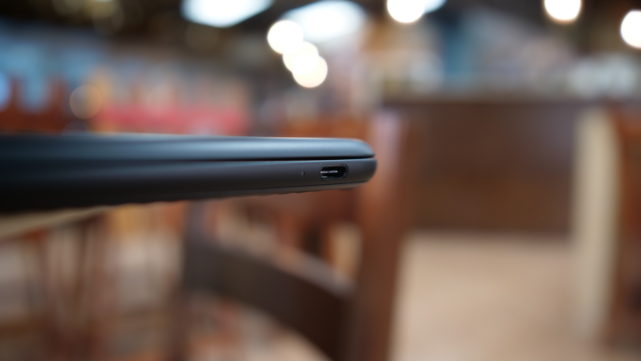 And do yourself a favor and leave the charger at home. Google advertises 12 hours of endurance on a charge, and 2 hours of juice on a quick 20 minute charge, and this is also not just marketing talk. I got around 9 to 10 in my tests, which is still far beyond my experience with any other desktop operating system. The advantage of using ChromeOS is that its hardware requirements are really small. This computer has no noisy fans, no fuss, and regardless of how many tabs I have open, I was able to end a day on a charge just fine. 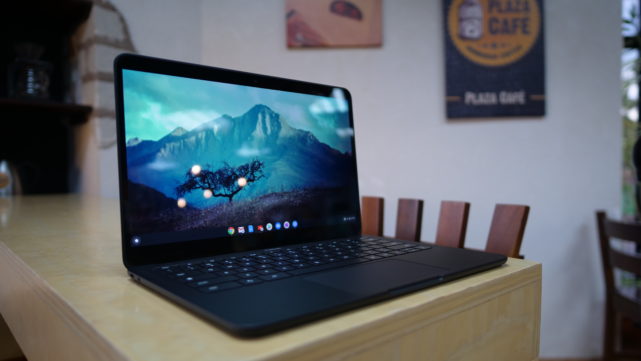 But hold it. Even if I can type a love letter for hours on this device, what we really type are reviews, and I do have to point out the things I wish this product had.

Let’s begin with this display. For me 13.3-inches diagonal and  16:9 aspect ratio on a display actually my favorite, but I do wish I had more resolution. True, at this price range it’s hard to find anything above 1080p if we’d be talking about Windows or MacOS. Since finding a Chromebook for $200 is quite common, this was such a missed opportunity for differentiation through how inexpensive ChromeOS is to operate. The screen isn’t bad, colors are good, but brightness isn’t its best feature. I just wish the screen were as good as the speakers, because these are some of the best ones I’ve heard in this price range. 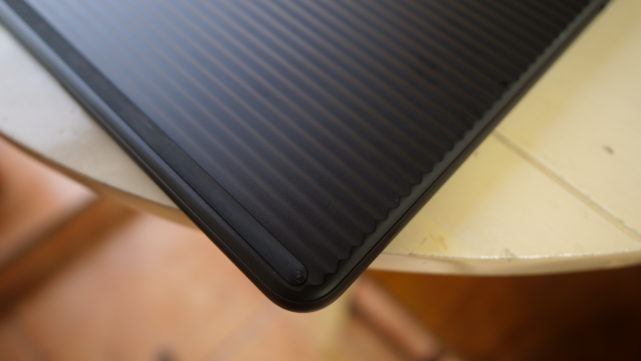 And really one of the main reasons for my argument is because it’s not like if this computer had the latest and greatest specs. Our unit has an 8th generation core i5, so pretty much two generations behind. This is actually the mid-tier model so we do have the 8GB of RAM and 128GB of non-expandable storage, which is fine. Chromebooks aren’t really that storage hungry so I think you might survive. You do have the alternative to get the 4K display and more storage, but the price really doesn’t merit a Chromebook. It just doesn’t.

Now ChromeOS has come far from when I last reviewed it on the Pixel Slate. Google has made some changes that I really needed in order to take this computer seriously for work, but not all has been addressed. On a positive front, virtual desktops are now supported, sort of. Some Chromebooks already have this, but Google still has this an experimental feature that you have to enable manually. Being able to work on multiple desktops helps you feel less crammed when working on multiple things, so this alone is a huge deal for me. 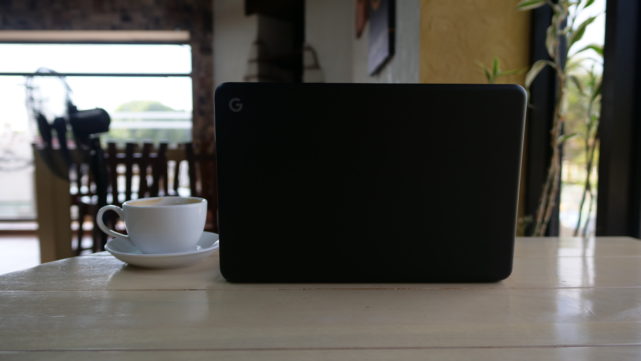 The second is that I feel it far less buggy than in the past. I haven’t really dealt with any of the crashes I got on the Slate. You have the easy convenience of the Google Assistant, which now defaults to text when you press the button for when you need discretion. Everything just feels more balanced.

Why am I mixed? Well, Android apps. They’re here. They’re far more stable, but some continue to fail because they were designed to be used with a phone. Take Telegram for example. Even if there is a hit enter to send message option, well, it doesn’t work. I have to press the send key each time. Everything just feels like if Google needs to be more involved in the implementation of apps on a Chromebook to not let the experience feel cumbersome at times. 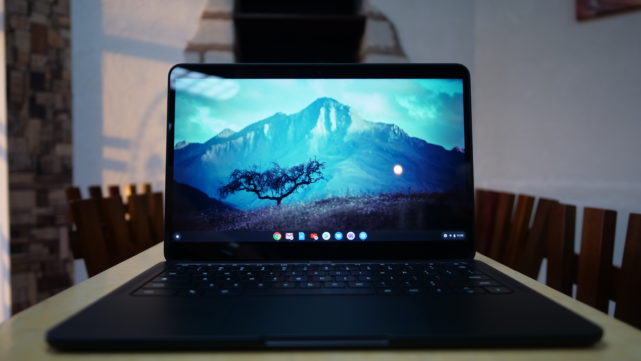 To conclude our PixelBook Go review, notice I don’t have anything I can’t say I don’t like. Like the original Pixelbook which I still adore and use, the PixelBook Go feels like if Google really thought the name out well. We’ve got a very sleek and light design that makes it a joy to carry, battery life that’ll get you through a day of work, and ChromeOS has matured in such a way that I actually want to use this laptop for work.

Really its only problem is Google’s weird approach to pricing hardware. You can get a similar Chromebook from competitors for $200 less, or even more in some cases. And if you’re thinking about trying one out for the Android Apps, make sure you test all the apps you care about before your return period ends, as it can be hit or miss. 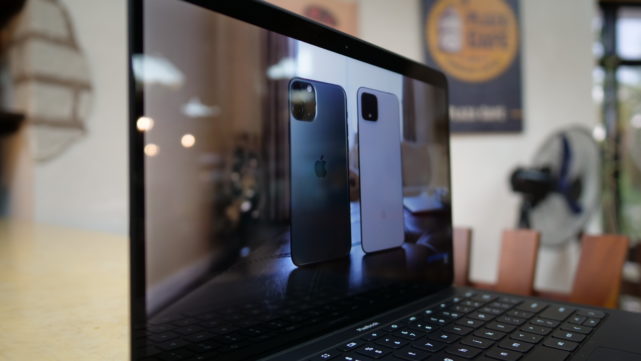 Do I recommend the PixelBook Go? As a product I do. I love using it. As a device I’d recommend over others, not really, and solving the Android app situation would really compel me to consider this over some Windows computers out there.

I’d say: “Google’s PixelBook Go is a joy to own and use. It clicks all the buttons that matter for a laptop just right. It just needs a Chromebook price for this to be the perfect package.”

What about you? What do you think about the Google PixelBook go?

Live Caption on Pixel smartphones only supports English for now and will only work for calls with a single person, and not group calls.

macOS Big Sur introduces one of the biggest redesigns of Apple’s operating system in recent memory, and it is chock-full of new features as well.

Xiaomi assures that all user data generated by Indians is stored on servers located in India and none of it is shared with any party outside the country.
YouTube 1.8M
Facebook 570K
Twitter 197K
Instagram 133K
RSS