Google Pixel Review: Android at its best, on mixed hardware

Learn more about our final impressions of the Google Pixel, as the company tries to re-invent the way Android should be powered
Published 06 December 2016, 11:45 ESTUpdated 07 December 2016, 23:16 EST

Since its inception, the Pixel has always been a high-end brand. From the Chromebook Pixel, to the Pixel C, each iteration served to showcase what Google envisioned as the best hardware to run its software, and as a result, none came for cheap. Many even debate that products like the Chromebook Pixel were more of a showcase than anything, as it’s hard to understand who would pay more than $1000 for a computer that’s powered by an operating system that runs perfectly fine on entry-level specifications.

2016 is when the company draws the line with smartphones. Even though Google pretty-much created the premium mid-range category with the Nexus 4, that legacy that we once adored is sadly no more. Google has decided to take a step forward and not just collaborate with companies in the hardware and software experience, but instead actually take full responsibility for its showcase of what the perfect Android smartphone should be. This has resulted in much polarization, as the cult following that trusted Google with the Nexus has now been relegated. The new Google Pixel is actually far from what we were used to seeing with Nexus smartphones.

Is the Google Pixel a better approach? Read our full review to learn more. 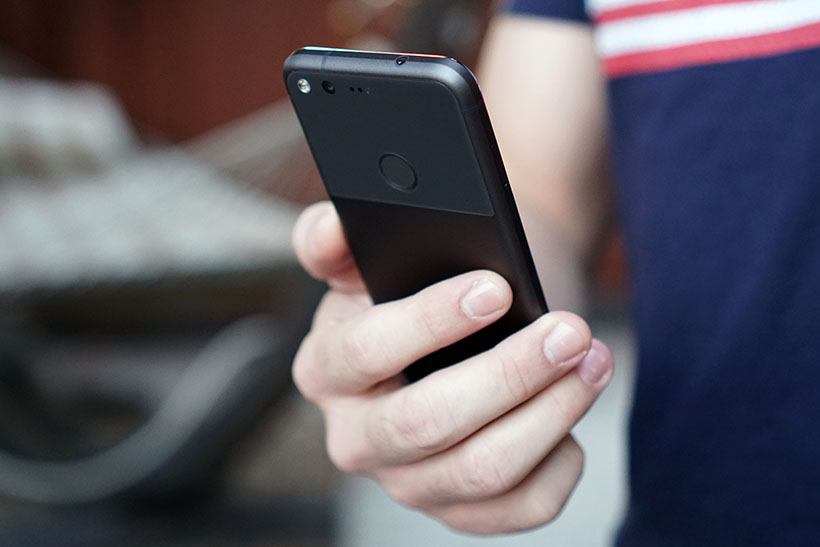 The less important story for a software company I actually one that Google got right to a certain degree. The Google Pixel is manufactured by HTC, and that collaboration is evident at first touch. It’s truly a delight to hold the Google Pixel. This is not just any anodized aluminum, but a thicker texture I’ve never held before. The top is then complemented by a sheet of glass that provides a very unique accent from a distance. 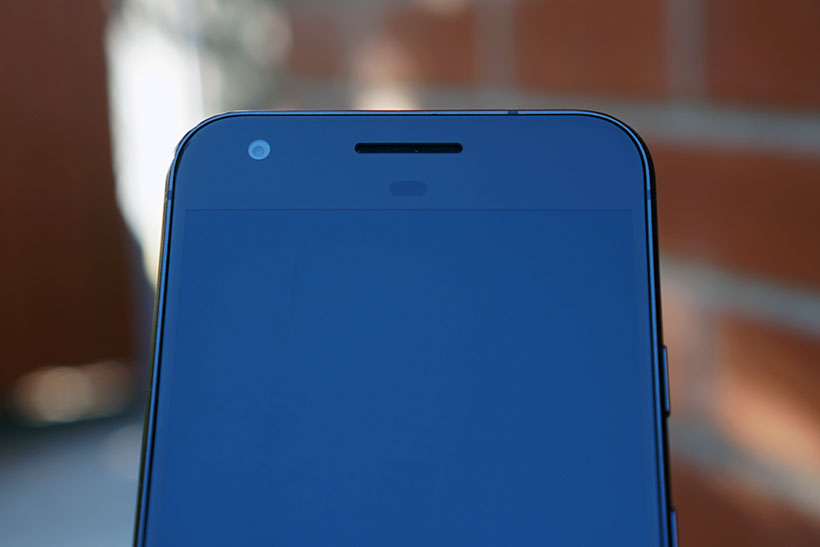 The problem is when you flip this phone around. The delight in this design kind of ends the moment you notice the insane amount of chin in the top and bottom. It actually seems as if there were plans for stereo speakers on this design, and these didn’t make the final product. About the only reason why I don’t complain is because I really like the 5-inch 1080p panel that lies within. Google made a great decision to stick to AMOLED, providing a very immersive experience through deep color. 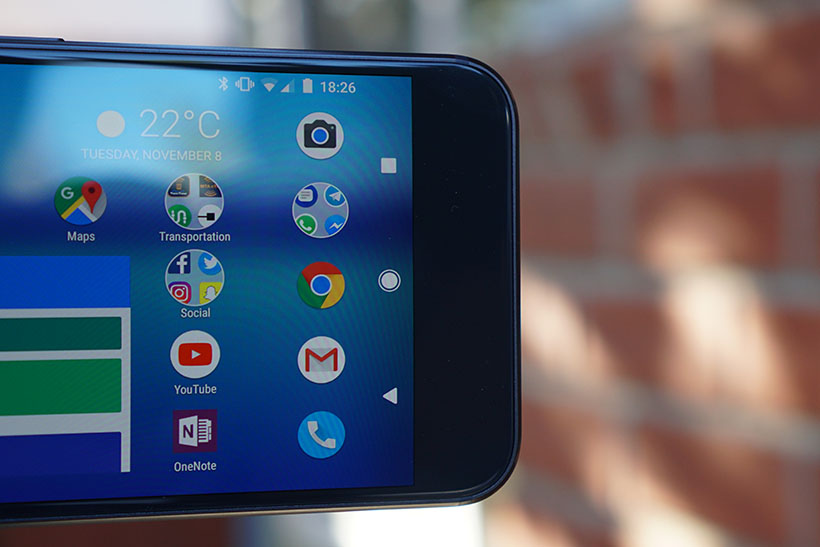 Other great choices power the Pixel. The device holds the latest and greatest Snapdragon 821 processor matched with 4 gigs of RAM and a rather sizable battery considering its footprint. If it wasn’t for the lack of expandable storage, and a higher spec in water resistance from IP53, and the single firing speaker that sometimes clacks with intense audio, this would truly be a close to perfect phone from a hardware perspective. 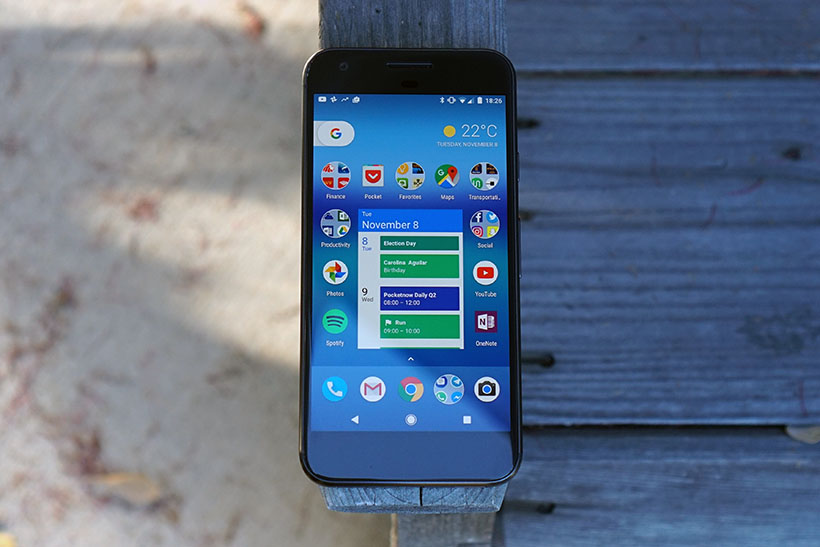 Now even with the mixed hardware, let’s remember, Google is a software company first. As such this device showcases the best that Android has to offer with version 7.1, and boy does Google get a ton of things right here. I have yet to experience lag in absolutely any operation I throw at this phone. From navigating through menus, to running apps in multi-window, to playing the most graphics intensive games, this phone just doesn’t stop surprising me. The best way to describe it is as a delightful experience, as really, all you want is for your phone to do what you’re asking it to do. 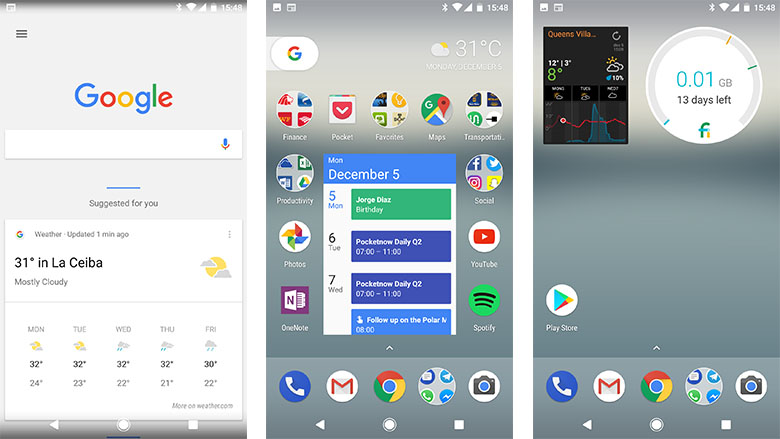 The Pixel launcher also plays a key role here. I’m a big fan of dense grids in the home screen, and this one takes the cake. Want your app tray, just slide from the bottom. Want quick short cuts to toggles, slide once from the navigation bar, want more toggles, just slide second time, want Google Now, just slide from the left. Google has really invested in reducing the time you take in going from A to B, and I really like it. If anything I’d change the weird circular folders, but I wish every company would adopt this launcher going forward. 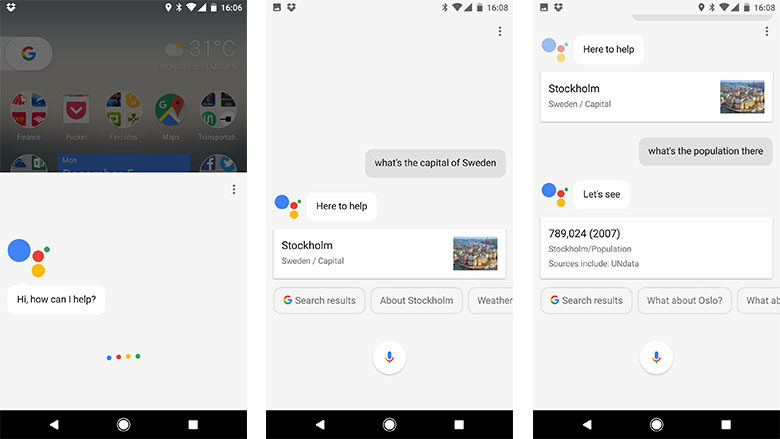 Now the biggest selling point of the Google Pixel is the Google Assistant. Simply say OK Google with the phone on Stand By, or press and hold the home button, and you’re off. The idea is that Google wants to provide you with a tool that helps you access information in a conversational way. Ask it anything you want to get cards or web searches, and then you can continue asking more questions about the topic without the need of phrasing the base elements of the inquiry. This is a really cool idea that has a lot of promise, but as it stands it isn’t perfect. Sure you can ask it to set an alarm or remind you of something, but at the time of this review there is limited to none third party integration, so while you can ask it to find you a good restaurant, it’s still not capable of booking you a table for it. And then there’s the problem that you have to be saying OK Google every single time, so the ideal of a human-like conversation, or of really considering this to be true assistant still needs work. 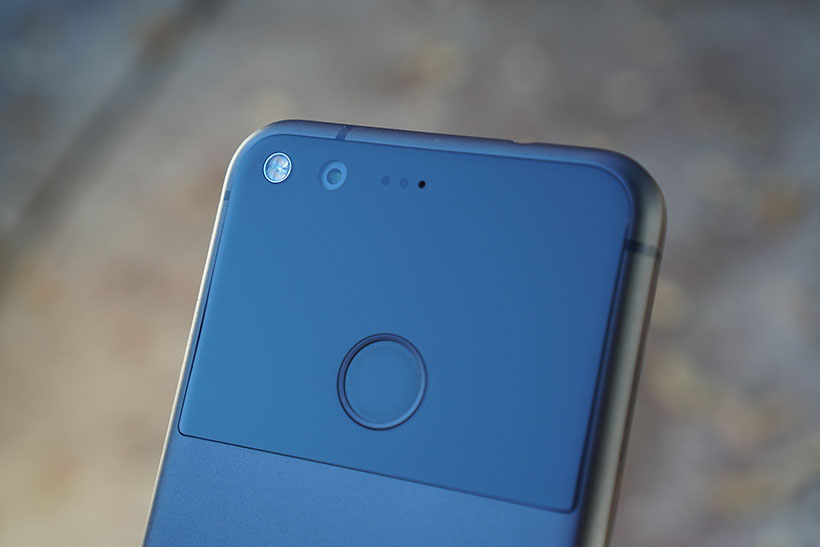 A feature that I really enjoy using with the Google Pixel is its camera. Google claims this to be the best smartphone camera ever made, and even if we don’t fully agree with the claim, it’s a great camera experience none the less. Don’t let the lack of OIS, or the missing sub f2 aperture on the camera lens fool you in thinking this is sub-par camera. Following the legacy of the Nexus 6P, software plays a big role in making this phone delight. Just double tap on that power button to launch the camera, and prepare to be surprised.

Since both the Google Pixel and the Google Pixel XL share the same camera hardware, Juan’s Real Camera Review on the Pixel XL is also applicable for the smaller sibling that I’m reviewing. If you find a few shots with a weird lens flare effect, that’s because at the time of this review Google still hasn’t provided the software update that it claims will fix the issues.

The phone does a great job during the day in both color saturation and contrast, and in most cases it does an admirable job in low light. I also love that you really never know when HDR+ kicks in, as the camera is very fast at taking the shot. And that same experience comes for video recording, where there is this surreal way in which this video stabilizes the video you see through the view finder while you’re recording. It’s as if you’re hovering over the scene, even if the final result doesn’t always look as stable in cases like low light video recording.

The selfie camera isn’t really my favorite when it comes to field of view, but it does a far better job than direct competitors with a fruit logo in the back. 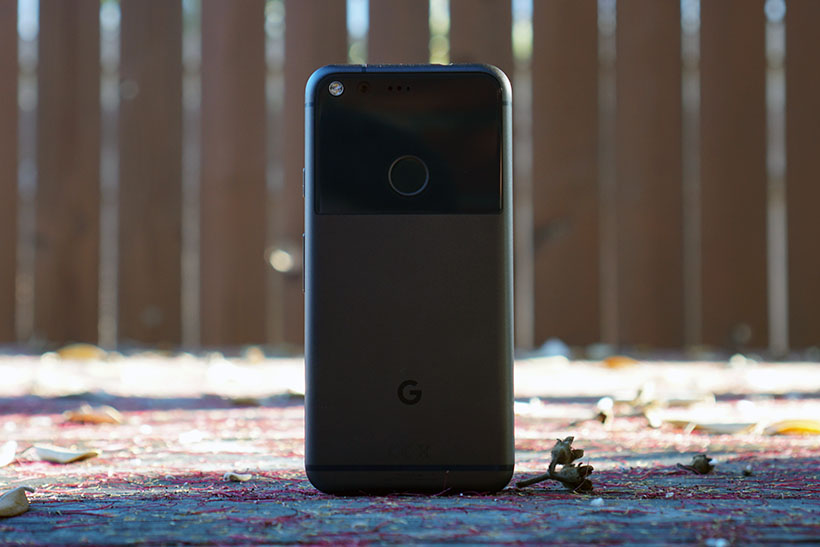 Now as a daily driver, there is a lot to love about this phone. Given the remarkable feel and the fluidity of the software, it’s hard to move away from the Pixel. Many have complained about how aggressive Nougat can be about killing tasks in the background to preserve RAM, but I haven’t found it to be a problem in my review unit. Graphics intense games play well on the Snapdragon 821, and one of the major surprises for me has been in battery life. I’m really surprised at how well this phone lasts through a day, how the battery is almost not affected on standby, and how quickly it charges. 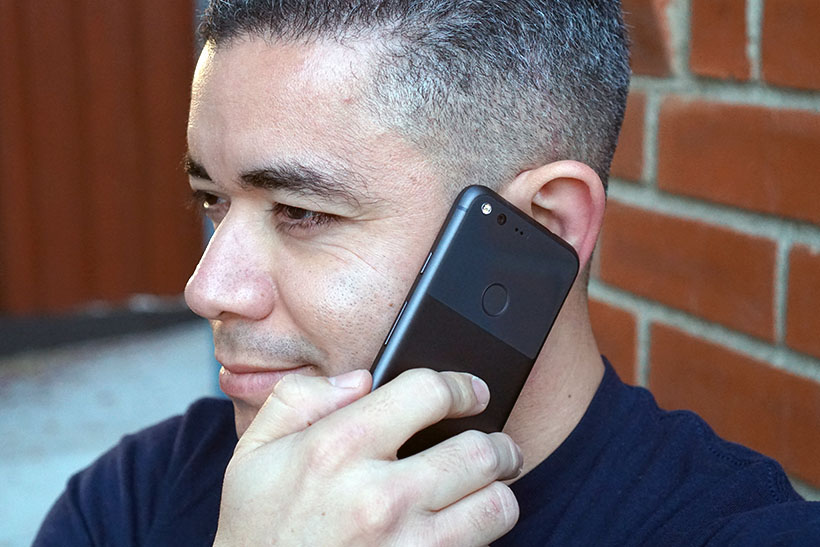 Call quality is great, and I’m a big fan of Project Fi for its affordable rates, dirt cheap roaming fees, and the fact that it relies on three networks. This has allowed the Pixel to excel in both reliability, and also power consumption. For the avid traveler, or someone living in a dense city, Project Fi is the way to go, and you need a Pixel to enjoy it. 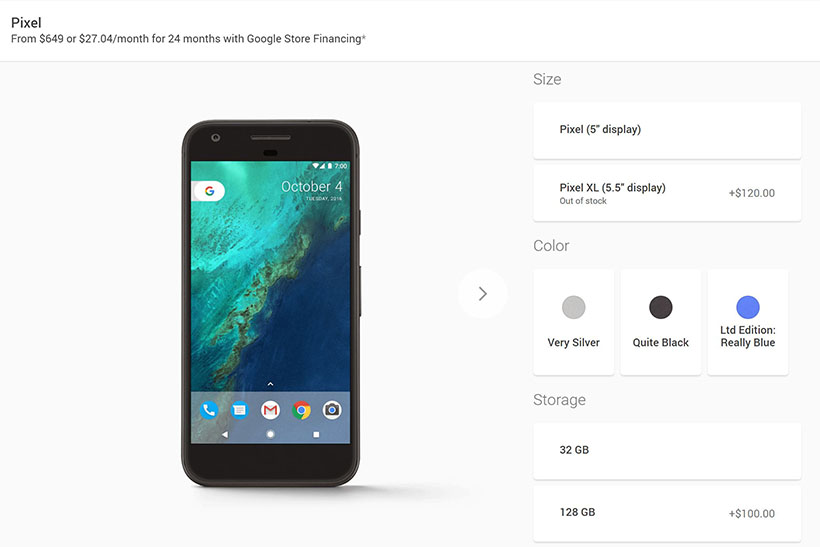 About the only thing not to like about the Google Pixel is its price tag. With the exception of the Nexus 6, Google was always the looking to disrupt the price at which a smartphone should be sold at. The Pixel, like the Chromebook Pixel, is as expensive as a flagship can get. I’m not saying in any way that the device is over-priced given the complete experience it provides, but I do find it steep for a phone with sub-par water resistance, no stereo speakers, and a less pixel-dense display if you compare it against other flagships like the Samsung Galaxy S7. 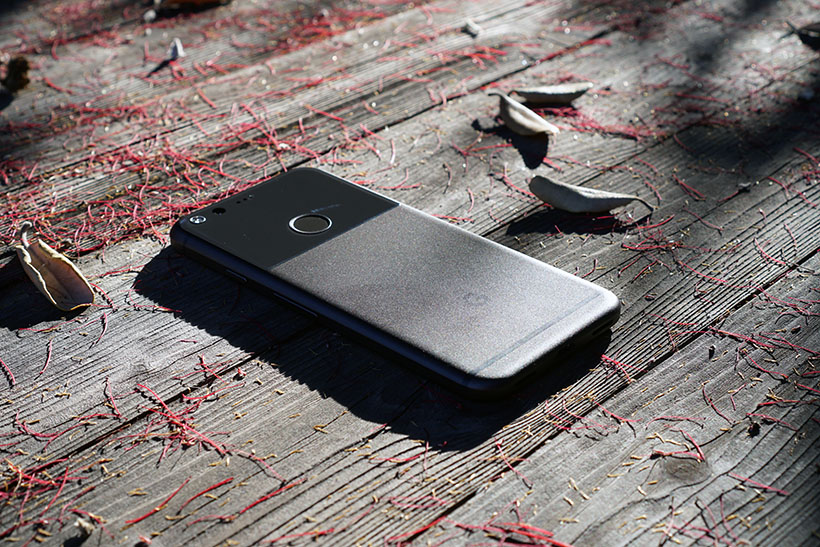 To conclude, if we were to judge the Google Pixel in a bubble, then it’s very easy to recommend this phone. We’ve got a device that’s really delicious to handle, with a very delightful experience in the software, lots of promise with the Google Assistant, and an Ecosystem that makes Android as popular as it is.

The only problem here is that sadly this phone doesn’t exist in a bubble. This is 2016, and for the same $650 that this phone costs, the new flagship mentality includes features like stereo speakers in addition to IP67 or above water and dust resistance. There are even devices like the OnePlus 3T that match the Pixel in almost every specification and delightful experience, but for a lot less money.

Google really needs to think twice about this price tag, because it really doesn’t give you all the bang for the buck you’re investing. Still, if you don’t mind the extra cash, and you’re looking for a great experience using Android, then it really doesn’t get any better than the Google Pixel, at least for now.

The phones will launch on March 4.

Samsung might bring S Pen support to the upcoming Galaxy A52 5G and A72, alongside a host of other flagship features.

An immature MagSafe ecosystem and superior water resistance of Lightning connectors are keeping USB-C from arriving on iPhones, as per Kuo.