Only 3.9 million Google Pixel phones were shipped in total in 2017, according to IDC

The stock Android-powered Google Pixel smartphone line is still only getting started, but that doesn’t make its 2017 box-office result any less disappointing.
Published 13 February 2018, 06:33 EST

Google has been dabbling in own-brand smartphone marketing and support ever since 2010, but the search giant only started taking this business seriously six years later, when the first Pixel generation was born.

Technically manufactured by HTC, the original Pixel and Pixel XL were the very first phones advertised as “made by Google”, and El Goog began investing big money in the promotion of its Nexus follow-up efforts.

The Pixel 2 and 2 XL came with even more fanfare a few months ago, but plenty of controversy was generated almost instantaneously by numerous questionable hardware choices, software issues and defects of all sorts.

Add to the equation the many delays, production woes and poor general distribution of the OG Pixel duo, and you probably won’t be shocked to hear the smartphone family’s shipments merely amounted to 3.9 million units in 2017. 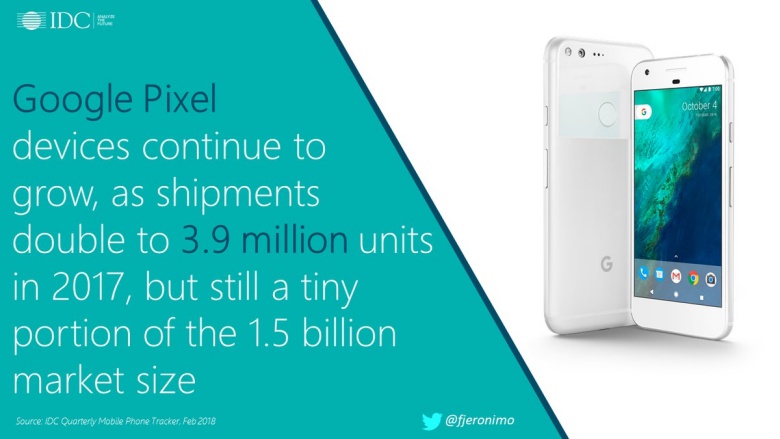 That’s for both Pixel generations, mind you, and the year as a whole, although the number doesn’t come straight from Google. Instead, it’s an estimate put together by the International Data Corporation (IDC), shared on Twitter by the company’s Research Director, which means… it’s as good as official.

There’s no point comparing this sales tally with yearly, quarterly or even monthly figures racked up by industry veterans like Samsung, Apple, Huawei and even OPPO and Xiaomi. For what it’s worth, IDC’s Francisco Jeronimo highlights Google Pixel shipments are on the rise, doubling the total of 2016 this past year. Also, the Mountain View-based titan is technically still a market rookie, with only two products in its portfolio, and their retail prices pretty much guaranteeing decent profit margins. So, yeah, 3.9 million sounds low, but it’s not that bad of a start.