It has Google Assistant integrated within it, the best camera DxOMark has seen and is available for pre-orders in five countries today.

Update: Pre-order link is below.

Google is taking advantage of “making” its hardware and the effort has manifest in the company’s new smartphone, the Pixel.

The company’s ATAP lead, Rick Osterloh, noted that Google took full charge in “design” of the phone, all of it with the split-rear design, the glass housing a fingerprint sensor and a bump-less camera hardware collective. The phone will be the first with Google Assistant integrated.

Software Product Management lead Brian Rakowski demonstrated the simple UI of the Pixel Launcher, with a new interaction of the home button — a long press will trigger Google Assistant and you can ask it to remember that time from long ago, reserve a table, play a music video on YouTube or text your friends. As its built into your phone, Google Assistant can also pull up content from within your apps. 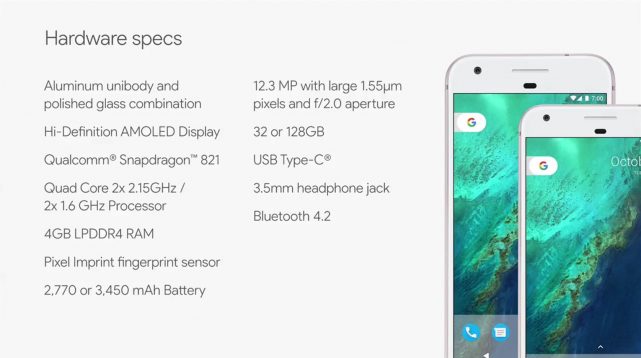 DxOMark gave the Pixel’s 12.3-megapixel camera product a score of 89, the highest score for a smartphone unit ever. It has an aperture of f/2.0 and 1.55μm pixels. The HTC 10, which had a similar hardware load, got an 88.

The image processing takes advantage of HDR+, a very quick camera app and — something welcome from last year’s Nexuses — better video stabilization with 200Hz gyroscope analysis. Speaking of the 5X and 6P, Google is offering full resolution backups of photos and videos to Google Photos.

Battery-wise, Google has improved quick charging to grab 7 hours of power in 15 minutes of charging. Seamless updates will be downloaded and installed in the background. The company is offering a “Quick Switch” adapter that can transfer all your information, including iMessages.

There are two sizes of Pixel: a 5-inch version and a 5.5-inch version. Both have AMOLED displays, the Snapdragon 821 chipset and Daydream VR compatibility. Both come in black, white and a limited edition “Really Blue”.

Pixel starts at $649 or $27 per month for 24 months. Pre-orders start today in the Australia, Canada, Germany, the UK and the US (Best Buy, Google Store, Project Fi and Verizon). India has pre-orders up on October 13.