Google Now on Tap takes an already-impressive Android feature and makes it much smarter. Siri should be quaking in her boots.
Published 28 May 2015, 18:58 EDT

A few years ago I was trying to find my way around an unfamiliar city with my friend and her husband, and I pulled out my Android phone to help us navigate the tricky terrain. Looking upon my then-new HTC Evo 4G, my friend’s husband asked, “those phones are basically just iPhone ripoffs, right?”

“No,” I replied. “Android is totally different from iOS. In some ways it’s better.”

“Yeah,” the guy shot back, “but they’re all just trying to be the iPhone, right?”

If it sounds like he was trolling me, he was – but he also meant what he said. And while he was kind of a dirtbag (they later got divorced, so screw that guy), I found it really frustrating that I couldn’t immediately shut him down with a quick rebuttal. Beyond something broad like “I have a wider choice of devices” or a weak “check out these homescreen widgets,” there wasn’t an incisive, whiz-bang feature I could point to that said “this is why I chose Android.”

Nowadays, as in 2011, there are plenty of very valid reasons people choose Android over iOS, and it shows in the market share figures. Google’s Sundar Pichai said on stage at I/O 2015 this morning that eight out of every ten smartphones shipped globally last year were powered by Android. But in the United States the split between Android and iOS is much closer to 50-50, and it’s still remarkably hard for me to quickly show people –not trolls but real people with a genuine curiosity– why I prefer Google’s platform over Apple’s. (For one of my two personal phones, anyway.)

Google Now on Tap could change all that. Announced at I/O by Director of Product Management Aparna Chennapragada, On Tap could be the biggest Android differentiator in years. And it’s more than just a golly-gee point of one-upmanship; it could very well redefine your relationship with your smartphone. As we reported earlier:

A new feature called “Now on Tap” gives Now the ability to answer questions in-app with full contextual cues. When you mention “this” or “that” Now will be aware of what you were accessing from within the parent app, and use that data for its search. The whole idea is giving quick answers to quick questions. The Now on Tap feature is triggered by a tap-and-hold on the system’s home button. Beyond answering questions, the system can automatically generate reminders for you.

That hardly sounds revolutionary –in fact, it sounds pretty dry– so let me paint you a better picture by adapting some of the examples used on stage. 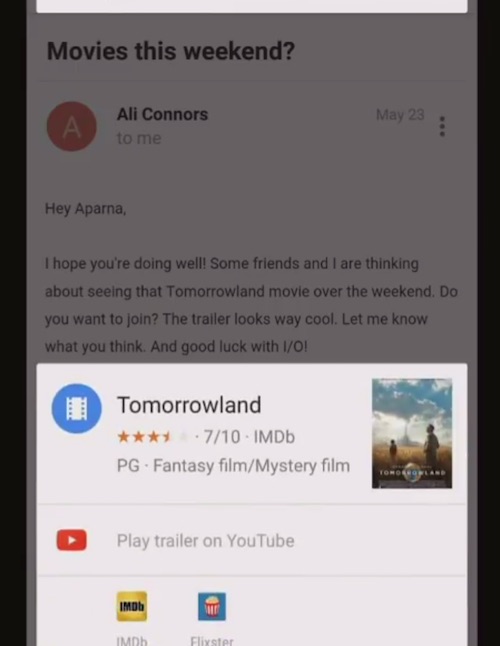 Because it’s 2016 in our created universe and Google Now on Tap has finally rolled out to your new Android M smartphone, you get a text message from a friend asking you to see the new Star Trek film – but you’re not all that sure that you trust a movie written by Simon Pegg and directed by the guy who did the Fast & Furious movies (yes, those are true facts) so you want to see the trailer before answering. Where you’d normally have to jump out of the messaging app and do a voice search, or open the app drawer and find Flixter or Fandango, Google Now on Tap makes it easier: you just press and hold the home button and a mini card overlay pops up on the bottom of the screen. Contained within it are Star Trek Beyond‘s IMDb score, rating, official poster, and links to watch the trailer on YouTube, look up the film on IMDb, or buy tickets via an app of your choice. It knows to provide these options because of context clues it gathered from the text message.

Convert that hypothetical text message into a hypothetical email that also contains a dinner invitation, and things get even crazier. Say the email goes like this: “I’m starving. Want to go to Alia for dinner? Also, I didn’t get a chance to stop by Newbury Comics on the way over. Can you handle that tomorrow?” A long press on the home button will produce two distinct cards: one containing a breakdown of Alia Ristorante –Yelp review, location, time to get there and an OpenTable link to make a reservation if you want– and the other a calendar reminder to “stop by Newbury Comics,” with a reminder time set for tomorrow. 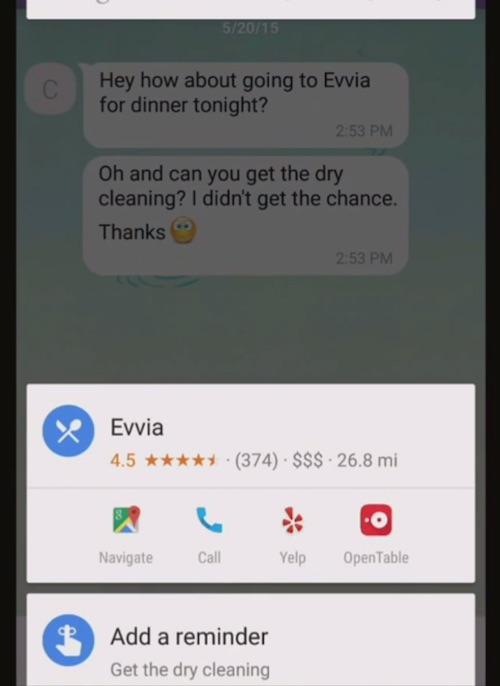 Google Now on Tap even extends this increased textual awareness to voice commands. If you’re listening to indie rock band Pinback on Spotify and suddenly find yourself wondering who the geniuses behind the music are, you can ask your phone. You can do the same thing today, of course, but the difference with On Tap is that you’ll no longer need to robotically specify who you’re talking about. Thanks to context –that magic buzzword of the day– it already knows. So you can just say, “OK Google, who are these guys?” and your phone will point you right to the musical duo of Rob Crow and Armistead Burwell Smith IV.

What makes Google Now on Tap so significant is how much access it has to the contextual data that fuels it – access made possible by Android’s architecture and therefore difficult to replicate on iOS in its current state. Now on Tap doesn’t require any action on the part of app developers to see the information it needs to operate; it won’t be held up for months waiting for apps to be made compatible. Instead, as Chennapragada told Ars Technica, it essentially “reads” the screen using the new Assistant API. 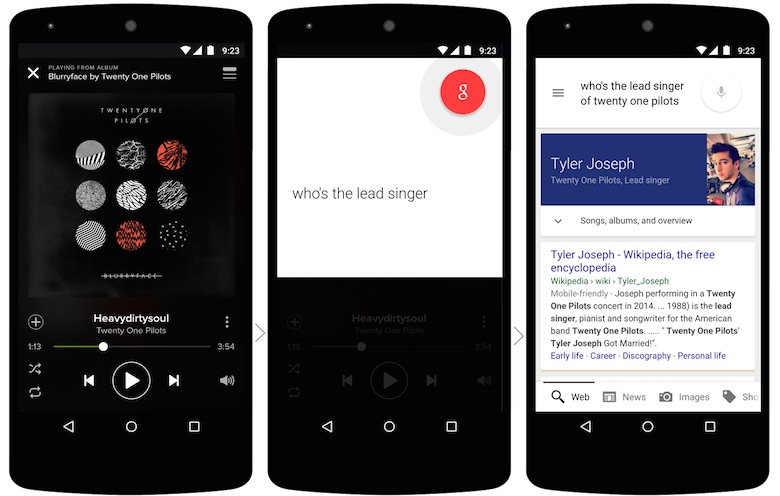 Let’s put it out there: that’s a creepy way to describe it. And to be honest, the more I think about the way Google Now on Tap works, the more I’m skeeved out by the idea of Android’s automated info-miners crawling all over my instant messages looking for ways to help me (oh, and serve me ads ‘better tailored to my interests,’ natch). But Ars theorizes in the aforementioned piece that Google’s Assistant API might allow for a third-party virtual assistant –such as Microsoft’s Cortana– to power some of these features, so I’ll hold off on the Red Alert until that gets clearer. And as usual, Google promises so much cool and potentially useful functionality with this upgrade that I’m willing to make the privacy sacrifice. Even if it requires me to boil the issue down so far that my only real solace is the hollow-sounding “if I have to deal with ads, I’d prefer them to be well-targeted.”

I’ve really only scratched the surface of what Google Now on Tap could potentially deliver. In less than two years, the existing Google Now incarnation has grown from a dubious novelty to a hugely helpful companion that now gives me everything from airplane boarding passes to restaurant operating hours to local bus schedules, not “on demand” but before I’ve even thought to demand it. Yes, I’ve also had great experiences with Apple’s Siri and Microsoft’s Cortana, but Google Now has made up for its comparative lack of personality with a startling abundance of useful intelligence. At the risk of sounding creepy once again, I’m very excited to see what happens when that intelligence is extended even further … and I’m even more excited to demonstrate it in person to the next person who asks me why I choose to carry an Android phone.

Learn more about Google Now on Tap: join us for the Pocketnow Weekly podcast on Friday May 28 at 1pm Eastern as we run down the full list of news from Google I/O 2015!

It’s the easiest phone to photograph, but it isn’t easy to photograph with. And if that matters to you, check out our LG Velvet review to find out more!
YouTube 1.8M
Facebook 570K
Twitter 197K
Instagram 133K
RSS