“‘OK Google’ is the magical key-phrase that unlocks all the wondrous potential of your Android-powered device – and drives you nuts when someone on a podcast says it and all your Android’s wake up and wait for your instructions.”

Now that my new house is built, my daily commute is over an hour long – each way. That’s okay with me. I love to drive, the scenery is beautiful, Waze helps alert me to upcoming hazards, and thanks to Audible I’m “reading” more now than I ever have before.

When a phone call comes in, thanks to the Bluetooth hands-free functionality built-in to my Prius, all I have to do is press a button on my steering wheel to answer the call, then tap another button to hang up. But what about when a text message comes through?

Earlier this month we told you about a new Google Now functionality which makes your Android-powered smartphone act pretty much like an answering machine.  Because Google rolls out updates in “waves”, the new “answering machine” functionality took a little while to propagate to everyone (most should have it by now). Now that it’s finally here, I finally put it to practical use – during my new commute. 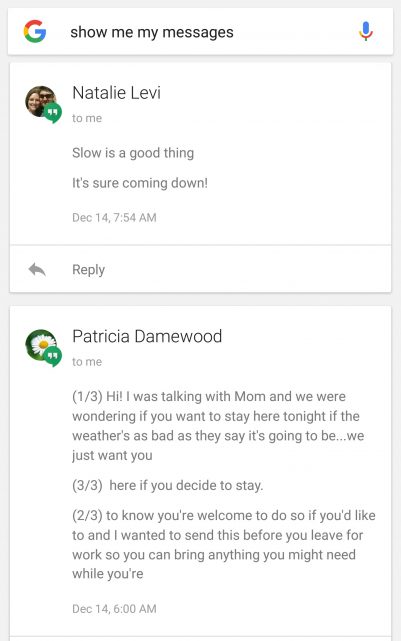 If you’re running a recent version of the Google Now launcher, when a text message comes in, just say “OK Google, show me my messages”. She’ll reply with something like this:

“You’ve got several text messages. Here are the five most recent. The first one is from (sender), do you want to hear it or skip it?”

From there it’s pretty self-explanatory. If you want to hear the first message, say “hear it”, otherwise say “skip it”. If you’d like to reply, that’s easy (and hands-free), too! Just say “reply” and speak your message.

Users are reporting that this feature works with whatever your default text messaging app is, not just Google’s Messenger app. I used Hangouts for my testing. In that configuration, instead of your last five “messages”, you’ll see the last five conversations – including multiple texts per conversation. One of ours was a 3-part SMS prefaced with (1/3), (2/3), and (3/3). The messages were delivered out of order, and Google Now/Hangouts wasn’t smart enough to reorder them based on the prefix. In fact, the prefix was read aloud as “one-third”, “three-thirds”, and “two-thirds” – in that order. However, the messages, all of them, were understandable and clear, and the “Google Voice” was pleasant and surprisingly not-robotic.

Is this ground-shatteringly cool? Nah. Siri’s been taking care of iPhone users for quite some time now and Google is playing catch-up with Android. But the feature sure is handy, and it helps me keep my hands on the wheel for one more tasks on my commute! Good job, Google!

Now, what’s this we hear about dumping SMS from Hangouts?

Facebook seems to be unifying the messaging experience across all its apps.