Thanks to a dedicated and ingenious software engineer, the archaic Google Nexus S can be hacked into to jump on the Android Marshmallow bandwagon.
Published 12 November 2015, 04:07 EST

This is madness. This is… the beauty of the open-source Android ecosystem, software tinkering, and the impressive result of a greatly resourceful developer’s hard work. After a certain flintman managed to port Marshmallow onto the long forgotten webOS-powered HP TouchPad last week, an experienced engineer by the name of Dmitry Grinberg pulled off what looks like a much stabler 6.0 firmware for the Nexus S.

We don’t expect many of you to still have a “Crespo” around, as it debuted in stores way back in December 2010, with official Google support halted following an Android 4.1 Jelly Bean update in October 2012. October. 2012. Ponder that for a minute or two.

Since then, no less than three major OS iterations came to light, and each was tweaked to run on the Samsung-manufactured single-core 4-incher, despite the vintage bad boy offering just 512MB RAM.

How hard was it for Mr. Grinberg to “demo that old hardware can in fact run new versions of Android?” Let’s merely remind you the Nexus S allocated a gig of its on-board storage to vital system files, and the other 15GB of space for things like photos, videos, non-essential apps and games. 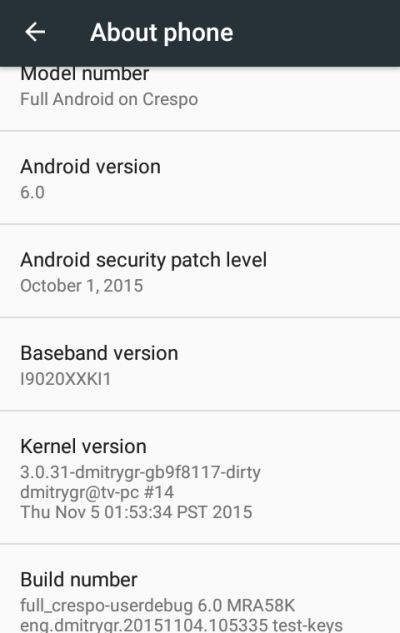 Basically, the phone had an internal SD card, and it was clearly a challenge to load up Android Marshmallow there. At the source link below, you’ll find a hefty list of “cool hacks” required to get everything up and running, as well as your own build instructions, and flashable image downloads.

If you don’t know your way around a custom port, it’s best to keep away, although it’s not like you’ll void your warranty or lose a lot of money in case of device bricking.