We go hands-on with the tablet made for “movers & makers” in our Google Nexus 9 unboxing. Join us, won’t you?

Google’s newest tablet is for “movers and makers,” according to the company’s website. We’ll examine more about what exactly that means in the weeks ahead, but for now, we’ll settle for getting to know the shell of the device in our Nexus 9 unboxing.

The de-packaging experience itself is best described as minimal. The Nexus 9 comes in a fairly nondescript box with bare-bones branding calling out its Android ancestry, and once you get inside all you’ll find is some very low-key literature and a USB charging cable with wall wart. 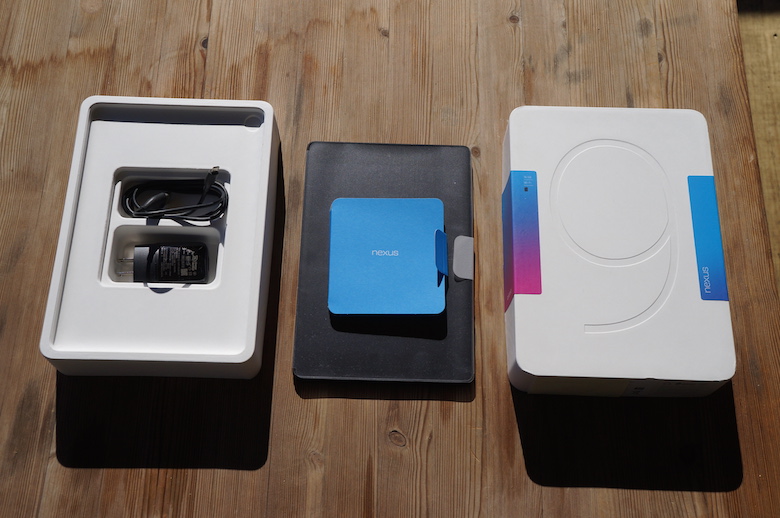 That wall adapter’s design will be familiar to any HTC owners out there, because the Nexus 9 is an HTC product built to Google’s specifications. It falls directly between the ASUS-made Nexus 7 and Samsung-built Nexus 10 in size and even finish, with the soft-touch casing more rubbery than the smaller tablet’s, but not nearly as tacky as the larger one’s. The hardware is nice and thin at 7.9mm, and fairly lightweight at 436g. There’s a countersunk 8MP camera around back, metallic accents around the sides, and front-firing speakers flanking an 8.9-inch IPS LCD on the face. You can wake the Nexus 9 using either the side key or a double-tap to the Gorilla Glass 3.

That double tap brings you right into Android Lollipop, and here our experience diverges from some of the other videos you might’ve seen thus far. Our review unit is running a much earlier build of Lollipop, with dogfood editions of core apps and a launcher with an annoying tendency to crash for no reason. Obviously this isn’t the final release of Lollipop that’s going out on retail versions of the Nexus 9, so while we wait for our unit to receive an update, we’ll leave you with some lightweight impressions from our first hour with the device. You can find those, as well as some sweet Nexus 9 closeups, in the video below.

Note: The Nexus 7 (2013) was manufactured by ASUS, not LG as stated at 0:42 in the video. We regret the error and have corrected it with an annotation.