The mother of all leaks: Everything about the Google Nexus 6P is out in the open

The only thing not yet established about the Google Nexus 6P thanks to rumors and leaks is the phone’s price, with every little feature set in stone.
Published 28 September 2015, 04:19 EDT

But now all the inside information has come together in one monumental exposé, mere hours ahead of the grand San Francisco press event where the LG Nexus 5X is also expected to once and for all confirm the recent rumor bonanza.

Anything that this cluster of slides for “reviewers and presenters” doesn’t reveal or corroborate? Actually, yes. There’s no mention of price tags, essentially the only major question mark left unanswered, and a commercial launch date is likewise missing, although October 5 has been bandied about of late. 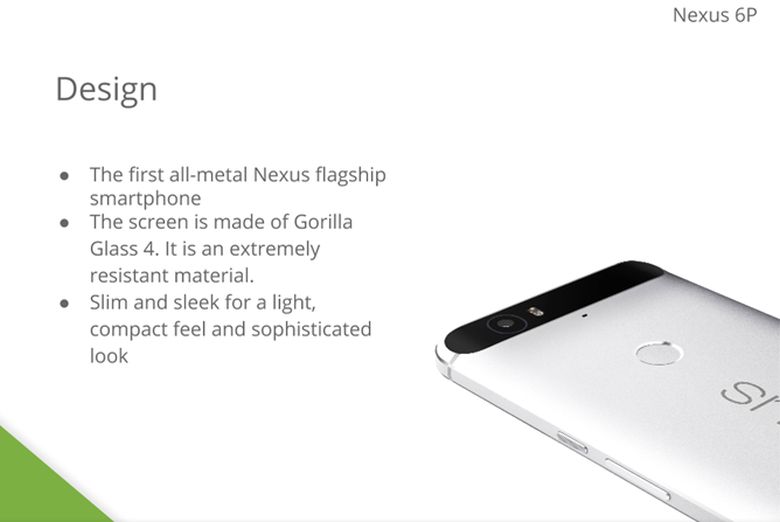 The “slim” metal unibody is brought up more than once in the internal documents as a main differentiator between the Nexus 6P and previous vanilla Android-running handhelds, and we must admit the somewhat controversial design is starting to grow on us.

The camera hump is less conspicuous than back when the first live pics made their way online, and since it promises stellar low-light performance, we’re no longer bothered by the rear snapper’s sub-flagship 12.3 megapixel count.

Around the front, you’ll get 8MP for the best possible selfies, as well as dual speakers for top-notch sound. The circular fingerprint sensor placed on the back’s phone is said to “match a natural grip” and will register different profiles for more than one user, while the USB Type-C connector should ensure “faster charging and quicker data transfer rates” in addition to basic reversibility. 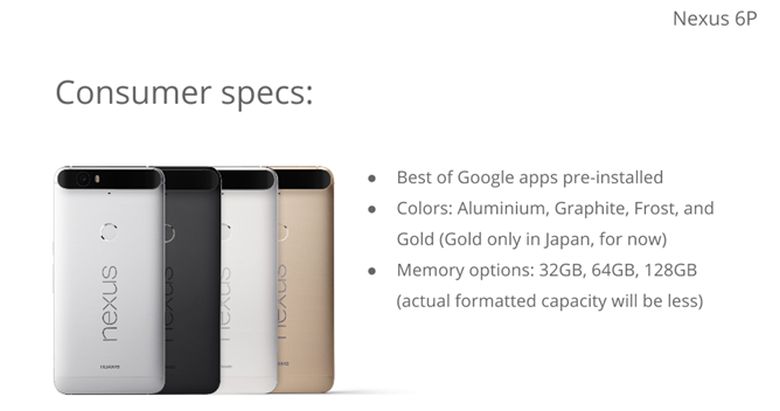 At 178 grams, the Nexus 6P is comfortable enough in its skin to pack a massive 3,450 mAh battery, good for “all day and into the night” endurance, capable of quick charging, and optimized for higher energy efficiency with a new Android Marshmallow feature called Doze.

The aluminum, graphite, frost, and gold color options are (un) officially set in stone, the same for 32/64/128GB storage, as well as Gorilla Glass 4 screen coating, and a 7.3mm waist. Not too shabby!