Worrying number of Nexus 6 owners are encouraged to ‘update’ from Android 7.1.1 to 7.0

There’s apparently no end in sight for nagging software issues on Google’s original Nexus 6, now plagued by a bug switching Android 7.1.1 with 7.0.

Quick reality check. Google’s software and hardware support for both Nexus and Pixel phones, as well as the latter family’s retail availability, have been disastrous these past few months. No point beating around the bush, and no more cutting the search giant slack because the Pixel XL looked so good… on paper.

But just when they thought things couldn’t get any worse, devoted users of the original Nexus 6 were apparently hit with another unpleasant surprise. By far the weirdest of them all, this proposes a system update to… Android 7.0.

Now, you may remember how the 2014-released Motorola phablet was left waiting for an official invite to the Nougat party a frustratingly long time. But eventually, the crucial over-the-air OS promotion came, and eventually, the bugs that came with it were quashed. 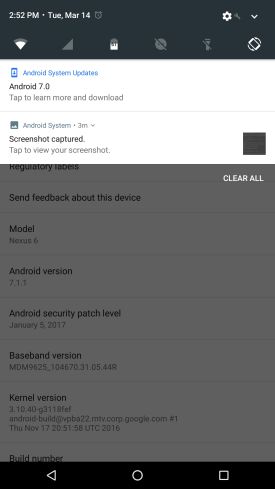 Then, Android 7.1.1 was also (eventually) delivered to the Snapdragon 805 6-incher, not without its own share of pre and post-rollout glitches. So, why go back to 7.0 all of a sudden? To end up with a “100% unusable” device that “spam crashes on everything”, according to understandably irritated Nexus 6 owners. Enough of them to deem this a relatively widespread issue (another one), some backing their claims with damning visual evidence.

For the time being, the obvious “fix” is to simply ignore the update notification. Unless you’ve already installed the thing, in which case you might be in a world of trouble.