For the first time ever, Google’s new Nexus is not one phone, but two – so for the first time ever, those in search of a new pure-Android smartphone have a choice to make. In today’s faceoff, affordability goes up against capability; polycarbonate squares off against aluminum; and the purest Marshmallow around bellies up to its mushy twin. Join us for the return of the Nexii in Pocketnow’s latest comparison: Google Nexus 5X vs 6P!

Carrier agnosticism has been woven into the Nexus line’s DNA since day one. Nexus phones are sold unlocked, directly from Google, so while they’re priced quite competitively they’re also generally more expensive (up front) than what you might see from a wireless carrier selling a similarly-specced smartphone. While you can finance either of these through Google’s Project Fi, that’s still an invitation-only program; most folks will just be buying their Nexuses outright. And that means people stand to save at least $120 by going for the 5X ($379 starting price) instead of the 6P ($499 starting price). Let’s see how much you’ll really miss out on if you opt for the cheaper of the two.

The most striking difference between these smartphones is in their respective displays. This isn’t really about resolution, even though the Nexus 6P offers a pixel density 22% higher than the 5X on a screen a half-inch larger (5.7″ @ 518 ppi versus 5.2″ @ 423 ppi). More important here is the difference in technology: the sharp contrast and heavy saturation of the AMOLED panel on the 6P make the 5X look washed-out and lifeless by comparison. The 5X nonetheless has two advantages: its warmer whites are preferable to the sickly blue-greens of the 6P, and the 5X panel is also more readable in direct sunlight. (We’re aware that the comparison video above appears to show quite the opposite situation, but this is due to technical limitations of our camera equipment.) In the end, the 6P’s colors are so rich that everything just looks more alive on the larger phone. If you’re a display junkie, your decision here will likely be an easy one.

Flip around to the back side and the gulf widens. As we mentioned in our unboxing post, the 5X is LG’s sequel to the Nexus 5 of 2013, and as such it features a casing made from injection-molded polycarbonate. That means it’s soft to the touch and very lightweight – almost too light at 136g. Huawei, by contrast, had no Nexus legacy to call on when designing the 6P; as such, it drew on the all-metal roots of its Ascend Mate line to produce something quite different. At 178g, the Nexus 6P is 30% more massive than the 5X thanks to its machined-aluminum chassis, whose chamfered edges are also a bit harsher on the palm. The Huawei phone is also significantly taller and wider, so it’s the less-convenient choice for those who often need to use their phone one-handed. It is thinner, though, than the 5X (7.9mm vs 7.3mm) – and that combined with its higher-end industrial design makes the 6P feel every inch the more expensive handheld.

The pronounced optical window stretching the width of the 6P’s chassis might make you think that Huawei’s got the superior camera here as well – but in this case appearances deceive. These phones pack the same exact Sony IMX377 camera, which mates a 12.3MP sensor with an f/2.0 aperture, laser-assisted autofocus and 4K video recording.

On their respective screens, the difference between the 5X’s photos and the 6P’s is striking … but this is another deception brought about by the display disparity. Take the pictures off the phones and put them side by side on the same monitor, and more often than not they appear nearly identical. There’s the occasional difference in exposure or white balance, but these are so minor that they can be explained by minute deviations in focal point or in small variations in lighting in the few seconds between captures. If you’re really looking for a consistent difference here, maybe try to spot the green tint in a few of the 6P’s photos, which for some reason becomes more pronounced when using the flash. (See comparison video above for specific examples.)

The Huawei phone makes up for this apparent quirk, though, with a higher-resolution selfie camera (8MP vs 5MP) that does a much better job in both daylight and low light. The 6P also includes an intelligent burst mode, a higher frame rate in slow-motion video and electronic image stabilization, all of which the 5X is forced to go without.

Google says the 5X lacks those added camera features because its hexa-core Snapdragon 808 processor doesn’t pack the oomph of the octa-core Snapdragon 810 in the 6P. That power imbalance carries over across the spec sheet, actually: the Nexus 6P offers 3GB of RAM to the smaller phone’s 2GB, and it’s faster memory to boot (DDR4 vs DDR3). The Huawei phone also comes in larger available storage options (32/64/128 GB vs 16/32 GB), and it brings a battery that’s 27% larger (3450 mAh vs 2700 mAh).

Sometimes these spec differences affect the real-world experience and sometimes they don’t. Each phone runs Android 6.0 Marshmallow, whose feature load is almost identical across devices (which is why there’s no dedicated Software section to this article). So in a side-by-side comparison there’s very little difference in the usual metrics like app launch times, and in gaming it’s tough to see a difference outside of very high-demand titles like Asphalt 8 – even then, we’re only talking an occasional dropped frame here and there. Where the 5X stumbles a bit is in everyday animations; the 6P seems to have smoother inertial scrolling in Chrome, for example. It’s just that little bit of extra polish that reminds you you’re using a higher-end device. That polish is much more pronounced on the acoustic side of things: with its dual front-firing speakers, the Nexus 6P is the hands-down winner in out-loud playback, besting the single speaker on the 5X.

At press time, we’ve yet to complete extensive battery or network testing. For one thing, we just haven’t had the phones long enough. And for another, these devices are on two separate networks: we’re using the 5X on T-Mobile US and the 6P on Project Fi. So a direct comparison just isn’t possible at this point. Rest assured we’ll cover these aspects and many more in our full reviews coming soon.

Lastly, there are the minutiae: the little idiosyncracies that make each phone special. Both of these large devices have their power/standby keys awkwardly located above the volume rocker rather than beneath it, but the 6P makes that arrangement a little more tolerable with a textured finish on the power button to help tell them apart. The 6P also pulls ahead where glass is concerned: it uses Gorilla Glass 4 on both the display cover and the camera “visor,” while the 5X makes do with the older Gorilla Glass 3.

But the Nexus 5X comes from behind for a small but important win to some folks: its square notification light, nestled behind the speaker/microphone grill below the display, is both larger and brighter than its top-mounted counterpart on the Nexus 6P. 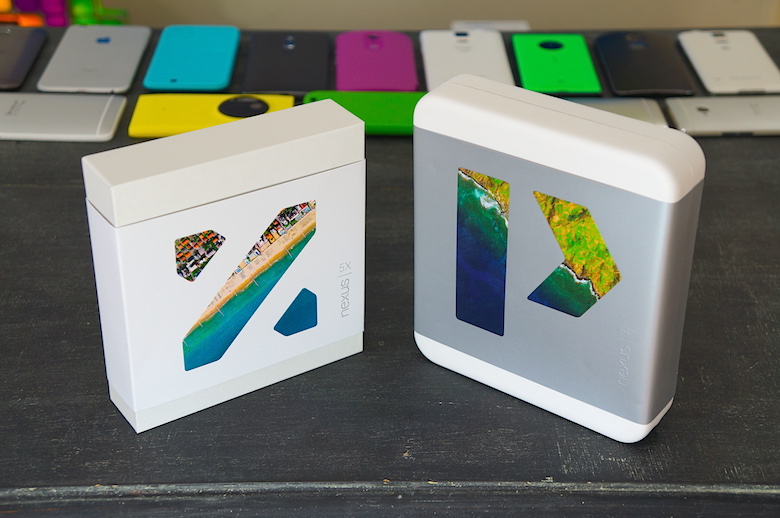 The takeaway here is a duo of clichés: Google has come very close to delivering the best of both worlds, but that doesn’t change the fact that you get what you pay for. The Nexus 5X is very much like its 2013 predecessor in that it delivers a lot of capability for a very competitive price point, and it manages to do so while still looking fairly sharp. But the 5X is no show horse. It’s the phone you toss around without worrying about scratching it up; the one you buy because it’s a good deal, not because it’s delivering a premium experience. If a high-end look and feel is what you’re searching for, the 6P is the way to go. It’s got a much nicer screen, a more powerful processor, better fit and finish, and block-rockin’ audio; you just need to shell out a bit more to get it.

If you’re thinking that’s an obvious conclusion –spend more to get more– you’re right. Not all comparisons end in profundity. But it is exciting that, for the first time in Nexus history, buyers have a choice between sensible affordability and flagship quality in the same generation. And the differences here are straightforward enough that choosing shouldn’t be hard at all, as long as you know what you want out of your smartphone … and how much you’re able to spend.

We’ll be filling some of the data gaps in this comparison very soon in Pocketnow’s full review of the Nexus 6P and 5X! Drop a comment below letting us know what you’d like us to cover in those reviews, and keep your Nexus hunger sated in the meantime by living vicariously through us as we unpack these devices in our double-unboxing, live now on the front page!

Check out everything you can get with the recently announced Pixel Pass, Google’s new service bundle subscription program