Could the Google Nexus 5 unseat Samsung as the top Android dog?

Can the Google Nexus 5 unseat Samsung from its dominant place in the smartphone industry? Probably not, but it can set a trend that OEMs might not like.

Funny thing about Samsung. Samsung has become what amounts to be the superpower in the smartphone industry.  Once dominated by Apple’s iPhone, Samsung has handily dethroned the bitten fruit and claimed the crown for itself. One way it has done this is by producing an avalanche of mobile devices from tiny smartphones, to gigantic tablets and literally every size in between. If you have a hand, regardless of the size, Samsung has a phone that can fit into it.

Google however, is starting to turn some heads of late. Google’s line of Nexus devices comes in all shapes and sizes – traditional shapes and sizes that is. From the 4” Nexus 4 to the 10” Nexus 10, Google pretty much has had the basics covered for over a year now. Most recently Google released the much anticipated Nexus 5 with its modern day, high end specs keeping pace with every other smartphone out there. But Google has a number of things going for it that Samsung, and other OEM’s do not. The most obvious advantage Google has is in the price of its offerings. Both the Nexus 7 and the Nexus 5 have price tags that are way up the field from the rest of the competition. 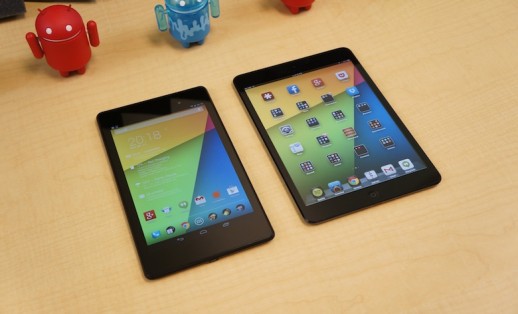 The closest tablet to compare to the Nexus 7 in today’s mobile space is arguably the iPad mini, itself a recent offering. But, as has been noted in an earlier editorial, the iPad mini comes in at almost twice the price as the Nexus 7 and just plain looks silly in competition with its older and cheaper rival.

Similarly, the Nexus 5 comes packed with a bevy of high end smartphone specs, with its closest competitor being the LG G2, since they pretty much both rolled off the same assembly line. It could also be compared to the Samsung GS4 or many of the other flagships popping up these days. The one thing all these flagship phones have in common is they can’t come even close to the $350 off-contract price tag that comes with the Nexus 5.

Our own Joe Levi discussed this pricing structure in our last Pocketnow Weekly podcast. Basically the gist of it was that while Samsung, LG, and other OEMs subsidize with contracts, Google subsidizes with eyeballs. It is doubtful that Google is making much, if any money on the sales of the Nexus 5 device itself. Any profit is likely flying straight to LG to cover materials and manufacturing costs. But what Google does get from this arrangement is the time in hands, monetizing just about everything about you. Of course, that’s a whole different conversation.

One thing about the Nexus line of phones is that, until this release, the specifications were generally pretty unimpressive. But it seems LGoogle (I love it when names fit together so nicely) pulled few punches this time around. Combined with the silly-low price tag, Google could be in a good position to potentially take a bite out of Samsung’s stranglehold on the smartphone space.

Things are looking up

There are a lot of advantages to the Nexus line after all. First of all, there is the price. We don’t really need to talk about that any further. It’s already been done to death by me and others. Suffice it to say, it’s pretty dang cheap.

The second major advantage would be fast updates. Since the Nexus phones aren’t being sold by carriers, there is little to no accountability to those carriers. Therefore when an update is ready to roll, it rolls. There is no waiting for carriers to test, no delays. It’s a beautiful thing.

Third, and also because of the lack of carrier involvement, Nexus phones come without a contract. There is no need to sign two or three years of your life away with this phone, which can make it more appealing to some consumers. Boy, those carriers sure do love to screw things up, don’t they? 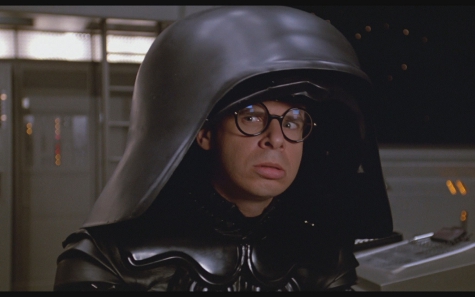 There’s two sides to every schwartz

However, that advantage also highlights one of the two major disadvantages. Most notably, the Nexus 5 is not being sold by any carrier, at any store, anywhere. As far as the representatives at AT&T, Sprint and T-Mobile are concerned, there is no Nexus 5. This point cannot be understated. When consumers are looking for a smartphone, one of the few places they’ll head to is the carrier retail store to get some hands on time with some of the sexy that’s out there. With no presence in retail stores, the Nexus’s growth potential is severely limited.

Then there is the lack of carrier subsidization. While $350 isn’t a big deal compared almost every other smartphone’s off-contract price, it’s still almost twice most flagships’ on-contract price. This could be a tough sell to the money-conscious who don’t have commitment issues. 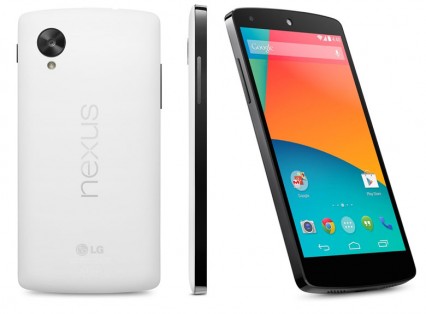 This is not the OEM you’re looking for

Last but not least, let’s not forget that Google, as an entity, is not an OEM. There is a reason why Google contracted the services of LG to make the current breed of sexiness. Personally, I think Motorola should be tasked with making future Nexus editions. It only makes sense. But as it stands, LG has Google’s back in this.

Bottom line, for today, the answer to the question, “Could Google become the next Samsung?” is complicated. Right now, probably not. Samsung has its britches pretty firmly ensconced in the smartphone overlord’s throne, and probably will for some time. A cheap and powerful Nexus phone will do little in the short term to unseat the royalty. Long term though, Google is creating a buzz around its Nexus phones which has grown more and more steady with each passing year. With the latest offering standing toe to toe with its major competitors at almost half the price, there could be some heat felt by OEMs to start really examining their product lines and associated costs.

So, while I don’t think Google is going to make major consumer waves with this offering, it is setting a significant precedent on terms of cost and that could lead to a revolution in the industry in the years to come. In the meantime, the Nexus 5 is on sale, and cheap, and while our review is still pending, it’s safe to say the phone is no slouch, and it makes this Windows Phone boy drool just a bit. So let’s root-root-root for the home team, and hope that Google can continue this trend. It may not be so good for the OEM’s, but it could be a very good thing for you and me.