Google Maps v7 makes saving maps for offline use more difficult than it was before. You still can still take Google Maps offline, and we’ll show you how.
Published 22 July 2013, 07:30 EDT

When Google Maps for Android was originally announced, it lacked one very important feature: offline mode. On the surface this wasn’t a big deal, after all, we are always connected to the cloud when we’re on our smartphones, right? Unfortunately, no, we’re not, especially when it comes to navigation. Driving through rolling hills in the middle of Nowheresville, USA or even through urban canyons, cellular data can be slow, or absent completely. For people depending on their smartphone’s navigation suite to get them from point A to point B, they could quite literally be lost. We needed a way to taken Google Maps offline.

Luckily we got an update from Google that allowed us to take a square section of the map and save to our phones and tablets. The process to do so was never elegant, and downloading up to ≈80MB map segments took a very long time. However, this feature was shouted from the proverbial rooftops by many inside Google when the feature was originally announced.

Those of us who travel long distances without cellular data coverage were ecstatic, everyone else pretty much didn’t care. Nonetheless, with the recent update to version 7, the ability to download maps for offline use was lost.

The new look and feel of Google Maps for Android is a radical change from what we had before, and is further proof that the company is moving the platform to a card-based UI. Unfortunately, the ability to save maps offline isn’t in the same place as it was before. Initially, it wasn’t there at all. A quick Easter Egg surfaced that let us save maps offline quickly and easily. 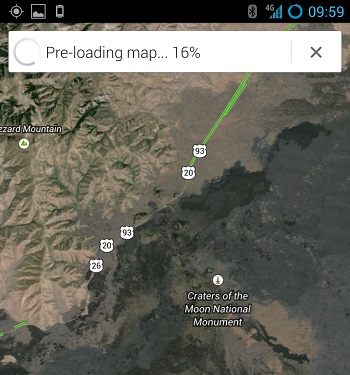 Zoom in or out until the area that you want to cache for offline use is displayed on the screen, type or say “OK Maps” in the search bar, then hit the Search button. You’ll either be shown a message that your map area is too big and you need to zoom in, then repeat the “OK Maps” process again, or your map will begin “Pre-loading”.

Sure, it’s not obvious, but this, in my opinion, is the easiest and quickest way to save map data for offline use.

If you go crazy and save too much stuff offline, I suspect you’ll have to clear all of the app’s data from the Apps Settings to do so. There isn’t an option inside the Maps app to clear specific maps, or even all cached maps. 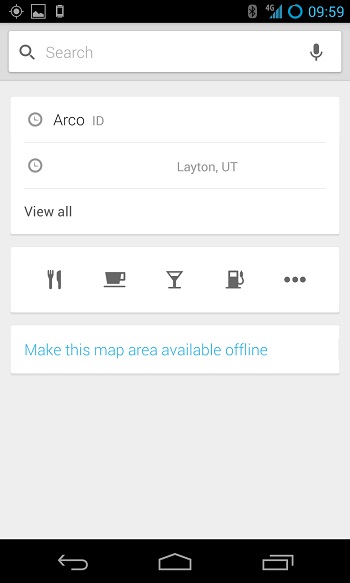 Not long after the initial v7 release, Google released an update that added an option to “Make this map area available offline”. Unfortunately, this option isn’t clearly visible, and isn’t present in all the search views. If you can see it, you’ll have the same experience as using the “OK Maps” method mentioned above.

Regardless of which method you choose, saving maps for offline use is not only a good way to make sure you have access to the data you need when you need it, but it’s also a great way to reduce your data usage and speed things up when you’re out and about.

Give it a try and let us know what you think about offline Google Maps in the comments below.