How Hangouts Will Change the Way I Communicate

On Wednesday, Google re-branded its Talk messenger service to Hangouts. How will the Google Hangouts app change how we communicate? Read on to find out!
Published 17 May 2013, 06:00 EDTUpdated 01 April 2021, 14:30 EDT

At the opening Google I/O 2013 keynote, Google revealed that it would be taking a much different approach to the developer conference than it had in years past. It was less about consumers and consumer products, and more about services and developers – as it should be.

Many were upset over the lack of new hardware and the lack of a true point update to the Android operating system. But as I explained in an editorial on Wednesday, there was much more to the keynote than what initially met the eye. It was about updating the OS in a way all existing users (or every user on version 2.2 and above) could experience the new features without waiting for a painstakingly slow update process. We had to wait minutes – maybe a few hours – for updates, not months. And the features and updates Google announced would be out in the coming weeks will also be available to almost all Android users at the same time – immediately.

Among the various products and updates announced was one we’d heard rumors about for months now: Hangouts. Rumored as the all-in-one messenger dubbed Babel, Hangouts isn’t exactly what we thought it would be. It’s not a universal messaging service that brings all Google communication services into a single app. 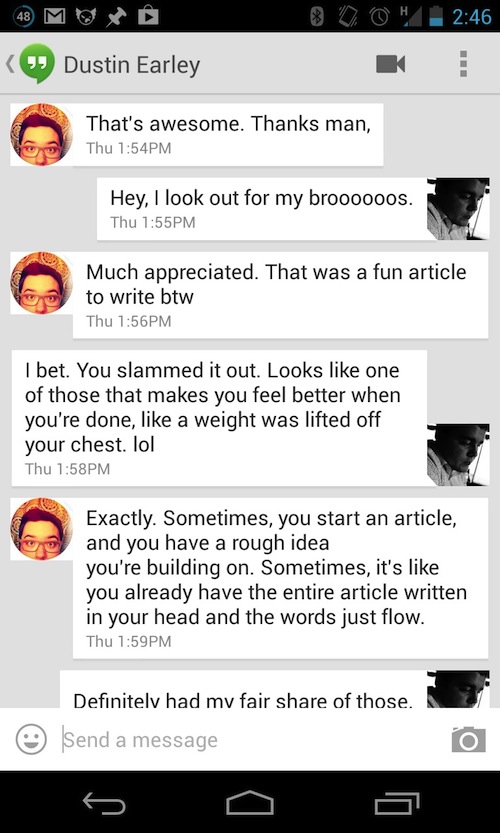 To be frank, in its current state, it’s nothing more than an updated Google Talk service with video Hangouts built-in. The major difference is how it looks and the fact that we finally got a decent (and official) app for iOS.

But there’s something different about the service as a whole. It’s no longer the long lost forgotten chat service created by Google. It’s been brought into the 21st century and finally has some much-needed functionality. And, moving forward, Hangouts will almost certainly impact the way I communicate via mobile.

In fact, it already has. I’ve already noticed a difference in how I’m messaging with friends, colleagues, and coworkers. I imagine I would use it with family, too, if any of them actually used Google+ or Gmail.

No less, my usage of Hangouts (Talk) has easily doubled or tripled – maybe even quadrupled – since Wednesday. And I don’t necessarily consider this to be due to the newness of the service. After all, on the surface, it’s not all that different from Talk. But there are now two core changes: the ability to send pictures and tight-knit integration with Google+. 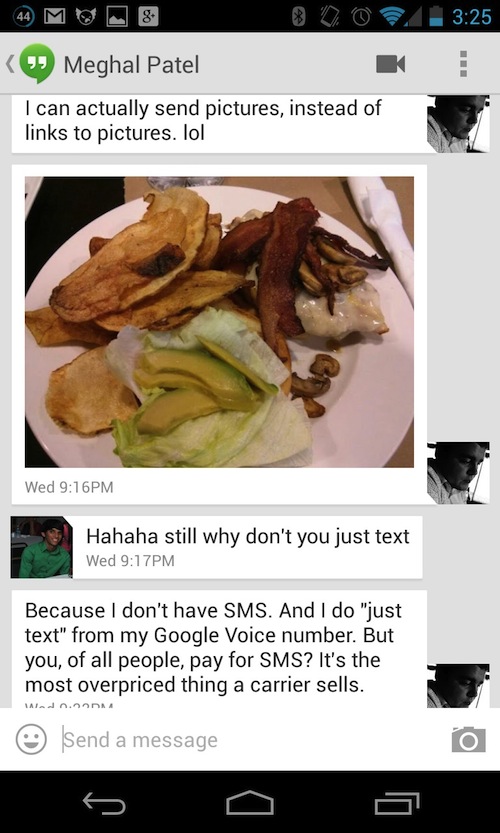 For almost an entire year now, I have gone without paying for carrier SMS. In turn, I’ve gone without MMS. I turned to Google Voice for my SMS needs, and I’ve relied on an array of services for sharing pictures. I usually upload a picture to Dropbox, share the link to a URL shortener (else, the links are sometimes separated into two text messages, which is insane) then paste the shortened link in a Google Voice text message. And clicking this takes them to the browser, to my Dropbox account, where they can see the picture.

In short, it gets the job done, but it’s pretty rough around the edges. It’s a lot of steps just to share a picture; I can’t send pictures to family members without smartphones; and most of my friends get tired of the way I share pictures. Hangouts doesn’t allow me to MMS my family members with dumb phones, and people will continue to send MMS to my Google Voice number, where the messages and pictures get lost in limbo … indefinitely.

But most colleagues and coworkers already use Talk. So the switch to Hangouts was seamless. Many of my friends also casually used Talk before. Now every time one of them sends me a text on Google Voice, I tell them to use Hangouts. And slowly but surely (maybe with a little reluctance), they’ve been moving over, too.

The eventual idea is to have as many of my friends and colleagues on Hangouts as possible, so that I don’t have to rely on Google Voice as much.

I estimate 90 percent of the messaging from my phones since Wednesday afternoon has been done using Hangouts. And that’s something I hope stays that way. I’m really loving the changes and fully believe this could truly be Android’s BBM. Of course, that’s sort of what it’s always been. But being powered and backed by one of the world’s largest (and one of the fastest growing) social networks means that Hangouts are more than just another IM service. It will become a staple in communication for Android, and maybe iOS, too, eventually.

One of the biggest problems with Talk before was that it really wasn’t related to Google+ … at all. Google+ had (and still has, for the time being) its own instant messaging service, Messenger. But now the fate of Messenger is clear: it’s to be replaced by Hangouts, which are now fully integrated with Google+.

This means chatting with a large group of people has never been easier. Seriously. It’s as simple as starting a conversation with one of your Circles on Google+, or starting a Hangout with a friend and adding some more by name. It works much better than group SMS (also something I can’t do with Google Voice).

More importantly, mobile video Hangouts have never been easier either. I’ve been using video Hangouts more and more since starting here at Pocketnow. I rarely go a week without jumping on at least a couple Hangouts. (I’ve already been on two live Hangouts this week.)

There is a major drawback to all of this, however. With the open ability for anyone who has me circled on Google+ to message me or invite me to a video Hangout, it’s circumventing the need for my email address or cell phone number to directly contact me on my phone. As much as I love interacting with readers, it almost feels like an invasion of privacy. Literally, anyone can send a message directly to my phone … without my permission.

Google has added the option to limit who can Hangout with you. People you do not follow must request the ability to Hangout, while those you have circled can Hangout at will. The issue is that the filter, so to speak, doesn’t always work well, as evidenced by the image to the right.

What’s so exciting about Hangouts, isn’t what the app or service is today. Sure, everything about it looks more clean and user-friendly, its functionality is greatly improved, and it’s everything Talk should have been two or three years ago.

What is exciting, though, is what Google can (and likely will) do with Hangouts. Google’s Dori Storbeck confirmed (before retracting the statement) that SMS would be integrated with Hangouts at some point.

My hope is that it will become an all-in-one messenger, a one-stop shop for carrier SMS, Google Voice, instant messaging, video Hangouts, and possibly even more. I’m tired of everyone always using a different service for messaging. I’m ready for a truly cross-platform, all-in-one offering that everyone uses.

Google has the capacity to pull it off, and there’s no reason it shouldn’t.